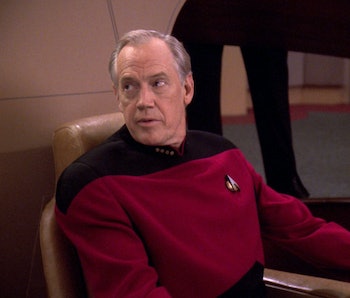 The worst starship captain in Star Trek history is back. But will Edward Jellico (Ronny Cox) return as a great Star Trek villain, or will Jellico’s comeback actually prove that this guy was never all that bad? Here’s why new episodes of Star Trek: Prodigy could be the second coming of Jellico.

The science fiction filmography of Ronny Cox established a certain kind of science fiction villain. In both RoboCop and Total Recall, Cox played a specific kind of insider baddie, a person who works for the establishment, but has a darker, amoral side. So, when it came time to cast a gritty temporary Enterprise captain in The Next Generation’s famous 1992 two-parter “Chain of Command,” Ronny Cox was perfect. At first, Jellico seems like a bossy chump, but, by the end, after Jellico outwits the Cardassians, Riker, Troi, and the crew all gain begrudging respect for Jellico, even if they don’t like him.

The existence of Jellico as a one-time, cranky captain of the Enterprise is a long-running inside joke in Trek fandom. The popular Twitter account “Captain Edward Jellico” (@STDeltaShift) frequently posts memes of Jellico telling pun-laded dad jokes to Riker, Data, Troi, characters from other Trek series, and sometimes, other franchises. In Lower Decks Season 1, Mariner quips that when the Cerritos is assigned a temporary captain, she’s worried about a “babysitter Jellico type.” So, in bringing back Jellico to Star Trek: Prodigy, showrunners Dan and Kevin Hageman totally knew what they were doing.

As revealed at New York Comic Con 2022, the upcoming 10-episode second half of Prodigy Season 1 will introduce a few new characters, including She-Hulk’s Jameela Jamil as the voice of Ensign Asencia, a navigator on the USS Dauntless. At this point in Prodigy’s storyline, the teen heroes on the USS Protostar are actually being pursued by the real Admiral Janeway (Kate Mulgrew) on the Dauntless, even though a hologram of Admiral Janeway is assisting them. Enter Edward Jellico (Ronny Cox), who is also an Admiral now, since Prodigy is set in 2383, about 14 years after Jellico’s last appearance in The Next Generation.

This detail is interesting, simply because of Admiral Janeway’s role in Prodigy at this point. We know Janeway is pursuing the USS Protostar because Chakotay (Robert Beltran) was previously in command of it. But this put her at odds with the heroes of the show, and in a sense, makes Janeway an accidental enemy of the crew.

So, if Jellico is trying to reign in Admiral Janeway, or, trying to get her to lay off the Protostar, he could end up being the good guy here. The larger Prodigy story, so far, relies on several people missing key pieces of information. Dal (Brett Gray) doesn’t know where he comes from. Gwyn (Ella Purnell) lost some of her memories. Admiral Janeway doesn’t know what happened to Chakotay, and Hologram Janeway doesn’t remember how the Diviner captured the Protostar. Meanwhile, the kids themselves don’t know much about Starfleet, even though they want to join Starfleet.

In “Chain of Command,” as the temporary captain of the Enterprise, Jellico ended up making great decisions even though he didn’t have all the pieces of the puzzle, and was the person who got the Cardassians to give-up Picard as a prisoner. All of this means Jellico’s track record is similar to his catchphrase — “get it done.” When it comes to unraveling the complicated plot thread of Prodigy, Jellico might not be the hero this Trek series wanted, but he’s certainly the one it needs.