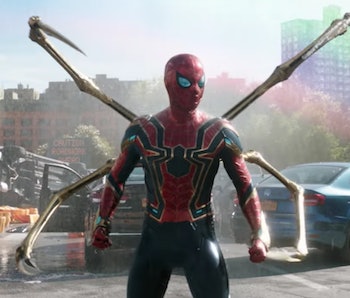 It took a while, but Marvel finally delivered. The first official trailer for Spider-Man: No Way Home (aka, Spider-Man 3) from Sony and Marvel Studios arrived on Monday night, August 23, and it’s packed full of exciting details. (It also confirms that the leaked trailer from Sunday was accurate, but that’s a whole other story.)

We’re about to dive deep into spoilers for the Spider-Man: No Way Home trailer, so if that’s something you care about, watch it first (it’s embedded below) before reading another word about how this movie might potentially set up the plot of Avengers 5 in the Marvel Cinematic Universe.

Let’s quickly talk through the plot of Spider-Man 3 (according to the trailer). After Mysterio reveals Spidey’s true identity, he’s arrested by the police, and his life generally stinks. So Peter Parker goes to Doctor Strange and asks the Sorcerer Supreme to cast a spell to make it so that nobody knows he’s Spider-Man again.

Unsurprisingly, this backfires, apparently because Peter won’t stop interrupting Strange with requests during the spell casting process. As a result (or possibly for unrelated Loki reasons), the multiverse splits open, and a bunch of non-MCU Spider-Man villains shows up in the MCU.

The trailer shows Alfred Molina’s Doc Ock from 2004’s Spider-Man 2, who’s already been confirmed in various reports. We’re also pretty sure Jamie Foxx is returning as Electro, though that’s not in the trailer. However, the biggest surprise may be the return of a certain Green Goblin...

(Oh, and if you’re wondering about Tobey Maguire and Andrew Garfield, I don’t think Marvel or Sony is ready to confirm that just yet.)

Spider-Man 3 and the Green Goblin

Spider-Man’s most iconic villain is Norman Osborn, and nobody plays the role better than Willem Dafoe, who appeared across from Tobey Maguire in the original movie. The actor’s previously deflected questions about whether he appears in No Way Home, and while this trailer doesn’t confirm it, we do see the villain’s unmistakable green grenade. (His laugh is pretty iconic too.)

For a while now, speculation has been swirling that Avengers 5 could explore the Dark Avengers plotline from the comics, in which a group of villains disguised as superheroes takes over the Avengers. The only problem? The story relies heavily on Osborn, who leads the team as the Iron Patriot.

To be fair, one little green grenade is pretty far from an Avengers 5 confirmation, but it’s an important first step. And once Norman Osborn arrives in the MCU, Spider-Man and the remaining Avengers may find that he’s surprisingly hard to get rid of.