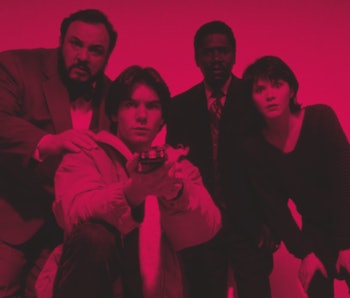 The most criminally underrated science fiction series of the 1990s isn’t Babylon 5 and it isn’t even SeaQuest DSV. Some might argue for the lack of love given to Space Above and Beyond or pretend the X-Files somehow wasn’t a massive hint (it was.) But the show that truly doesn’t get the respect it deserves was the 1995 TV series that dared to go into a parallel dimension every single week.

That show was Sliders. It starred science fiction and fantasy royalty in the forms of Jerry O’Connell and (initially) Jonathan Rhys-Davies. It was co-created by Tracy Tormé, one of the original writers on Star Trek: The Next Generation. And it utterly slapped. Even when Sliders failed hard, it was still imaginative, fun, and unique. Here’s what the show was all about, why it was great and how to stream it for free.

Airing first on Fox and then, much later, on the SyFy Channel (when it was still called the Sci-Fi Channel), Sliders was a series about a group of four people who accidentally start hopping different dimensions. Like Quantum Leap, the titular sliders don’t have control of which dimensions they’ll slide into next, nor do they control how much time they get to spend in each parallel dimension.

This plot device is as efficient as it is ridiculous. Sometimes the gang only has to tough it out in parallel dimensions for like 10-seconds (like the time they go to the all-fire dimension). Sometimes they have to chill for several days. Either way, the set-up of Sliders allowed the show to be both an anthology series and an ongoing story with character arcs. Each episode was basically like a new Black Mirror or a Twilight Zone, but like Doctor Who without the TARDIS.

Sliders is a freaking buffet of both genius and hilariously and over-the-top sci-fi premises. Some of those concepts included:

You get the idea. It’s a gonzo carpet-bombing approach to science fiction in which the most outrageous idea always wins. If Kurt Vonnegut’s fictional sci-fi writer Kilgore Trout worked in TV, he would have been perfect for Sliders.

Which seasons of Sliders are the best?

Ah-ha! You may have sensed that this delicious premise was doomed to be screwed up by simply existing in the 1990s, yes? Well, you’re right! While the first two seasons of Sliders are pretty solid, things start to crack around Season 3.

Initially starring Jerry O'Connell, John Ryhs-Davies, Celvant Derricks, and Sabrina Lloyd, almost none of the original cast save for Derricks would be around for all of Season 5. Starring as Professor Arturo, Rhys-Davies left after Season 3 and was kind of replaced — bizarrely — by Charlie O’Connell (Jerry O’Connell’s real-life brother who played his brother on the show, too).

Today, Jerry O’Connell is kicking around as the voice of Commander Ransom on Star Trek: Lower Decks, and his brother Charlie is probably best-known for being on that one season of The Bachelor. John Ryhs-Davies slid into the best possible universe by landing the role of Gimili in Lord of the Rings, making Sliders his gig in between his Indiana Jones fame and Middle-earth. (Somehow in the middle of all of this, Rhys-Davies also appeared as a holographic Leonardo DaVinci in Star Trek: Voyager in 1997. Lower Decks referenced this with a joke, which is pretty deep cut when you consider the Jerry O’Connell Sliders connection.)

Anyway, if you’re watching Sliders for the first time, and you don’t feel like watching from the very beginning, that’s fine. The entire show is streaming for free on Peacock, so sliding around and reading the various synopsizes will eventually land you on a great (or unintentionally) hilarious episode. But beware of too much Slider-sliding.

Just don’t venture into Season 4. Just don’t do it. Remember how there were two seasons of the X-Files where Mulder and Scully are barely around? Seasons 4 and 5 of Sliders are like that, but slightly more painful. It turns out when you’re doing a show in which the setting changes literally every single episode, having the stability of the regular characters is bizarrely essential. That said, Cleavant Derricks’ as Remebrant Brown is in all five seasons, and he’s pretty damn great. If you feel like watching every single episode of Sliders you may be disappointed in the end, but you’ll never be bored.

Sliders came from an alternate world of TV, a time in the 1990s when it felt like over-the-top science fiction could be entertaining as hell without taking itself too seriously. Sliders isn’t prestige sci-fi TV, and it never wanted to be. At least not in this dimension.

Sliders is streaming for free on Peacock.