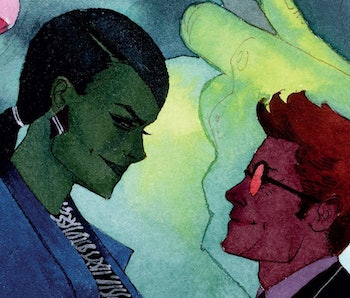 Blink and you’ll miss him. The Devil of Hell’s Kitchen is headed back to the MCU a lot sooner than expected. Daredevil’s cameo in the new She-Hulk: Attorney at Law trailer, unveiled at San Diego Comic-Con this past weekend, is so quick it can only be properly analyzed if you slow it down. Amid a bevy of cameos, fourth-wall-smashes, friendly cousin competition, and much-improved CGI, Matt Murdock (Charlie Cox), makes a sudden appearance in front of She-Hulk (Tatiana Maslany).

We knew we’d see Daredevil rise from the ashes of his celebrated Netflix run eventually, but now we know it’s coming very soon — and with a brand new suit. Here’s what it all means, and why more Matt Murdock matters.

Daredevil’s trailer appearance occurs at the very end, with no dialogue or context. She-Hulk is wearing her recognizable purple and white, skin-tight bodysuit, which has more of a romper cut in the trailer. Meanwhile, Daredevil has a suit with some design elements previously seen in his Netflix series — and some that are new to the screen but recycled from the comics.

The yellow-and-red suit that we get a quick glance at may be “new” for Netflix’s Daredevil viewers, who got accustomed to seeing Charlie Cox in a red suit on the show, but it’s old news for comic fans.

For the first seven issues of Daredevil’s standalone comic book run, which began in the ‘60s, the blind lawyer-turned-vigilante wears the color-blocked costume. After that, Daredevil opts for all-red digs and the occasional all-black outfit. Not much explanation is given as to why writer Stan Lee and inker Bill Everett made the wardrobe change.

Notably, the mustard-and-maroon suit isn’t featured in Daredevil’s 1986 Born Again arc, which will presumably serve as the creative foundation of Disney+’s Daredevil: Born Again series. It’s a dark tale about Daredevil’s descent into destitution and despair, plunging him into depression and eventually suicidal ideation before the superhero “resurrects.”

What Daredevil’s inclusion in She-Hulk means

Daredevil’s role in She-Hulk: Attorney at Law does make sense, even if the tone of the two characters couldn’t be more mismatched.

The two are Marvel’s most famous lawyers, and they’ve been pitted against each other before. In fact, a heated courtroom battle in the comics between Jennifer Walters and Matt Murdock involved an elderly Steve Rogers. She-Hulk defended Captain America while Daredevil served as prosecutor on a case that threatened to destroy Cap’s reputation. Both lawyers came well prepared, and the ordeal ended with the super-attorneys finding a new respect for one another.

Though She-Hulk does handle some cases that deal with sensitive subjects like homicide and sexual assault, her own comics have always stood out for two reasons: She-Hulk’s tenacious commitment to breaking the fourth wall, and the inherent farcicalness of a green giantess whose appetites grow larger when she hulks out while working as a lawyer.

While She-Hulk is tough, her stories gleefully embrace the silly and strange, hence Marvel Studios boss Kevin Feige’s insistence that She-Hulk: Attorney at Law will be the MCU’s first official sitcom. Daredevil’s comics, however, are not so light-hearted. Daredevil’s Netflix series, while only loosely based on the comics, stayed faithful to its source material’s overall grittiness.

Given how successful Daredevil’s run was on Netflix with audiences and critics alike, it seems unlikely that Marvel Studios will make the MCU’s Daredevil more light-hearted to fit the PG-13ness of most of its existing and future projects. So how does Daredevil’s camo in She-Hulk: Attorney at Law work, let alone on a level that moves the MCU forward?

Daredevil’s cameo could function to introduce Jennifer Walters to Kingpin (Vincent D’Onofrio), thereby heightening the stakes of the sitcom with a truly nefarious A-list villain. It may also serve as a way to begin integrating Marvel’s other street-level heroes and antiheroes, including Jessica Jones, Luke Cage, Elektra, and Punisher, all of whom may have roles in Born Again or Thunderbolts.

Daredevil’s cameo in She-Hulk could also aid viewers in establishing a concrete place in the MCU’s increasingly convoluted multiversal timeline for She-Hulk and Daredevil: Born Again. When do both of these shows take place — before or after Avengers: Endgame? And if Marvel Studios is going in the multiverse direction, what universe do they take place in? We won’t have to wait long to find out.