“It was important that she held some sort of secret.” 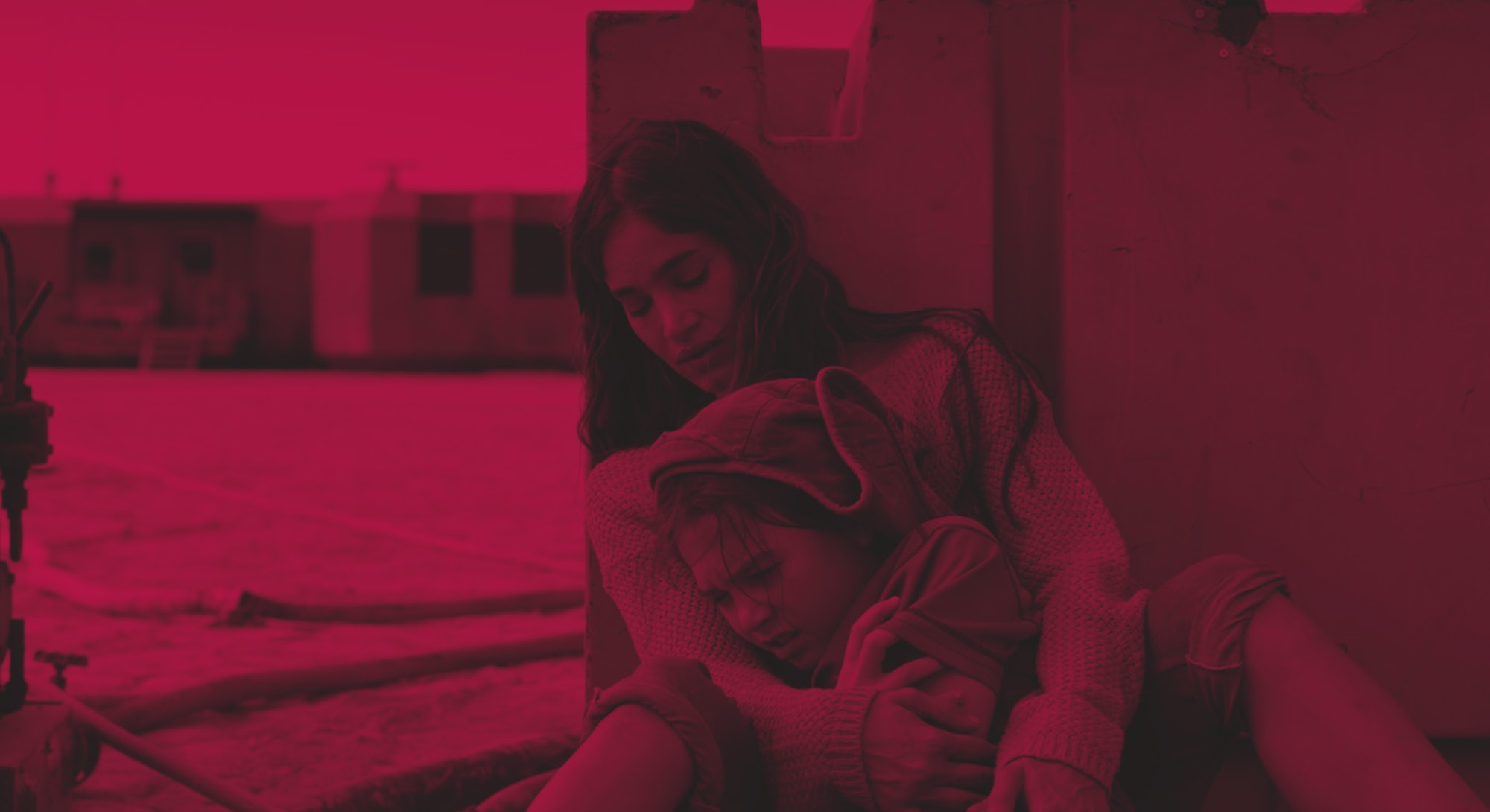 How can you bring depth to a character who keeps everything close to the chest?

Best known for her roles in action films like The Mummy, Kingsman: The Secret Service, and Atomic Blonde, as well as Gaspar Noé’s experimental Climax, Boutella is working in a more subtle, dramatic key in Settlers. When her character, Ilsa, takes center stage in the film’s second act, Boutella delivers a performance so richly internal that you question how her intentions and allegiances are shifting. It’s a creative decision that makes Ilsa hard to read, especially given how Rockefeller slowly teases out his story. For Boutella, playing Ilsa meant learning to admire the strength in her choices — even those that appear to put her young daughter Remmy (The Florida Project’s Brooklynn Prince) at risk.

“You can see in the choices Ilsa makes how much she loves Remmy,” Boutella tells Inverse. “Even if she can’t communicate that at the moment, Ilsa knows her daughter will ultimately understand why she did what she did.”

Boutella didn’t struggle to portray Ilsa’s sense of isolation. The film is set on Mars, and to convincingly visualize that setting, the Settlers cast and crew shot the film in a desert on the Northern Cape of South Africa. According to Boutella, this environment made it easy for her to believe she was living on another planet.

“The light in South Africa is completely different, and so is the sky and ground,” says the actress. “It felt like we were on Mars at times because it was so different. We got to see some of the most insane sunsets, with incredible colors that we’re not used to seeing in a city. I’ve never seen skies that way, which made it all feel very otherworldly.”

Below, Boutella told Inverse about the process of making Settlers, its surprising twists, and the film she’d take with her on a trip to Mars.

Ilsa’s a mystery in this film. What was it like to collaborate with Wyatt Rockefeller on building this character?

It was important that she held some sort of secret. You get a hint of it at the beginning, when they’re all on the bed and Remmy is asking her about Earth, that Ilsa is holding back from telling Remmy about how beautiful things were.

Ilsa really had some big hopes about going to Mars, even though there was a part of her that always worried about what their future might be if they left Earth. So, Ilsa is withholding the chaotic state Earth was left in from Remmy. Even though it’s never shown in the film itself, you do have to wonder what pushes a family to leave a place as beautiful as what we have here.

“There’s all this research and money being put into going to Mars and finding another home. These are things that are very present in our lives right now.”

Considering everything we’re facing now, ecologically speaking, are we headed for a fate where we’re going to have to consider leaving the planet? There’s all this research and money being put into going to Mars and finding another home. These are things that are very present in our lives right now. That’s what Ilsa’s holding deep inside. Wyatt was fantastic to work with because he understood her emotional and moral depth.

While she’s very loving and cares deeply about her husband and daughter, Ilsa’s also capable of violence.

She was originally written slightly colder than she is in the film. That’s a discussion I had with Wyatt early on, because sometimes when you’re a parent — and it’s something I’ve experienced with my mother — you hold so much responsibility and concern for a family member that you don’t necessarily come across as very caring or loving.

“It’s the toughness that she’s had to embrace to survive her environment, and I think that whether she realizes it or not, that’s how she is with Remmy.”

Wyatt and I were able to come up with certain moments of tenderness between Remmy and Ilsa, while never taking away from the fact that Ilsa is very hard on her. It’s the toughness that she’s had to embrace to survive her environment. And whether she realizes it or not, that’s how she is with Remmy. There was even a deleted scene where she was much harsher on Remmy than she is at any other time in the film.

What makes the ending so rewarding is we get to see Ilsa’s grown-up daughter face the exact same thing that she did and handle it in a similarly introverted, protective way. I love the similarities you see between my character and the older Remmy.

Especially in the film’s second act, named after Ilsa, your performance is very introverted. We don’t know what Ilsa is thinking or planning.

She’s saying no to the patriarchy in the second act. She is basically doing the thing that you least expect her to, considering the conditions she and Remmy are in. What I think is beautiful about the film is that you see her refusing to give up. In fact, if she had stayed and become content in those conditions, that would have been her way of giving up.

On the other hand, Jerry, [played by Ismael Cruz Córdova,] has given up when we meet him. He’s come back from the war and believes that there’s nothing else. But Remmy hasn’t seen what he’s seen and wants to discover it for herself. That’s what makes her brave. The moment that someone goes blindly into something, because they have hope, is when things can change for them.

Shifting focus a little, I wanted to talk about the film’s set. It feels very lived-in. Are there any secret keepsakes of Ilsa’s hidden throughout it?

The family does live in a minimal way, but you’re right that they have some things. Remmy has toys that she plays with all year round — and probably has since she was two years old. In one scene, I’m talking to Ismael’s character and playing with the dolls Ilsa has been making for Remmy, made out of wires. Those are often in the background in Remmy’s room, and I like how they show the ways that the family has gotten used to making things out of practically nothing.

Even the clothes we wear throughout the film are all recycled and old, like they were brought by the people who originally came to the settlement. All that was done in a way that I thought was quite clever. As you said, it’s a space that feels quite lived-in.

“It was a very calm and quiet environment — like it would be if we lived on Mars and there was nothing around.”

Everything was practical. It was all there and built exactly how you see it in the movie, which was quite helpful for us actors. We were very isolated at the border of Namibia in South Africa, and it was a very calm and quiet environment — like it would be if we lived on Mars and there was nothing around.

Can you talk about what it was like working with Brooklynn Prince?

We spent a lot of time together. We lived in little huts in this gorgeous place in South Africa near the border of Namibia, and we would have tea every day. We would cook for each other and have breakfast together.

“I’m really excited for her moving forward because she has so much in her heart and in her head.”

She’s such a sweet girl, and she’s very much a kid. But at the same time, she’s very mature and aware of her environment, and the circumstances of the character. Talking about that with her was fascinating because she has such a good head on her shoulders, and she’s very aware of the emotional context and backdrop of the film. She understood the power dynamic between men and women that the film explores. We talked about Remmy’s curiosity about Earth and Ilsa’s desire to shield her from the reality of it.

She’s so incredibly mature and very talented. I loved working with her, and I adore her as a person. I’m really excited for her moving forward because she has so much in her heart and in her head.

Are there any common differences you’ve noticed between working with veteran directors versus up-and-coming ones like Wyatt Rockefeller?

There are differences depending on whether you’re working on a studio or independent film. There is a difference in the pace and rhythm on set, which is exciting one way or another. I don’t think that, personally, one is better than the other. I appreciate both, and every time I leave one environment to enter another, it’s always an uplifting and challenging experience.

I love watching very small indie movies and arthouse films as an audience member, so as an actress I love being a part of them, but the same goes for bigger features. It’s exciting to get to be a part of the scope and scale of those. Every story is different and keeps you on your toes. I find the process very rich and exciting.

If you were going to Mars and could only bring one film from Earth with you, what would it be?

Oh my God. Woah. It needs to be a movie that has it all, huh? It wouldn’t be a horror movie, even though I like them. I don’t think it’d be a superhero movie. Oh my God, what would it be? [Long pause] I love Wings of Desire. It’s one of my favorite films. I would take that just because it’s the one that always sits in my heart the longest.

Yeah, I think it would be good. Or Paris, Texas? I love that film. I love Wim Wenders. That’s a film that would work for me because, if it’s something that’s overly active or very loud, I don’t think I could deal with it for that long. It would need to be something that’s quite calm and poetic and puts me in a peaceful place. Otherwise, I’d probably take a documentary... like Planet Earth [Laughs]. That’s what I should take! To remind me of Earth, I guess.

Settlers will be released in theaters and on VOD Friday, July 23.