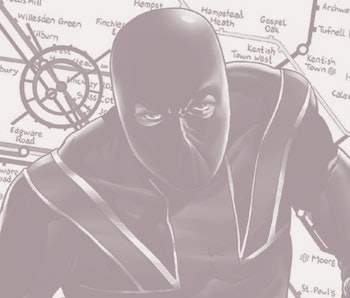 Few of Marvel’s upcoming Disney+ shows hold quite as much promise as Secret Invasion.

The highly anticipated series will bring several of the Marvel Cinematic Universe’s established heroes, including Nick Fury (Samuel L. Jackson) and Talos (Ben Mendelsohn), together in a story inspired by the Secret Invasion comic crossover. That iconic event saw humanity come into conflict with the Skrulls after discovering that members of the shapeshifting alien species had begun to secretly pose as some of Earth’s most powerful figures.

As of now, it’s unclear what kind of a lasting impact Secret Invasion will have on the MCU, but the series is set to introduce a number of new characters. In fact, if one new leak is to be believed, Secret Invasion is actually going to introduce one notable British comic book hero into the MCU.

Introducing Union Jack — The Illuminerdi claims that Olivia Colman is going to play a gender-swapped version of Union Jack in Secret Invasion. The outlet also reports that Colman’s mysterious character will be known as “Falsworth” in the long-awaited Disney+ series although, as is always the case with Marvel leaks, nothing is confirmed until we actually see it.

In the comics, the Union Jack mantle has been assumed by several different characters over the years. James Montgomery Falsworth was the first man to assume the disguise, but the identity was later taken on by his son, Brian Falsworth, as well as his grandson, Kenneth Crichton. Joseph Chapman, a close friend of Crichton’s, is the most recent man to become Union Jack.

The original Union Jack is also the father of Jacqueline Falsworth, who in the comics becomes Spitfire. In the MCU, James has already appeared as a member of Captain America’s special World War II unit, the Howling Commandos. It therefore seems fair to assume that Colman’s Falsworth will be a relative of the veteran.

A New Kind of Leader — The Illuminerdi doesn’t offer any specific details about Colman’s Secret Invasion character, which makes it impossible to deduce which version of Union Jack she may be playing. That said, Joseph Chapman does fight against the Skrulls in the comic book version of Secret Invasion, so it’s possible Colman’s character was inspired by the Chapman iteration of Union Jack.

Even if that’s true, it’s still difficult to predict what role Colman might serve in Secret Invasion. Early details about the series have suggested she’ll be an ally to Samuel L. Jackson’s Nick Fury, which adds some further credence to the claim that she’ll be playing a version of Union Jack. Notably, Murphy’s Multiverse reported last year that Colman will portray a “mysterious spy” with a “commanding ‘Fury-esque’ presence” in Secret Invasion.

The outlet also claimed that Colman’s character is “a bit of a puppeteer who does and has done a lot of her dirty work behind the scenes.” Marvel is also said to be interested in bringing Colman back for multiple MCU projects after Secret Invasion.

With all this in mind, it’s possible that Colman’s character will turn out to be a retired version of Union Jack, one who, like Nick Fury, has stepped away from active spy duty in favor of taking on a behind-the-scenes spymaster role. If that’s the case, it seems likely that Colman will eventually emerge as a new, Nick Fury-esque figure in the MCU.

The Inverse Analysis — Introducing a character like Union Jack would give Marvel the chance to invest further in some of the MCU’s non-U.S. locations. Recent MCU titles like Moon Knight and Eternals have already done a lot in that regard by taking place primarily in cities like London and Cairo, but bringing in a character who’s so closely tied to the U.K. would do a lot to bolster Marvel’s ongoing expansion efforts.

If Colman does end up playing a version of Union Jack, that also opens the door for Marvel to eventually assemble one of its British comic book teams — like MI13, the Knights of Pendragon, or the Hellfire Club — in the MCU. That’s a legitimately exciting possibility, and it’s difficult to imagine an actor better suited to lead a British superhero team than Olivia Colman.

Unfortunately, we likely won’t know whether Colman is actually playing a new version of Union Jack until Secret Invasion premieres on Disney+ next year.

Secret Invasion will premiere on Disney+ in Spring 2023.