“What if we’re the dark version?” 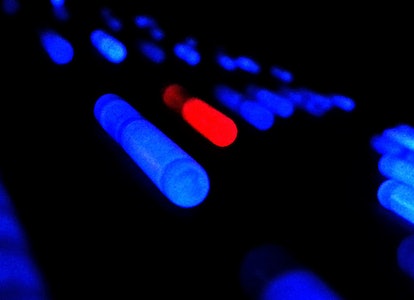 You don’t need a budget to create a great work of science fiction.

In fact, shooting on a shoestring budget has fueled the ingenuity of many promising genre directors. Especially in recent years, streaming services have left at-home audiences hungry for smart, tightly plotted sci-fi narratives and offered new avenues for indie filmmakers to get such movies made and seen.

Armed only with pocket change, a committed cast, and the combined power of their imaginations, the sky’s the limit for what talented storytellers can accomplish. This is particularly true in the science-fiction space, where a character’s psychology is often studied in tandem with inexplicable phenomena that radically transform their view of the world.

Coherence, a startlingly assured debut by writer-director James Ward Byrkit, fits perfectly into this realm of low-cost, high-concept sci-fi. It first hit theaters in 2013 with reliable space-oddity exhibitors Oscilloscope Laboratories handling distribution. Yet, the film earned only a small, loyal following. (Indeed, Byrkit is only now bringing to life his next project — Shatter Belt, described as an anthology series that revolves around consciousness — via Kickstarter.)

Now that Coherence is streaming, here’s why you need to make time for one of the past decade’s most impressive sci-fi puzzles.

At Coherence’s center are eight friends who gather under one roof for a dinner party on the night of an astronomical anomaly: “Miller’s comet,” as it’s known, will be passing closer to Earth than usual. But no one’s spending the evening looking up.

Em (Emily Baldoni) is busy navigating tensions in her relationship with Kevin (Maury Sterling), who’s asked her to join him on a lengthy business trip to Vietnam. Elsewhere, hosts Mike (Nicholas Brendon, of Buffy the Vampire Slayer fame) and Lee (Lorene Scafaria, now better known as the writer-director of Hustlers) have issues of their own, which stem mostly from Mike’s drinking problem and (rather amusing) resentment related to an acting gig he once had on Roswell.

The partygoers are all generally dismayed by the arrival of Laurie (Lauren Maher), Kevin’s flirtatious ex-girlfriend, who’s since shacked up with their friend Amir (Alex Manugian) but keeps antagonizing Em. This naturally doesn’t sit well with Em’s friend Beth (Elizabeth Gracen), who won’t stop offering everyone ketamine for some reason, nor Beth’s hot-tempered husband Hugh (Hugo Armstrong), who’s about at his wit’s end with Beth going on about the house’s bad energy caused by a “door to nowhere.”

After the power goes out, along with the connectivity on all their mobile devices, these friends are rattled by the sight of another house still lit up down the street. Investigating, two of the partygoers return with a mysterious box, which contains a ping-pong paddle and Polaroids of all the guests, marked with unexplained numbers.

They tell everyone what they saw in the neighboring house — a gathering of friends who looked impossibly familiar — but none of the others believe them. Walking outside into a night that feels somehow darker and more sinister than before, Em encounters Kevin. He’s not acting like himself.

To say much more about Coherence runs the risk of spoiling its many thrilling twists and turns, but suffice to say that the film impresses most as what you might call a “gearshift” picture, starting out as one kind of story before phasing into something else entirely. In this way and a few others, it recalls Karyn Kusama’s razor-sharp The Invitation, set around another ill-fated dinner party, though its more direct ancestor is Shane Carruth’s Primer, a labyrinthine indie about two engineers who accidentally build a time machine in their garage.

Like Primer, Coherence might lead non-theoretical physicists in the audience to tear their hair out in frustration, or at least to reach for a notepad and pencil to begin straightening out all the film’s coiled quantum mechanics into something more easily decipherable.

And yet Byrkit opts for a highly naturalistic approach, operating a handheld camera and often blurring focus to convey shifts in his characters’ increasingly unmoored headspaces, which grounds Coherence in uncanny realism. The film’s web of doppelgangers, parallel universes, and reality-bending paranoia grows more tangled by the minute, but the actions and motivations of Coherence’s characters never feel less than unerringly honest.

Here is a film that fully takes advantage of its cerebral premise, asking not only what would happen if the lines between our universe and the next became blurry but what a group of flawed, unhappy individuals might do in such a circumstance. Faced with identical versions of ourselves who seem happier, better-adjusted, and perhaps even wealthier, would we avoid interacting with them? Would we grow to resent them, even harbor lethal intent towards them? How would we reconcile the ways in which the paths of their lives have deviated from our own?

Coherence clicks more fully into place when one learns the film didn’t have a screenplay, with Byrkit instead shooting over five consecutive nights and handing out cards to each actor, which explained what stories they needed to work into their scenes and what their characters wanted to achieve. It’s a testament to the chemistry and charisma of his leads that Coherence lingers so viscerally in the mind, and that so many of its improvised exchanges are memorable. (When the concept of Schrödinger’s cat comes up, one of the characters quips “I’m allergic.”)

Driving Coherence through its boldly thought-provoking, brain-teasing plot is Byrkit’s assured hand as a writer-director, and the eerie atmosphere he manages to create through his own camerawork, Lance Pereira’s spotless editing, and the use of Kristin Ohrn Dyrud’s chilling score — a series of disembodied drones that gets under your skin.

In its glimmering, nocturnal ambiance and mounting dread, Coherence most resembles an extended Twilight Zone episode. (One of that show’s classic installments, “The Monsters Are Due on Maple Street,” even opens with a power outage and an unidentified object soaring overhead.)

But the film’s ultimate direction also grounds Coherence in the rich existential crises of its characters. It allows their flawed, conflicted thinking to drive us toward a final resolution, one that perfectly underscores Byrkit’s perspective on fate, free will, and self-perception. Coherence cares about its characters and feels their pain deeply. It’s that rare head-spinner outfitted with a soul — and all the more haunting for it.