“Animals don’t trap something and then just let it go.” 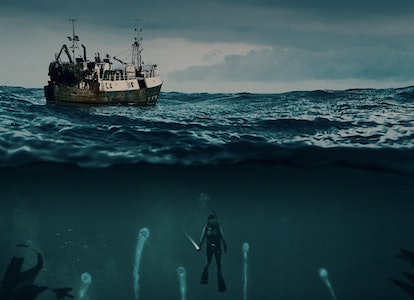 When grad student Siobhan (Hermione Corfield) takes off her wool cap and reveals her striking red hair early in director Neasa Hardiman’s Sea Fever, the crew of the fishing boat on which she’s hitched a ride is scandalized. Red hair is considered bad luck among fishermen, but Siobhan, a scientist who studies aquatic animal behavior, doesn’t believe in those myths.

“I can’t change what I am,” she tells them, and there are other, more practical concerns for the crew. “We’ve already spent her fee,” says co-captain Freya (Connie Nielsen), and that’s the end of the discussion.

Siobhan is on the boat to gather data for her graduate thesis, although she’s far more comfortable in a controlled lab setting. These rough, boisterous seafarers make her uneasy, and they view her as an interloper, a necessary compromise to help bolster a fishing operation that’s barely staying afloat financially. She’s their curse and, eventually, their savior in Hardiman’s relentlessly unsettling sci-fi horror film.

Derivative in all the best ways. Sea Fever pulls from sci-fi horror classics like Alien and The Thing, but it’s not just ripping off Ridley Scott and John Carpenter. Hardiman establishes a unique mood and tone for the story while calling back to familiar genre touchstones.

On its way to a planned fishing spot, the boat gets caught by an unknown force, holding it in place and leaking some kind of substance into the hull. “Something’s changing the texture of the wood,” the crew’s engineer, Omid (Ardalan Esmaili), tells Siobhan as she pokes at the substance with a pencil (not unlike Tom Skerritt’s Dallas using a pen to investigate unknown goop in Alien).

Siobhan immediately shifts into scientific analysis mode, first speculating that the boat could be covered in a new kind of barnacle before diving underwater and witnessing a spectacular, vast creature with dozens of tentacles that have grabbed hold of the vessel.

Sea Fever is a relatively small-scale production, but Hardiman makes excellent use of the resources at hand, and every glimpse of the creature conveys its awe-inspiring scale and otherworldliness. The movie balances that sense of overwhelming danger with a more insidious threat inside the boat, once the creature suddenly and inexplicably releases them.

“Animals don’t trap something and then just let it go,” Siobhan warns the crew, but they’d rather remain in blissful ignorance, even stopping to haul in a catch rather than speeding back to shore as soon as possible.

The creature hasn’t just relinquished them freely, though. Hardiman again echoes Alien in an upbeat dinner scene following the crew’s apparent narrow escape. Everyone is laughing and joking until one crew member suddenly starts acting strangely, and he soon suffers a gruesome fate. The creature has left tiny larvae behind, and they propagate in the water system and inside the crew members themselves, turning Sea Fever into a sort of closed-door mystery in which everyone is a potential carrier of disease.

Later, in one of the movie’s tensest scenes, Siobhan tests each remaining crew member for hidden signs of infection, a clear nod to The Thing’s unforgettable testing scene.

There’s some uncomfortable resonance in the argument between Siobhan and the rest of the crew as she insists they quarantine themselves before returning to shore to ensure that they don’t spread this deadly infection to the general population. Siobhan starts Sea Fever as a dispassionate, calculating scientist who insists, “I don’t do joining in,” but her deep understanding of animal behavior patterns also makes her the most intuitive person on the boat, with a willingness to make sacrifices for the greater good.

Ultimately, Siobhan finds reserves of inner strength and steps up as a leader, but her character arc isn’t heavy-handed or triumphant. It’s the quiet evolution of a competent, compassionate person, and it’s easy to see echoes of Alien’s Ellen Ripley or The Thing’s R.J. MacReady in Siobhan, and in Corfield’s effortlessly powerful performance. The looming monster and its microscopic invading spawn are scary, but what’s just as scary is the human factor, the way nerves can fray in a confined space with no possibility of escape, and people who once trusted each other can turn hostile so quickly.

In the middle of that chaos, Siobhan remains both rational and understanding, even extending her sympathy to the creature itself, which is only following its nature. Just like Siobhan, it can’t change what it is.

Sea Fever is streaming now for free on Hoopla and Kanopy, and is also available on Hulu in the U.S.