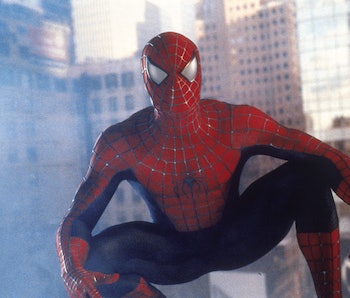 It’s already been one year since Spider-Man: No Way Home brought fans some closure to Sam Raimi’s original Spider-Man trilogy, which starred Tobey Maguire in the lead role. But now, glimpses of what would have been Spider-Man 4 are flying across people’s news feeds.

It began on November 27, when comics illustrator Ken Penders posted on Twitter a behind the scenes photo of early work on Spider-Man 4. At the time, Oscar-winner John Malkovich was signed to play Adrian Toomes, and the costume department was already at work crafting his wings even though the script wasn’t finished. “Once production shut down, all materials were turned in. I've sat on this for almost 15 years,” Penders tweeted.

It doesn’t end there. The next day on November 28, /Film published an interview with storyboard artist Jeff Henderson, who revealed one of many different plot synopses planned for Spider-Man 4. In at least one version, the movie would have introduced a new character, a nameless female executive who takes over the fictional The Daily Bugle newspaper and turn it into a TMZ-like gossip magazine.

The kicker is that this character would be unmasked as the Vulture’s daughter, who takes up her father’s mantle to defeat Spider-Man.

“The Daily Bugle was going to get bought out by a huge multinational conglomerate, kind of like a Daily News or a TMZ,” Henderson told /Film, “They wanted to turn the Daily Bugle into a gossip rag. And for all of JJJ's faults, he was still a newsman. He's still old school like Walter Cronkite, 'News is news, this is bulls***,' that kind of thing.”

Henderson personally liked the story, “because you have that conflict between the modern and social media sensibility about news versus the old school version.”

Had Spider-Man 4 pursued this story, the movie would have Spider-Man defeat the Vulture in the first half of the movie, who leaves his gadgets and mechanical wings to his daughter to take over as “Vulturess.” The non-fiction book With Great Power: How Spider-Man Conquered Hollywood During the Golden Age of Comic Book Blockbusters by Sean O’Connell reported from O’Connell’s own sources that A-lister Angelina Jolie was circling the role.

“The reveal was that the female executive who's in charge of the buyout, who's overseeing the company that's taken over The Bugle, ends up being [Vulture's] daughter,” Henderson said. “So they're covering all this stuff going on with the Vulture and then she comes to believe that Spider-Man killed him. Then she discovers [Vulture's] tech and reconnects. Again, it was a really cool way in and it touched on a lot of really cool thematic stuff going on at the time, which, especially how it's played out since, was a lot more on the nose than I think we knew at the time.”

The Marvel Cinematic Universe’s own Spider-Man trilogy was handled by a different creative team, but a semblance of this twist still ended up on the big screen. In the 2017 film Spider-Man: Homecoming, Tom Holland’s Peter Parker brings his crush, Liz (Laura Harrier) to their school’s homecoming dance. At her doorstep, he nervously learns her father is none other than Adrian Toomes (Michael Keaton).

Although Raimi is pretty open to the idea of making his fourth Spider-Man, the ongoing success of the MCU’s Spider-Man and Sony’s inexplicably popular Venom and Morbius (however ironic that popularity is) means it’s unlikely that Raimi’s universe can spin a new web any time soon. But with the imminent collapse of the Marvel multiverse, maybe there’s still some way that Tobey Maguire’s iconic webslinger can swing through with one more movie, and one more battle with the Vulture.