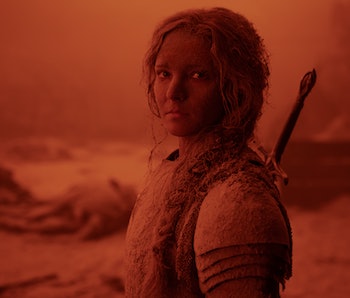 Sauron is still in hiding when The Lord of the Rings: The Rings of Power begins, but that doesn’t mean his presence won’t be felt in the Amazon series’ first season. The upcoming series is set to begin in a time when J.R.R. Tolkien’s most manipulative villain is still inhabiting the lands of Middle-earth in secret, following the defeat of his former master, Morgoth, at the end of the First Age.

However, while Sauron’s role in The Rings of Power Season 1 is being kept under tight wraps for the time being, the show’s creative team has made it clear that the villain will never be too disconnected from the events of the series. As a matter of fact, the first official clip from The Rings of Power spotlights an ominous moment when two of the series’ heroes find themselves in a place marred by his presence.

More importantly, the series’ first official clip confirms a detail about The Rings of Power’s take on Sauron that should come as a welcome update to Tolkien fans.

A first look at Sauron’s effect in ‘Rings of Power.’

A Marked Stone — The Rings of Power scene in question, which premiered on The Late Show with Stephen Colbert earlier this week, follows Galadriel (Morfydd Clark) and one of her Elven compatriots (played by Fabian McCallum) as they explore a desolate, frost-covered chamber. After inspecting the body of an orc that has been embedded into one of the chamber’s walls, Galadriel notices a snowflake descend to land on a nearby stone slab, only to immediately and unnaturally melt upon contact.

The water she subsequently pours on the stone evaporates, revealing a mark that has been scorched into its surface. “Even stone cannot hide the mark of one whose very hand is flame unquenched,” Galadriel observes, before seeing a vision of the mark burning vibrantly red. Taken aback, Galadriel says: “He was here. Sauron was here.”

The clip ends shortly thereafter, offering fans just a taste of the ominous mood that will no doubt be present throughout the entirety of The Rings of Power. While the scene doesn’t reveal too many new details about the series, it does subtly set up an epic yet tragic moment that takes place near the end of the Second Age of Middle-earth.

Flame Unquenched — Sauron does not have much of a physical presence in the Peter Jackson’s Lord of the Rings and Hobbit films. In fact, the only time viewers really get to see Sauron in his physical form in those films is at the very beginning, during the opening prologue of The Fellowship of the Ring. It’s for this reason that The Rings of Power has the potential to totally redefine the way many casual Lord of the Rings viewers think about Middle-earth’s second Dark Lord.

The series will not only have the opportunity to follow Sauron during a period when he can still take physical form, but as the above clip reveals, it could also showcase the effect Sauron has on those around him. In specific, Sauron’s body is said to be so immensely hot that he’s capable of burning others with a mere touch.

That detail comes into play during the final battle that is waged against Sauron near the end of the Second Age. Indeed, without spoiling too much, one of the greatest heroes in The Rings of Power actually ends up experiencing first-hand the scalding pain that can come when someone finds themselves standing too close to Sauron.

The Inverse Analysis — Much has yet to be revealed about The Rings of Power’s version of Sauron, including who is playing him. That said, by revealing that the villain’s flesh will be like “flame unquenched” in the series, the new clip from The Lord of the Rings: The Rings of Power hints that its take on Sauron may end up being even more faithful to Tolkien’s vision of him than fans had previously assumed.

In case that wasn’t exciting enough, the inclusion of this small Sauron detail also sets the stage for an epic confrontation that may not unfold until the final season of The Rings of Power.

The Lord of the Rings: The Rings of Power premieres Friday, September 2 on Prime Video.