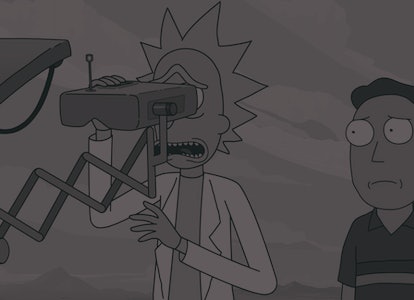 There’s no way to know exactly when Rick and Morty Season 5 might finally grace our eyeholes, but series co-creator and lead voice actor Justin Roiland continues to espouse a radical new idea for rolling out future episodes of the beloved sci-fi animated series.

Not only would it fix a major problem Rick and Morty by lessening how long we have to wait for new episodes, but it’s also an unprecedented idea that could revolutionize how people watch TV in general. All it takes is for a groundbreaking show like Rick and Morty to do something weird, new, and original. Maybe even as soon as Season 5?

In a May 2020 interview with Slashfilm, Roiland discussed how Season 4 had been split into two parts, with the first half airing in late 2019 and the rest in mid-2020. When it comes to Season 5, he had a novel idea: Adult Swim should “drop an episode each month” to “make it a big event.” That way, “the show is alive the whole year” rather than totally off the air for long stretches of time — with the longest gap between Rick and Morty seasons lasting for over two years.

Now, in an interview for Solar Opposites Season 2 (out on Hulu March 26), Roiland says he still endorses his own idea for monthly new episodes of Rick and Morty.

“I can see making episodes like events,” Roiland tells Inverse. “As long as you do enough on-network marketing leading up to the drop, I don’t see it being a problem in this today and age when everybody streams anyway.”

It’s been roughly 10 months since the Rick and Mort Season 4 finale aired. Despite Roiland’s claims in that same Slashfilm interview that Season 5 was “mostly in the can” back in May 2020, we haven’t heard anything about the new season yet. Rather than inch towards a longer delay in-between seasons, Adult Swim could begin airing episodes on a monthly basis soon. Surely most of the season is already done, and in the months it would take to reach later episodes, those would be finished as well. Heck, a writer on the show even joked in February 2021 that they’d started work on Season 7. So what gives?

In theory, a monthly release schedule would make it so that episodes could air without any further breaks whatsoever, especially since we’ve yet to see 60 out of the 70 episodes that were ordered back in May 2018.

“It’s totally up to the network, and I don’t think they would ever go for it,” Roiland tells Inverse. “It’s something that I’ve seen work in the past with Gravity Falls. I think that was a byproduct of the way that production was going.”

In an August 2013 Reddit AMA, Gravity Falls creator Alex Hirsch spoke candidly about how his specific vision for the show led to episodes being delayed for months at a time. Disney ultimately decided to hold certain episodes to maximize potential viewers. Several times in Season 1, the show was off the air for weeks or months at a time.

Roiland’s alternative, however, would be less erratic. And it’s exactly the kind of stunt that Rick and Morty is already known for.

Recall that Rick and Morty Season 3 premiered as part of a ridiculous April Fools’ Day prank in 2017. With no previous advertisement at all, the episode began airing on a loop from 8 p.m. to midnight. Later that year, The Wrap reported this genius move was the work of Adult Swim Executive Vice President and Creative Director Mike Lazzo. But after Lazzo retired in December 2019, his bold approach to programming at Adult Swim may have left with him.

“It would be kind of a Lazzo, crazy outside-the-box ‘Let’s give it a shot!’ kind of thing to do this,” Roiland says. “But Lazzo’s gone now.” An ominous way to explain that as enticing as this monthly schedule may look, it’s a longshot.

Even if Roiland himself doesn’t see it as a possibility, it’s exactly the kind of bold, unprecedented move that has made Adult Swim so unique compared to other networks. And it’s better than the alternative: waiting another full year for any new episodes at all.