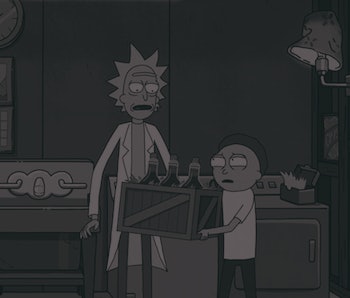 The way Rick Sanchez frets about getting the house in order for a dinner party with his nemesis Mr. Nimbus in the Rick and Morty Season 5 premiere, you’d think he was a high schooler waiting for his crush — not the multiverse’s most brilliant alcoholic. And to top it all off, Morty winds up murdering perhaps thousands of aliens across the eons.

It’s a curious kind of upheaval. Warning! Spoilers ahead.

Early in the episode, Rick opens a portal to another dimension where time moves faster so he can rapidly age some cheap wine to impress his rival, Mr. Nimbus. It feels like a throwaway sci-fi joke with a clever Narnia reference, but it winds up being one of Rick and Morty’s best sci-fi subplots in a very long time.

Rick tosses some cheap wine in this humble Medieval fantasy world where a hooved bipedal alien named Hoovy lives with his wife. This is nothing special for a mad scientist who built an entire microverse to power his car, but after Hoovy offers to help Morty carry the wine back through the portal, he returns home to find that decades have passed.

Hoovy’s pregnant wife is long dead, and his adult son murders him without remorse. Hoovy’s story is over, but Rick and Morty’s problems are just getting started.

Hoovy’s ancestors build an entire civilization around the gateway through which Morty would visit, proceeding through the centuries and millennia into various stages of society — all the way up to a cyberpunk dystopia.

The nuanced depth we get from this alien society is perhaps even better than the snake planet from Season 4 or the cat people from the Purge episode. Doubt grows in subsequent generations, but Morty’s inevitable reappearance rekindles their faith each time, especially when he returns to murder tons of them.

In one era, a nonbelieving prince is seduced by a Jafar-like necromancer who manipulates the prince into killing the king, only for the usurper to kill the prince. Then Morty shows up and kills everyone. The entire thing happens in 90 seconds, but it leaves a big impact.

“Sometimes you gotta be an asshole! My grandpa taught me that!”

This Rick and Morty subplot echoes the show’s bigger message. In the grandest scope of the multiverse across time and space, how much something matters is totally relative. Is there a lot of meaning packed into those 90 seconds or is it a meaningless blip in the grand scope of things?

The grand answer of Rick and Morty has always been a resounding “both.” So you might as well come watch TV.

It’s unnerving to see Morty go full-on Rick mode and murder people to blow off some steam while retrieving some wine he can drink with Jessica, yet the awesome spectacle is what we get here. One of the episode's best laughs comes when Morty yells, “Sometimes you gotta be an asshole! My grandpa taught me that!”

An eternity in every moment

Some of the best time travel stories in recent memory use this same trick or relativity. There’s Peter Capaldi’s “Heaven Sent” episode of Doctor Who, where The Doctor sacrifices himself countless times to break out of a time loop. Christopher Nolan’s Interstellar also uses time dilation to confuse the audience and increase the stakes of his sci-fi epic.

What sort of perspective would we gain by enduring for an entire lifetime, or even many lifetimes? That’s a question this episode asks when Jessica winds up captures and trapped in a crystal for thousands of years in Hoovy’s reality.

“Time without purpose is a prison,” she says. “I have glimpsed into the mind of eternity.”

Jessica earns the following revelation from her transcendent perspective: She and Morty should just be friends. ¯\_(ツ)_/¯

In theory, Jessica will never be the same. Morty, in turn, should at long last give up on his crush. If Rick and Morty can commit to evolving all of these characters to do something different, the Season 5 premiere will be worth it. But if the Season 6 premiere is all about Jessica yet again, what’s the point of rehashing all the same threads?

Otherwise, we’ll just be looking at endless cycles, just like we did in Hoovy’s world. But will they be as entertaining?

More like this
Entertainment
7.27.2022 4:15 PM
Everything we know about Rick and Morty Season 6
By Corey Plante
Entertainment
7.29.2022 3:00 PM
Amazon’s Paper Girls is the best new time-travel TV show since Dark
By Mónica Marie Zorrilla
Entertainment
8.1.2022 2:00 AM
Westworld Season 4 just copied one of the best Doctor Who episodes ever
By Ryan Britt
Related Tags
Share: