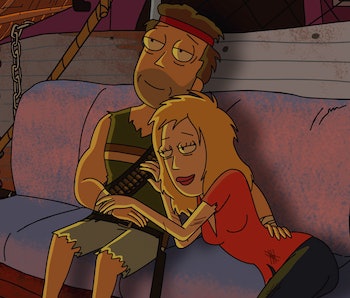 Surprisingly enough, a lot of that sex-positivity will come from Morty’s parents Beth and Jerry Smith. Their rocky relationship led to a temporary separation at the end of the Rick and Morty Season 3 premiere that lasted until that season’s finale. Since then, the couple has been back on track and apparently better than ever.

“It’s a fun season for Beth and Jerry,” Sarah Chalke, who voices Beth, tells Inverse. If the bondage-themed episode teased in the Season 5 trailer is any indication, that might be an understatement.

Inverse spoke with Chalke and co-stars Chris Parnell (Jerry) and Spencer Grammer (Summer). But at the tail end of a busy day of interviews, the Rick and Morty stars were more interested in talking about their characters’ sexuality than the finer plot points of the Rick and Morty multiverse.

“Lots of sexual adventures,” Parnell promises. “Season 5 for Jerry and Beth is mostly about their sexual relationship. It’s kind of all the show explores.” While Parnell’s comment is a bit sarcastic, Grammer confirms “there’s more sex in Season 5.” So maybe this one’s legitimate? Thus far, the series seldom explores sexuality — with a few glaring exceptions.

“I think my parents’ sex life should be really involved and experimental and open,” Grammer says. “There should be a dungeon, obviously — oh no that’s Rick’s lair. Maybe somewhere else. The attic? Do we have an attic?”

“We have not used the attic if there is an attic,” Chalke says.

The layout of the Smith family house suggests that there might be an attic above the second-floor bedrooms where Morty, Summer, Beth, and Jerry sleep. Curiously enough, the official Rick and Morty artbook has neither an attic nor a bathroom, despite the fact that the Smiths obviously have a bathroom in their human home. The “Pickle Rick” opening scene shows Morty in there combing his hair. So who knows? Maybe they do have some kind of dungeon up there.

The mention of a dungeon is interesting considering the fact that all of the Season 5 trailers so far depict some kind of storyline where Rick, Beth, and Jerry dress up in bondage gear in a hellish landscape. Rick even says, “It’s time we raise a little hell!” (An obvious reference to Hellraiser.) The outfits feel reminiscent of the unnerving sex dream/nightmare from Season 1’s “Lawnmower Dog.” In that one, Morty and Rick wind up in a hypersexualized layer of Mr. Goldenfold’s dreams. This, however, seems far more real.

“Is that sexual in nature?” Parnell wonders aloud when asked about this Hellraiser episode. “I don’t remember…”

“We need more of Jerry’s life,” Grammer says. “His parents came once. Where are they? Why aren’t they around more? We need more human holiday stuff!”

It’s a good question. Why don’t we see more holiday-focused episodes? If the recently revealed Season 5 episode titles are any indication, then “Rickdependence Spray” could celebrate July 4, and “Rick and Morty’s Thanksploitation Spektactular” sure sounds like a Thanksgiving episode.

And whatever happened to Jerry’s parents? For all we know, maybe they’ll come around again for Thanksgiving to spread some holiday cheer — and sex positivity.

More like this
Entertainment
8.9.2022 4:57 PM
New Rick and Morty Season 6 trailer suggests Evil Morty is coming back
By Mónica Marie Zorrilla
Entertainment
8.11.2022 2:00 PM
The Midnight Gospel creator has “no hard feelings” over Netflix cancellation
By Jake Kleinman
Entertainment
8.11.2022 12:30 PM
For All Mankind’s game-changing Season 3 twist had been planned since 2018
By Ryan Britt
Related Tags
Share: