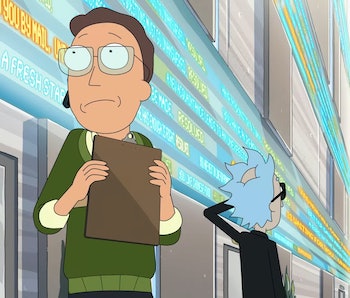 When Jerry Smith goes on an adventure with his father-in-law on Rick and Morty, it’s pretty much always a top-tier episode. Season 3’s “Whirly Dirly Conspiracy,” for instance, is a real standout. Yet when we get a Jerry-Rick adventure in Season 6, Episode 5: “Final DeSmithation,” feels a little uneven.

Sure, it has some of the series’ all-time best action sequences thanks to some fun new Rick gadgets, but like some of the series’ weaker episodes, this one belabors its core gimmick. Too many punchlines feel like inside jokes we aren’t a part of, so we’re left confused and kink-shaming the show’s preoccupation with incest and ... eating poop.

“You will have sex with your mother,” is an ominous fortune to receive for anybody. And yet, that’s what Jerry gets in his fortune cookie after a meal out at Panda Express. While the entire family makes fun of his paranoia about it coming true — especially after grandma starts calling and texting Jerry — Rick humors him.

“You may be the single dumbest human I’ve ever met, Jerry,” Rick says. “But you still have a right to take whatever you want seriously.”

Rick conducts a low-tech experiment to determine the probability of Jerry's future.

Rick quickly figures out that there’s some cosmic power at play — and that anybody who’s eaten a fortune cookie in the last 20 years has digested alien poop.

A megacorporation called Fortune 500 has enslaved an alien beast that eats chaos, but due to a digestive disorder, it also strips randomness from spacetime. Its poop, therefore, bends entropy towards definable outcomes ... in the form of these supernatural Fortune Cookies. Rick tracks the operation down after an epic slow-motion shootout while investigating the Panda Express (to the tune of the instrumental theme from the 1970s television sitcom Taxi). This and every other fight sequence in this action-packed episode are a delight, along with some of the other silly gadgets we see Rick wield.

At one point, he uses a mystical Eye of Thundera gem (a ThunderCats reference) to summon a snazzy black suit for himself and a nerdy assistant outfit for Jerry. The sequence deliberately riffs on the Sailor Moon transformation sequence. Along the way, Rick also uses an extendable eyeball gadget and a cloaking mechanism to turn himself and Jerry invisible. Rick later wields seven mechanical tentacles that come out of his back with various weapons, some more useful than others. He also tucks his head into his suit like a Teenage Mutant Ninja Turtle to avoid being shot in the head.

It’s around the episode’s midpoint, however, that the humor starts to unravel. Fortune 500’s leader is Jennith Padrow-Chunt, an outrageous supervillain and one-woman lifestyle brand unto herself that pretty obviously pokes fun at Gwynyth Paltrow and her Goop empire.

“Every suit I wear is virgin white,” she says. “I sleep on a bed of loose grains and begin every morning by dragging my perfect vagina across Chinese silver grass. I’m firm and ripe.”

It’s spit-out-your-drink surprising, but is it funny?

As Padrow-Chunt walks across her lavish home carrying a pear in a pre-recorded video for potential investors, I couldn’t help but think that the humor here is aiming for the low-hanging fruit. Sleeping on loose grains and putting Chinese silver grass near your vagina do indeed sound like the dangerous things you might read on a Goop blog post, but these don’t make any lick of sense. Wouldn’t it be funnier if Rick and Morty shocked us by showcasing some of the “actual” ridiculous Goop remedies?

Making fun of Gwynyth Paltrow is tired in 2022, but you know what’s wired? Making fun of Elon Musk in 2022. Which is something that Rick and Morty seems afraid to do considering the show’s complicated history with the founder of Tesla. Jeffrey Bezos, Bill Gates, Billy Zane, and various prime ministers from around the world are confirmed members of Padrow-Chunt’s Fortune 500 cult. Like the Chinese silver grass joke, Billy Zane’s inclusion here just feels random. If it were Elon Musk, then it would make sense and be hilarious.

Because let’s be real: If the uber-wealthy could control their fate by becoming a “Level 7 Investor,” then Elon Musk would be the first billionaire in line.

Right after Padrow-Chunt’s pitch on-stage, Jerry gets a text from his mom: After her plane landed, she took a selfie “in front of that Wolfgang Puck that smells like a kindergarten.” A minute later, we see a client being tortured who receives a fortune that reads, “Your penis will be mangled by a frozen yogurt machine at the U.N.!? I know that machine! This would sound impossible to a layman, but to me, it rings inevitable!”

These baffling moments had me googling “what does a Wolfgang Puck smell like” and “frozen yogurt at the UN building” just to see if there was deeper context that I was missing. Maybe I am dense, but it’s also possible that these jokes are just a touch too obtuse.

Then there’s Old M. Hucksbee, the old man who implants the fortunes into the cookies. But he’s also in love with the LOCKER-ian alien beast that’s making all of these fortunes with its poop. His last act before being ripped to pieces to liken his affection for the monster to real-life amateur naturalist Margaret Howe Lovatt, who had a sexual relationship with a dolphin in the 1960s. “I see that I’ve romanticized a wild animal,” he laments, reflecting on how he “assaulted a captive creature.”

It’s a blunt comparison that makes you squirm, but does it make you laugh?

Truly, the action is the saving grace of this episode, especially when Rick pulls a bit of an Everything Everywhere All At Once by using a bunch of blank fortune cookies with unpredictable effects as ammo that he shoots into soldiers’ mouthes. One becomes a bird, another a car, and yet another becomes a robot dinosaur claiming to be “the son of God.” Then Padrow-Chunt herself consumes a bunch to become a twisted Cronenberg monstrosity only for the LOCKER-ian to eat her almost immediately and then Jerry to kick a tube of chaos into a stack of fortune cookies to open up some kind of singularity that threatens to kill them all. Only by using dozens of gadgets at once in an impossible-to-follow action sequence can Rick prevent the incest and save them.

Ultimately, “Final DeSmithation” is the kind of provocative Rick and Morty episode designed to make you feel uncomfortable rather than entertained. It’s a bold story with good action that throws everything at the wall just to see what sticks, and somehow it all stays up.

Earlier this season, “Bethic Twinstinct” gave us an uncomfortable story where Beth has sex with her own clone, which itself feels a bit like incest. On a deeper level, it was about radical self-love that transcends narcissism, ultimately evolving to a place of sexual exploration and liberation where both Beths have a sexual encounter with Jerry. There’s something progressive at play there, just as there was when Beth and Jerry shared a bed with Mr. Nimbus last season and back in Season 1 when Jerry’s parents revealed they were in a throuple with a young man.

Rick and Morty treated Mrs. Smith like a person then, yet here she’s reduced to a clueless prop used for the same joke a dozen times over. To what end? Not even “Final DeSmithation” seems to know.