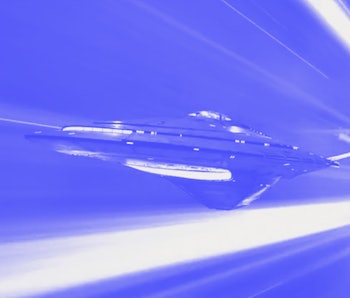 Warp speed will never be the same. In the mid-season finale of Star Trek: Prodigy, a new revelation about how the USS Protostar actually works both changes the existing Trek canon about propulsion through space and doubles down on something you probably forgot about from The Next Generation.

Here’s why the introduction of “proto-warp” in Star Trek: Prodigy shakes up how we think about warp drive in general, and how it could impact the canon of Picard and Discovery. Spoilers ahead for Star Trek: Prodigy Episode 5, “Terror Firma.”

What is Proto-warp in Star Trek canon?

At the very end of Prodigy Episode 5, “Terror Firma,” we learn the mysterious engine powering this Federation starship is literally a small protostar. Yes, the ship called the USS Protostar apparently also has an actual protostar powering some kind of special warp drive.

As the crew of the Protostar tries to escape the clutches of the Diviner, Gywn and Zero kick things up a notch into “proto-warp.” This seems to propel the ship into a totally new kind of realm, something separate and apart from the kinds of warp drive we’ve seen before. In other words, the idea of using an actually tiny protostar as some kind of core for a warp engine is new to Trek canon.

The Next Generation singularity wrinkle

In the loosey-goosey physics of Star Trek, warp drive is made possible by an anti-matter/matter reaction, which creates a warp “bubble” that then allows ships to traverse space and time. The idea of speed in “warp speed” is a bit of a misnomer since the ships are kind of folding (warping) spacetime to get where they want to go. In fact in the first Trek pilot, “The Cage,” in 1964 the term “time warp” was used. Later, everyone just started saying “warp” instead.

For Federation ships in Trek lore, the matter/antimatter reaction is helped-along by dilithium crystals. But, not everybody powers their warp cores that way. In the Next Generation episode “Timescape,” we learned that Romulans used an artificial quantum singularity in their warp cores, presumably, to create a similar kind of spacetime warp effect.

The idea of harnessing the condensed matter in singularities or protostars and somehow turning that into something that makes you travel several times faster than the speed of light is iffy at best, at least IRL. But what’s interesting is that Trek has kind of done this before.

Beyond transwarp — In Star Trek III: The Search For Spock, the USS Excelsior was outfitted with an experimental transwarp drive. We never really were told what that meant, but after Scotty sabotaged the ship, Starfleet never tried “transwarp” again. Over on Discovery, the top-secret “Spore Drive” transported a starship into the mycelial network, which then allowed the ship to emerge anywhere in the galaxy at any time.

We’re not quite sure what proto-warp does yet, exactly, but it appears to be faster than regular warp drive — but not as “fast” as the instantaneous spore drive. The question we’re facing now is: how does this tech impact the 24th technologies of other Trek shows in the same time period? The earliest flashbacks for Star Trek: Picard are in 2385, just two years after the events of Prodigy. Meanwhile, Lower Decks is currently happening in 2381-2382, which is a year before the events of Prodigy. This means that somebody on one of those two shows knows about the proto-warp drive and the USS Protostar.

If this game-changing starship engine is as awesome as it seems to be in this episode, then the warp technology of Picard and Lower Decks could suddenly look very different. In other words, this baby star might make the grown-ups change the way they fly.