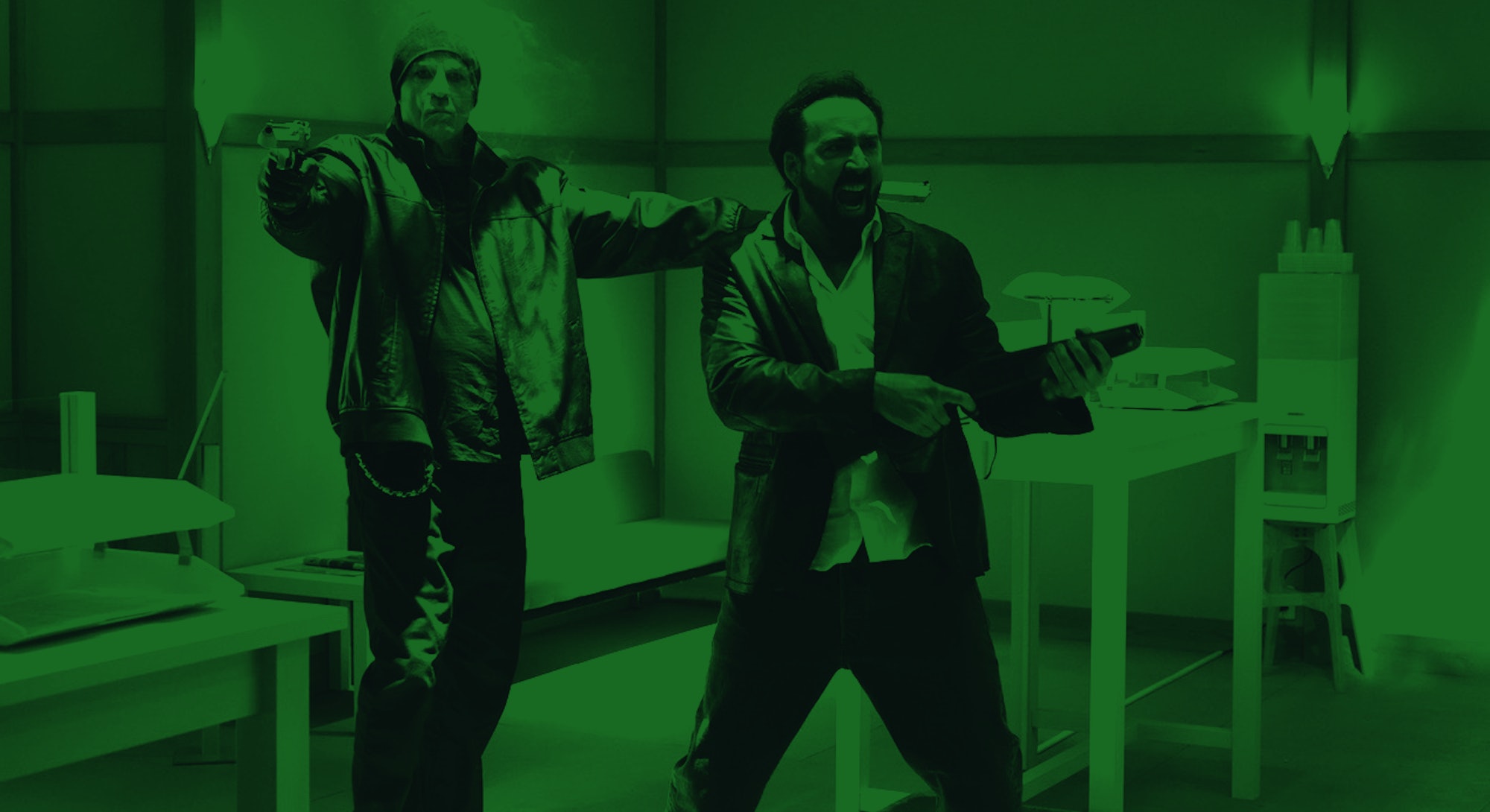 Among the countless arthouse spectacles and underground indie gems premiering at the Sundance Film Festival this month, there's one film that seems to have caught everyone's eye.

Picture Mad Max, Escape From New York, and Yojimbo all rolled into one, and you're almost on track to understanding Prisoners of the Ghostland. This tale of ghosts, samurais, ninjas and warlords follows the perpetrator of a bloody bank robbery sent on a quest to the wastelands at the edge of frontier city Samurai Town. Strapped into a grenade-laden jumpsuit that will explode in three days if he doesn’t return with the missing granddaughter of the town’s head honcho, Prisoners of the Ghostland is, effectively, a one-man rescue mission with little regard for pleasantries.

It’s the kind of unrestrainedly escapist treasure that 2021 somehow already needs. And yes, Prisoners of the Ghostland is the kind of balls-to-the-wall action film that only Nicolas Cage could lead — he even said that it might be "the wildest movie [I've] ever made" — but what of the visionary director behind this runaway train ride of cinematic hallucination?

Considering Prisoners of the Ghostland is his first U.S. production, you'd be forgiven for not being familiar with Sion Sono. Although, with a significant number of his 50-odd feature films already having arrived in the States via renowned film festivals and tastemaker import labels alike, his reputation precedes him.

Sono possesses a catalog as violent as David Cronenberg’s, as surreal as David Lynch’s, as prolific and energetic as Jean-Luc Godard’s, and as fiercely independent as Harmony Korine’s. So with Japan's "most subversive filmmaker" (sorry, Takashi Miike) now preparing to cement his legacy in the West, there's no time like the present to get up to speed.

His breakthrough disturbing J-Horror — Japanese horror movies became an international phenomenon at the turn of the century thanks to breakthrough hits like Ringu and Ju-on: The Grudge. Sono rode that wave to his first international breakthrough. It's fair to say it was a memorable one.

Suicide Club opens with one of the most shocking scenes of the whole J-Horror movement, as an entire class of high school students launch themselves in front of a train in a form of ritualistic mass suicide. Given the gory presentation at a time when Japan’s suicide rates were at an all-time high, this would prove a rather unsavory introduction to the world of Sono. But delve further in, and Suicide Club is, for the most part, a compelling mystery.

A suicide epidemic is spreading via the influence of a nefarious website (an example of the then-trendy theme of Y2K technophobia in horror films), and as wheels of skin (think forbidden fruit roll-ups) begin to show up at the scenes of these deaths, detectives soon find themselves with an increasingly strange case to solve.

Throw in a glam rock gang leader lurking in an underground bowling alley, and you've got a J-Horror classic with the kind of surreal twist that only Sono can deliver.

A four-hour movie — To effectively describe the plot of Love Exposure would take up a proportionate amount of time to its four-hour length. But here's the gist: Yū is forced to commit and confess sins in order to satisfy the misguided expectations of his unstable Catholic priest father. He then winds up on a journey that encompasses upskirt photography, the yakuza, martial arts, a religious cult, and a mental hospital as he seeks to fulfill "an erection from the heart" and find his true love.

Love Exposure was partly inspired by the director's running away from home to join a Christian cult in his teens and otherwise influenced by a diet of B-movies and pornography during his "studies" at Berkeley University in San Francisco. It remains his most notorious effort, and, having won the FIPRESCI Prize at Berlin Film Festival in 2008, a work that marked him out as a director to behold — if not to question, as well.

Sono's postmodern take on the concept would deal with themes of self-identity and power dynamics in a film-within-a-film set on the shoot of one of these saucy movies. It's a striking and artistic twist on the format — one that highlights the intelligent mind in play as well as his knack for provocation. It all climaxes in spectacular fashion — not with a sexual orgasm, but instead with an emphatic explosion of brightly-colored paints.

Regardless of the innovative and contemporary spin of Antiporno, Sono actually did make a more traditional "Pink Film" back in 2000, titled Teachers of Sexual Play: Modelling Urns with the Female Body. It's about a pottery workshop instructor who teaches her students that the secret ingredient to good skills is… love. We'd expect no less.

Pushing boundaries — With a back catalog as rich as Sono's, it isn't easy to know where to start. When it comes to wild ideas, he's dabbled in a bit of everything.

Sonos filmed in Transylvania for the Amazon Prime series Tokyo Vampire Hotel, while Netflix production The Forest of Love chose to focus on the murders, tortures, and extortion committed by serial killer Futoshi Matsunaga in the '90s and '00s. Hazard was a crime film shot on Super 16mm in New York City, while Tokyo Tribe is Japan's answer to The Warriors — only it's a hip hop musical.

With high-school massacres, incest, and horror films about hair extensions making up further highlights, the list really could go on. But for a more recent (and, thankfully, more restrained) highlight, head to the Japan Society this February to view Sono's 2020 comedy-drama Red Post on Escher Street. It's a treat.