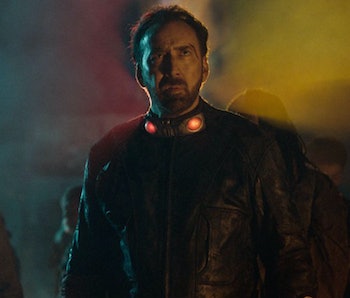 Prisoners of the Ghostland may be the wildest movie Nicolas Cage has ever made — at least, so says Nicolas Cage.

Coming from one of our great on-screen demolition experts, this is a bold statement. Few actors — and almost certainly no Oscar winners — have perfected the art of the freak-out like Cage, a brilliant actor who sometimes appears to pick projects by blindly hurling darts at a board (or, more plausibly, at his agent).

In Prisoners of the Ghostland — directed by the prolific Japanese auteur-poet Sion Sono — Cage plays Hero, a po-faced bank robber imprisoned in the bowels of Samurai Town. This strange and colorfully stylized outpost, where cowboy hats and kimonos are equally in vogue, is lorded over by the Governor (Bill Moseley), a despot whose deep-fried Southern drawl and snow-white suits suggest a hybrid of Colonel Sanders and Foghorn Leghorn.

There are hybrids galore in Ghostland, which was written by Aaron Hendry and Reza Sixo Safai. The film bills itself as an “East meets West” fusion, and Samurai Town is staged iconographically as a cross between Akira Kurosawa’s samurai epics and John Ford’s classic Westerns. All the men carry swords or six-shooters or both, and the women are costumed geisha.

Through its color-mad procession of costuming, lighting, and set design, this is the kind of eroto-cinephilic fantasia where high-noon showdowns take place in hanamachi, along streets lined with cherry blossom trees.

Forcibly recruited to retrieve the Governor’s lovely, headstrong daughter Bernice (Sofia Boutella), who’s fled into the post-apocalyptic badlands outside Samurai Town, Hero is outfitted with a leather suit that’s rigged to detonate if he’s not back with Bernice in five days. Oh, and should he make a move on Bernice, the suit’s explosives are located in his nether regions. The slightest hint of arousal will set them off. And so Hero soldiers off, into the wasteland.

A long way from the Hollywood leading-man purgatory he once found himself in, between comic-book movies like Ghost Rider and action blockbuster hits like Face/Off and National Treasure, Cage has spent the past decade appearing left and right in lower-budget productions. These have been frequently forgettable (Dying of the Light, Pay the Ghost, Primal) and occasionally revelatory (Joe, Mandy).

When Cage is engaged by a filmmaker and a script with a legitimate vision, as in this year’s unexpected tour-de-force Pig, watching him can be sublime, a borderline-religious experience. When he’s decidedly not, as in this year’s lugubrious Five Nights at Freddy’s riff Willy’s Wonderland, watching him can be deeply painful, like catching sight of an old friend who’s fallen on hard times and is embarrassed you’re seeing him this way.

Arriving on the heels of both Pig and Willy’s Wonderland, Prisoners of the Ghostland pairs Cage with a filmmaker as wildly prolific as he is. Sono has helmed 50-odd projects across film and television, including one magnum opus (his four-hour “upskirt-photography epic,” 2008’s Love Exposure). Many of his most inspired genre mash-ups out there range from 2001’s J-horror detective saga Suicide Club to 2013’s romantic yakuza meta-satire Why Don’t You Play in Hell?

All three factor into Ghostland, especially once Hero makes his way to the titular locale. In this carnivalesque junkyard, time has stopped, mutants scrabble around in the debris, and the unluckiest residents are covered head-to-toe in pieces of department-store mannequins. It’s here that Cage goes truly berserk, engaging in an acting style he’s called “Western kabuki theater.” This amounts to him delivering dialogue at constantly shifting decibels and with the off-kilter intensity that’s become a Cage signature. It’s quite something throughout Ghostland, whether he’s screaming “I’ll karate chop you!” at one assailant or angrily spurning a cool car to ride off on a little bike.

Ghostland marks Sono’s English-language debut, and he originally planned to shoot the movie in a Mexican desert before a heart attack mandated that he move production to Japan. Given this, one can infer the filmmaker was at one point pursuing a vision more closely aligned with Alejandro Jodorowsky’s acid Western El Topo and his subsequent avant-garde classics, The Holy Mountain and Santa Sangre.

And slivers of Jodorowsky’s influence remain; Ghostland combines gorgeous and gruesome in a way that harkens back to the lineage of ‘70s midnight-movie sensations sparked by El Topo. Certain images, especially the mannequins embodying the film’s title, vibrate along that same spiritually strange frequency. But the film stages almost all of its action in just two locations, with Samurai Town and the Ghostland feeling unfortunately artificial as a result.

What’s most missing in all this mayhem, though, is the vision of an auteur actively engaged with the meaning of the euphorically gonzo tableaux he’s staging. Ghostland often feels more like artistic forgery than the genuine article, slavish in its devotion to visually approximating Sono's influences' profane and profound imagery yet oddly inert when it comes to doing anything with them.

Ghostland’s 102 minutes pass by, and as aurally pleasing as the film is, its story never really kicks into gear, nor does its pacing thrill the way it should. Sono’s hardcore fanbase will enjoy the callbacks to his previous features littered throughout, but it’s hard not to feel like the director is running on fumes, imitating himself within the confines of an American cinema far less amenable to his once-authentically transgressive verve and political fire.

When the film screened at Sundance earlier this year, its most nirvanic peak was a gory, balletic action setpiece in which Tak Sakaguchi’s samurai Yasujiro sliced and diced his way through a horde of opponents in Samurai Town, all set to Jim Croce’s “Time in a Bottle.” That particular sequence is bizarrely missing from the theatrical cut, suggesting that last-minute tinkering or rights issues have further neutered what already feels like a half-strength outing for both director and star.

It’s hard to say whether there’s a version of Ghostland that would have more confidently matched Cage in all his crazed glory to a filmmaker as idiosyncratic as Sono. Ghostland is worth seeing for its dizzying stream of visuals and absurdist midnight-movie flavor. Still, without a stronger narrative or directorial style driving it, the film dances across the screen and evaporates in your memory like a charged and weightless daydream.

Prisoners of the Ghostland is in theaters, on-demand, and on digital platforms September 17.

More like this
Entertainment
8.2.2022 2:00 PM
Bullet Train proves Hollywood can still move backward
By Eric Francisco
Entertainment
8.3.2022 4:17 PM
Prey is an old school throwback that brings new life to the Predator series
By Eric Francisco
Culture
8.6.2022 11:30 AM
20 years ago, Robert Rodriguez made the strangest sci-fi sequel of the early 2000s
By Jon Negroni
Related Tags
Share: