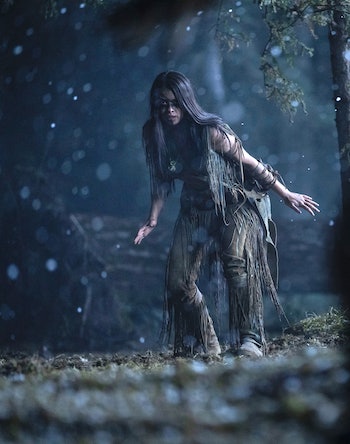 If it bleeds, you can kill it.

It’s a lesson Arnold Schwarzenegger learned 35 years ago in the sci-fi action film classic Predator. Now, a young First Nations woman must learn the same lesson as she takes on a different Predator in the woodlands of the Comanche Nation in 1719.

In Prey, the latest entry in the Predator franchise directed by Dan Trachtenberg and streaming on Hulu, Naru (Amber Midthunder) is an aspiring hunter pitted against a formidable alien killer known simply as “The Predator” (played in costume by Dane DiLiegro).

Instead of the military rifles and explosives so often seen in the series, Naru has little more than tomahawks and arrows, making her a very different action hero from what we usually see in the Predator franchise. Naru is a total badass in her own right as she studies the Predator’s advanced tools and uses them to fight back against her adversary.

In one critical scene at the end, Naru obtains the upper hand by breaking a Comanche tradition. Most viewers probably won’t pick up on it, but the moment actually carries significant meaning for anyone familiar with Comanche superstitions.

Warning: Spoilers for Prey ahead.

Naru is eager to prove her worth as a hunter for her village despite the sexist assumption that a young woman can’t assume such a role in her community. “She repeatedly hears voices of people who tell her she should be somewhere else,” Midthunder tells Inverse. “She has this instinct and strong desire to be where people are telling her not to go. The more that she hears ‘no,’ the more she wants to prove ‘yes.’”

Midthunder compares Naru to Arnold Schwarzenegger's Dutch from Predator, saying they are “instinct-driven” and natural leaders. “I think what’s cool is the duality of how the bigger points of the story relate,” Midthunder observes.

She tells Inverse she kept a Funko toy of Schwarzenegger during filming for good luck. “I was gifted a Pop bobblehead of Arnold Schwarzenegger, his character in the mud, on my first day of work,” Midthunder says. “I had him with me every day in my trailer, in my hotel room. I’d look at him like, ‘You and me, buddy.’”

“It has a direct relationship to the original Predator,” director Dan Trachtenberg tells Inverse. “I’ve seen that movie so many times, I barely needed to revisit it — but I certainly did. We had it on a hard drive and dissected certain points and took a lot of inspiration from it.”

The director notes that Naru “goes on the same journey” as Dutch. As such, Prey resembles Predator in poetic and sometimes literal ways. “In trying to solve the same dramatic and narrative questions, we ended up in similar places,” Trachtenberg says. “That's what links them, on top of the obvious things we sought after to include in the movie.”

There were times even Trachtenberg didn’t know he was following Predator closely. “So many things in this movie ended up being a correlation event when it wasn’t intentional,” he says.

In the middle of Prey, a “mud pit sequence” mirrors another scene from Predator which Trachtenberg says was an unintentional parallel. While filming yet another scene set in a field of tall grass, Trachtenberg gave a note that resulted in a moment with a strong resemblance to Predator.

“I walked over after the first take and said, ‘Maybe do a little shh.’ We do a take and it was awesome. I turned to the DP [director of photography] next to me and I was like, ‘This feels familiar. Where am I stealing this from?’ He looks at me and goes, ‘Predator.’ And I was like, oh yeah. You’re right.”

While stars of action movies often talk about their training for their physically-intense roles, things were a little different for Prey.

“We had a four-week training camp,” says Midthunder. “It was me and all the boys. It was weapons training, like Comanche archery, spears, and knives. I had the tomahawk. It was important for everybody to be as accurate in the portrayal [of Comanche warfare] as possible.”

Producer Jhane Myers, a Comanche and Blackfeet American film and TV producer, says the production worked with Kevin Starblanket, a First Nations individual with a background in military, law enforcement, and survival tactics. “We created with Kevin a Native tactical sign language,” explains Myers. “Even in their off time [the cast] would go down the river and use it to talk to each other. They became proficient. That lent a lot of authenticity.”

“We don’t have many written records of how they operated at that time,” says Trachtenberg. “So we relied on his survivalist instincts and knowing what he knows about the warfare and culture. That inspired the way that they [the characters] bonded with each other.”

Trachtenberg recalls a specific moment during pre-production: “Jane and Kevin sat me down in the training facility that was covered with cardboard boxes meant to represent trees. We were just having a conversation. In the middle of the conversation, the entire tribe shot up and had bows and arrows pointed at me. He then showed me the video of what was happening. They started in the back of the room and moved stealthily through until they got all the way to the front towards me. It was really awesome.”

What the whistle means

For all the ways Prey resembles Predator, there is one thing Naru does that never occurred to Dutch: Long spoilers short, Naru finds a way to attract the Predator as a means to get up close and steal its helmet. She later utilizes the helmet to wield the Predator’s weapons against it.

To get the Predator to show his vulnerable side — by killing a trapped French colonist — Naru whistles in the night to beckon it.

For most audiences, it’s a cool if also strange cue. But for Myers, it’s a cultural “Easter egg” that has made Native audiences freak out (in a good way). “I wanted to leave some Native things that would appeal to Native people, and not appeal to just everyone,” Myers tells Inverse.

She explains that in Comanche tradition, whistling at night is forbidden. “We don’t whistle at night, because you’re told that calls spirits,” she says. But in the scene, the Predator becomes such a spirit, at least symbolically.

“She’s like, ‘I don’t even care!’ She’s got that French trapper as bait telling him, ‘I’m going to kill you!’” Myers explains. “She’s just seen her brother killed, so she’s just going for everything. She whistles at night. Native people are like, ‘Whoa.’ because that means she’s calling it — and lo and behold, he comes.”

Prey is now streaming on Hulu.