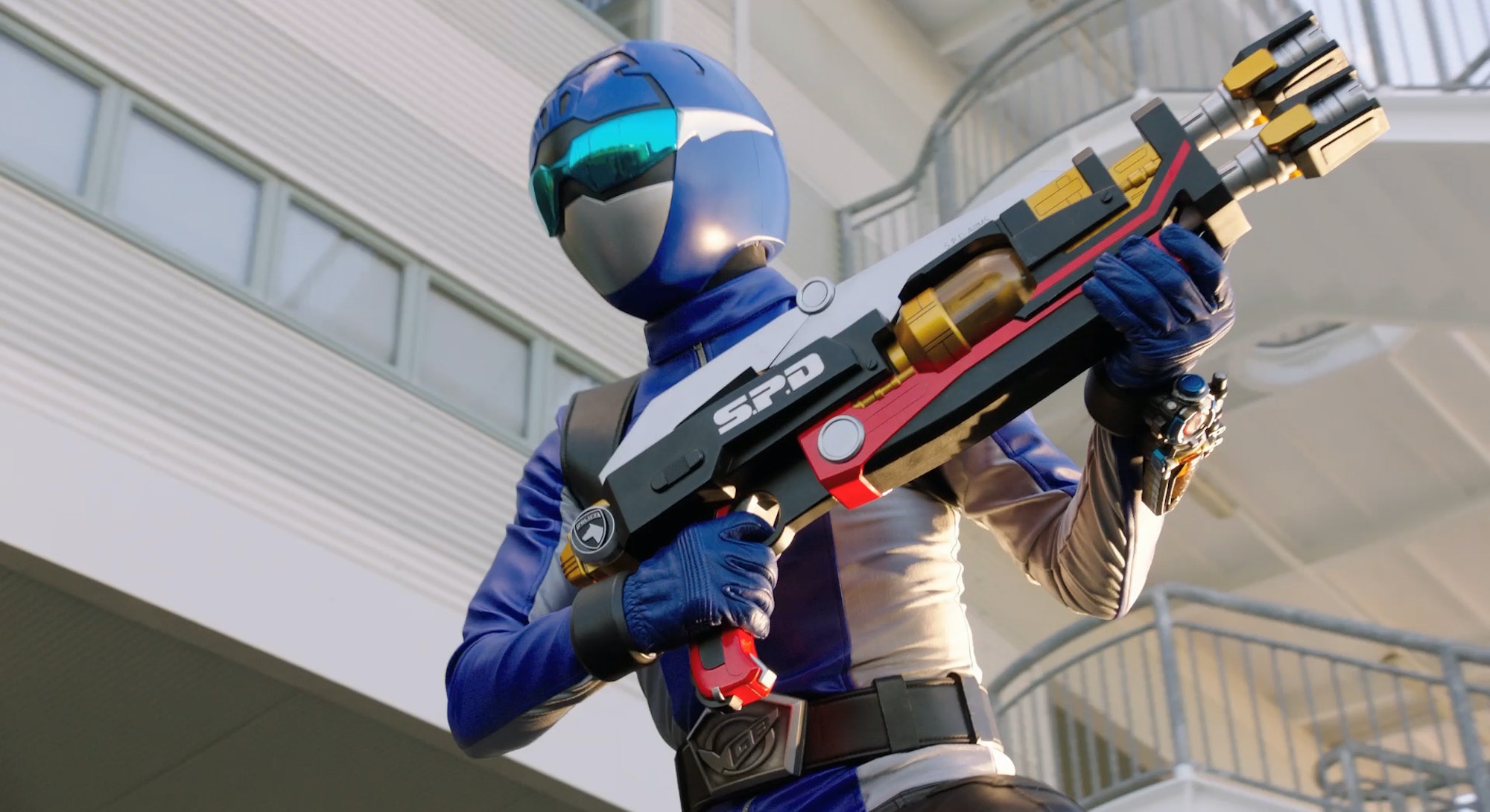 “We shoot in blocks of three, four episodes at a time,” he tells Inverse. “I was directing episodes 18, 19, and 20, all at the same time. It blurs into my memory, especially since I’m so immersed in another season at the moment.”

It’s not that directors like Bennett are flippant about the hugely popular kids show created to sell toys. It’s just that Power Rangers, a long-running series that adapts a different series out of Japan called Super Sentai (itself a staple of Japanese pop culture that reboots every year), is a complex “jigsaw puzzle” unlike any other show airing today. Even an industry veteran like Bennett, director of New Zealand shows like The Almighty Johnsons and Shortland Street prior to his mighty morphin’ gig, needed “a bit of time to get my head around it.”

And then there’s the fact that, well, it’s Power Rangers, a show about teen superheroes fighting rubber monsters with karate. “Often what you’re making is absurd or ridiculous,” Bennett says.

“You constantly pinch yourself: Am I really doing this? There’s a childlike delight in the material, coupled with an advanced technical challenge. It’s a rewarding show to work on.”

Power Rangers Beast Morphers, the 2019-2020 incarnation of Power Rangers that made up the franchise’s 26th and 27th seasons, aired its finale on December 12 on Nickelodeon. Directed by Bennett, the finale staged the heroic Power Rangers in their final stand against Evox, an evil computer virus seeking to rule the world.

As of now, the future of Power Rangers is unknown to anyone outside the walls of Hasbro and eOne. In October 2020, Jonathan Entwistle was reported to take on both a new Power Rangers reboot film and a new TV show, prestige projects that will coexist with Bennett’s Dino Fury. Exactly what the Power Rangers universe will look like is unclear, and Bennett didn’t spill any beans to us.

But with Power Rangers on the verge of renewed relevance, Inverse caught up with Bennett to explain how directing and producing the show isn’t just unlike anything else on TV, but why it’s made Power Rangers so unique for nearly 30 years.

Power Rangers famously recycles so much material from a Japanese TV show. How unusual is making Power Rangers?

It's completely unique. It’s not like any other show. We jump in and out of Japanese footage. There's four to five minutes of Sentai in each 22-minute episode, the rest is original.

The thing about Power Rangers is what is in that Japanese footage. Who the monsters are, which Rangers are fighting, all drive the story. Power Rangers doesn't slavishly follow Sentai, it uses visual elements as a springboard to create a different show. Different settings, different characters.

From a writing point of view, you have to make those [elements] from Sentai fit in Power Rangers. From a directing point of view, there’s two units. There’s an action unit and a drama unit. The main unit shoots with the actors when they have masks off and have dialogue. The second unit shoots when they’ve got helmets on as Rangers fighting monsters. Then there’s Japanese footage and sequences entirely in visual effects.

Power Rangers is a huge jigsaw puzzle. When you’re directing, the scene you’re working on might be broken up into pieces, and you have to make cuts and transitions seamless for the audience at home, which is kids, to hang onto the story.

What were your impressions of Power Rangers before directing it and how did your perception of the franchise change?

To be honest, I didn’t know much at all. What I knew in the ‘90s was it used to be on free-to-air TV, and there was controversy because kids were staging Power Rangers fights in the playground. The show was taken off the air in New Zealand, and found via Netflix.

I knew it existed because it’s an important show within the New Zealand film industry. A lot of my colleagues worked on Power Rangers and spoke highly of the experience. When I found myself directing, I loved it. I appreciate its audacity and complexity.

Power Rangers is one of the few kids’ shows with an adult audience. How do you make a children’s show that adults watch too?

We make it for kids. Our key audience is four-to-six-year-olds. We assume our audience can’t read, so we never put important plot points in text on screen. We keep stories simple enough so we don’t lose our audience. We always have to think, “Would a 4-year-old understand this?” If not, we simplify and make things super clear.

The adult fanbase is significant. If they also find it entertaining, that’s great. Occasionally we treat the adults by doing a crossover or bringing back a legacy villain. Those twists are there for the [older] fans. But even when we do things aimed at adults, we make sure they’re clear to our younger audience because they are our biggest audience. They buy the toys.

Power Rangers Beast Morphers had quite a bit of referencing to Power Rangers history, which excited older fans. How do the writers decide what to reference?

The writers use RangerWiki as a resource. Plus a lot of seasons are on Netflix. But it all depends on the story. Does the story demand it? Does it make it more exciting? Also, what is available?

If we want to bring back a character, are the actors available? In a Covid environment, our borders are closed. It was a challenge to bring our core Ranger actors [for Dino Fury] into the country, we had to get a special exemption from the government. So to bring people casually for two or three days shooting is impossible. They have to go through a two-week quarantine at the border even if we get a government exemption, which is unlikely.

Power Rangers has been produced out of New Zealand since 2003. How does the show influence the New Zealand film and TV industry?

It’s provided continuity of employment. I think it has 700 crew, 1,400 actors each season. Not all full time. But in a country the size of New Zealand, that has a big economic impact.

Power Rangers provides a lot of work for the eight months we shoot every two years. It keeps the skill level of industry professionals high because what we do is challenging and varied. And it’s fun. People think highly of it and want to come back. A lot of the people who work on the show have been on it for many seasons.

What does the relationship with Super Sentai producers, Toei, look like?

The writers drive the conversation with Toei. The inventory of props and costumes is complicated and goes side by side with writing.

We bring a lot of costumes and props from Japan. It’s normal for us to make several sets of Power Rangers costumes because we need stunt versions and spares. We bring one set [from Japan] our patterns are made from. There are also original items that may reflect toys. We’ll design them here and get Toei in Japan to build them for us, because they’ve got the expertise.

But we can’t make helmets. Those are very precious and valuable and brought from Japan. The monsters also come from Japan.

The problem with Go-Busters was that time had elapsed. Rubber had perished. With Beast Morphers, the amount of costumes that had to be remade from scratch was more substantial than usual.

You were the director of the first and last episodes of Beast Morphers. What did the show mean for you?

I felt proud. Objectively, I felt Beast Morphers was a step up on Ninja Steel, in terms of production value and ambition.

I got to kick off the show, which is great from a director’s point because you’re establishing all the conventions. Every season of Power Rangers has rules. How do they morph? How do their weapons teleport? How things work that’s specific to this season and different to previous ones. I got insight into how Power Rangers is developed with Ninja Steel, but I came aboard when things were underway. I wasn’t part of that inventive, make-stuff-up aspect.

The thing about Power Rangers is that it’s been running for 27 years. It's not as if this is the end. It’s the end of a chapter. Everyone is tired, you work long hours, it’s demanding, and people come out thinking, “I can have a breather, see my family, have a life.” But it’s not long before you get curious about what next season brings.