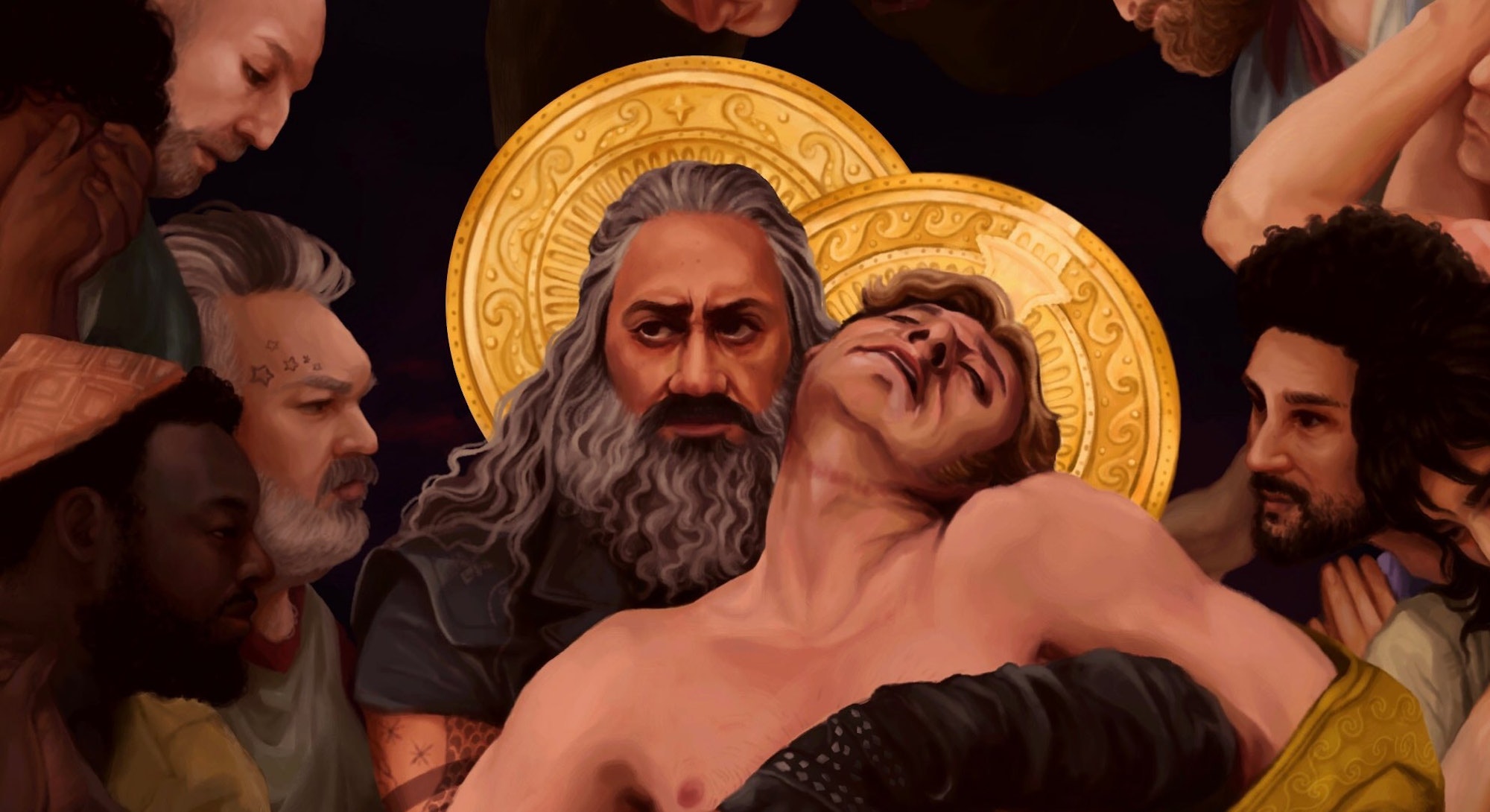 In late April, roughly two months after Our Flag Means Death made TV history with its portrayal of an on-screen gay pirate kiss, a couple of fans found themselves at the center of a viral controversy.

In a since-deleted TikTok video, a duo of teen girls run past Rainbow Row in downtown Charleston as they narrate the trip. It’s a pilgrimage to an almost sacred location: the grave of Stede Bonnet, the Gentleman Pirate.

The video, in which the girls leave flowers on Bonnet’s tombstone and have a picnic nearby, quickly sparked backlash, but not because of the show’s LGBTQ+ themes. Instead, it was fans of Our Flag Mean Death rightfully pointing out that the real Gentleman Pirate was a slave owner who used his wealth to launch a short-lived career on the high seas.

Multiple TikToks have bubbled up onto the app’s For You page depicting fans paying tribute to the real-life man who loosely inspired HBO Max’s beloved pirate comedy. But the response to these videos — and the way other fans have coped with the history behind Our Flag Means Death more broadly — reveal a peculiar feature of fandom in the 21st century.

Our Flag Means Death fans are aware what they’re doing could be seen as lauding a dead slave owner, but they’re quick to draw that distinction in a way that keeps the fandom from spiraling too far. What happens when a fandom gets mixed up with historical figures, especially historical figures who don’t live up to their depiction in media? The answer lies not only in the history of piracy but also in the history of fan culture.

Who was Stede Bonnet, Really?

Our Flag Means Death stars Rhys Darby (Flight of the Conchords) as the self-proclaimed “Gentleman Pirate” Stede Bonnet. While he is very loosely based on the actual historical figure, in the show, Bonnet is a sentimental, optimistic, and frivolous man who captures the attention — and eventually the heart — of the dreaded pirate Blackbeard (Taika Waititi).

In mainstream pop culture, same-sex relationships are usually left up to subtext, relying on fans to make the romantic and sexual tension obvious. It’s a tradition as long as television fandom itself, dating back to hand-typed Kirk/Spock fanfiction newsletters. Our Flag Means Death is a huge step in not only acknowledging but celebrating these usually incredibly subtle relationships in media.

But in real life, Stede Bonnet was a man who built a self-indulgent pirate career on the backs of hundreds of slaves working on a plantation in Barbados, not the bicurious fop shown in the series. This makes visits to the place where Stede Bonnet was hanged only a year after he started his pirate career look misguided, but the trend of Our Flag Means Death fans documenting their trips hasn’t stopped.

Pirates have inspired popular fiction ever since Robinson Crusoe back in 1719, but Our Flag Means Death is unique in how it treats the past as source material. It’s not really historical fiction; it’s more like real person fiction (a term for fanfiction about real people, not characters, usually focused on celebrities).

Abby S. Waysdorf, Ph.D., an assistant professor in media studies at Utrecht University and an expert in the ways real life and fictional worlds intersect, says Our Flag Means Death is a unique blend.

“Our Flag Means Death is already so fictionalized on its own. We’re borrowing the premise and the names of the pirates,” Waysdorf tells Inverse. “We’re also dealing with people who are fairly mythical, to begin with.”

The HBO Max show is more of an homage to Stede than a true adaptation of history, says Jeremy R. Moss, a historian and author of The Life and Tryals of The Gentleman Pirate, Major Stede Bonnet.

“It’s more impactful when it rhymes more than when it repeats what the actual history is,” Moss tells Inverse.

In real life, Blackbeard and Stede Bonnet were contemporaries, but there’s not much evidence they were anything more. Stede didn’t fake his death as he does on the show (and his crew members didn’t wear Crocs). Stede’s true backstory is more than just a bored man who decided to take up piracy.

“The reality is that the reason Stede Bonnet became a pirate, the way that he had the money to buy a ship and hire his crew and pay them a wage, is that he had this generational wealth that was built on the backs of enslaved people,” Moss says.

Though it may seem otherwise, the Our Flag Means Death fandom has a very firm sense of reality. When they write fanfiction, they’re very aware they’re working with fictionalized versions of historical figures. Moss says interest in learning about the real Stede Bonnet has spiked and points to his book’s inclusion on multiple lists of post-Our Flag Means Death reading recommendations as proof.

For Waysdorf, this is an example of “double consciousness,” a term coined in this context by cultural historian Michael Saler. Double consciousness refers to the belief in fictional worlds without losing touch with reality. For example, when Lord of the Rings fans plan trips to New Zealand, they know they’re not walking in the Shire, but they treat it that way nevertheless.

“They understand that a world is fictional but treat it as real,” Waysdorf says. “The double consciousness that people have allows them to do that, to know that the real Stede Bonnet was obviously an extremely different person than is depicted in the show.”

If there’s no way to show devotion to the fictional Stede Bonnet, the real-life one will have to suffice.

“They want to pay tribute to their newfound love of the show, in the kind of the best way that they know how, which is going to these kinds of places and doing silly things that they can post on the Internet,” Waysdorf continues.

For Moss, double consciousness even leaked into research for his book.

“An initial draft had a narrative that perhaps Bonnet leaving the plantation was him pushing back against this patriarchal, slave-owner society,” he says. “But the reality is I didn’t find anything that supported that at all. There’s nothing in the record that says that’s even close to what happened. Do I wish it happened? Sure. But we don’t hear any of that in their historic record.”

After its runaway smash premiere, fans were anxious for a Season 2 renewal, and though they had to wait months, HBO has officially ordered more episodes. So, what’s next? Now that it’s done something very few shows have ever done — shown its two leads fall in love and even kiss — Our Flag Means Death is basically in uncharted territory.

For Moss, Our Flag Means Death isn’t really about portraying a true-to-life historical story — it’s about the mythology of pirates in general — but there’s still some of Stede’s life to be mined.

“I do hope that they address in more detail Stede’s early life,” he says. “His father died when he was relatively young, so I’m hoping that they can use some of that emotional baggage to help explain more about what’s happening to Stede.”

For Waysdorf, Season 2 is a prime opportunity to do something many shows aren’t brave enough to do: establish a queer relationship that normally would just live within the fanfiction. In the renegade world of pirates — and the idealized world of Our Flag Means Death — what does a same-sex relationship look like?

The further this series dives into creating its own narrative, the more it plays with historical record and heteronormative assumptions, and the more fans will learn to draw their own mental line (conscious or not) that these versions of pirates exist on stolen seas of their own. But maybe fans should stop visiting the real-life Stede’s grave — or at least stop posting about it on social media.

Our Flag Means Death is now streaming on HBO Max.