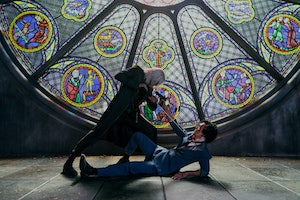 Three, two, one, let’s hit it! (Cue the big brass from “Tank!” the opening credits song from Cowboy Bebop.) That’s right: The time has finally come for Netflix’s much-anticipated live-action series based on one of the most beloved anime shows of all time. If ever there was a piece of science fiction on Netflix that you need to watch, this is it. So buckle up.

For the first time ever, we’re recommending two pieces of iconic sci-fi and their remake/adaptation. There’s the original Cowboy Bebop, but Netflix is also about to get the maligned Total Recall remake despite already having the much-better original. And that’s just four of the 11 treats we’ve got for you.

If you’re hankering for a taste of tomorrow this November as we shuffle our way towards Thanksgiving and the holidays beyond, consider streaming these 11 shows and movies set in some seriously dangerous sci-fi realities. We always pay special attention to what’s new, original, or leaving Netflix soon.

I must admit, the “Lost Session” teaser for Netflix’s live-action Cowboy Bebop series released on October 19 had me a bit concerned with its campy, unserious tone. Yet the full official trailer (embedded above) put all of my fears aside. Cowboy Bebop is definitely silly at times, especially after the final crewmember Ed is introduced, but much of its quality stems is owed to how it artfully oscillates between unpredictable procedural bounty hunting adventure and serialized crime drama.

In a future where much of the Solar System has been colonized, bounty hunters Spike Spiegel (John Cho), Jet Black (Mustafa Shakir), and Faye Valentine (Daniella Pineda) form a scrappy crew aboard the titular Bebop. Each tries and fails to outrun their past, but the action-packed adventures they have along the way are as varied as they are memorable. The overall production quality in the trailer and the excellent casting make this feel like the sci-fi equivalent of The Witcher — with even better special effects.

It was a stroke of brilliance — and probably an expensive gambit — for Netflix to snag the streaming rights to the original Cowboy Bebop anime series a month before the live-action adaptation came out. After an extended stint only on Hulu, all 26 episodes of the space Western were brought to Netflix as of October 21. You could watch a single snack-sized episode every day and be all caught up for the new show!

Bursting at the seams with a smattering of genres (western, pulp fiction, cyberpunk, noir, comedy) Cowboy Bebop is an unforgettable and surprisingly breezy watch. Some “bounty of the week” episodes feel a bit lackluster, as do some other diversions. But when Cowboy Bebop is at its best, there is truly nothing better. If you aren’t immediately hooked, push through until you hit Episode 5, “Ballad of Fallen Angels.” It’s a real highlight that leads into three unrelated stories that are some of the best the show has to offer.

If you dig Cowboy Bebop’s grungy anime aesthetic of a fully colonized Solar System, then consider the Netflix original series Carole & Tuesday. Best of all? It’s also from visionary Cowboy Bebop director Shinichirō Watanabe. So it might as well be the same cinematic universe, right?

In a dystopian future where computer programs can manufacture hit songs at the push of a button, two star-crossed young women form a charming musical partnership on a partially terraformed Mars. Carole is an orphaned refugee from Earth who plays the piano and bounces between jobs. Tuesday is the daughter of an affluent politician with a fancy Gibson acoustic guitar. Their rags to riches story is proof that genuine heart and human passion will always triumph over technology’s attempts to replicate them. And the music is genuinely great!

The actual science fiction is fairly light, but Carole & Tuesday is squarely set in the far-flung future.

All 10 seasons of Star Trek's more realistic cousin, Stargate SG-1, are being removed from the Netflix library at the end of November. This excellent spin-off series is set in the same universe as the film Stargate (1994). The hard sci-fi series takes place in a universe where mankind discovered a "Stargate" that can access a network of similar alien devices spread out across the universe.

The series follows a team tasked with exploring the universe through these portals. Along the way, they encounter all sorts of aliens and interesting worlds. The show's many adventures are often based loosely on human mythology, grappling with heady themes of morality in a more accessible way than the grittiness of something like Battlestar Galactica.

Would you risk your life in a deadly game to win a massive fortune? That’s the question asked by the South Korean dystopian drama series Squid Game, in which 465 people risk their lives playing children’s games for the chance at 45.6 billion Korean won (around $38.6 million).

Games like “Red Light, Green Light” appear with gruesome results for the losers. Instead of hurting one’s childish ego, losing means death. The overall execution here feels a bit like Hunger Games meets Saw and The Purge in a twisted dystopia, but it’s hard not to be enraptured by the fierce competition. Visceral action, strange circumstances, and haunting costumes all make Squid Game gripping and totally eerie.

If you’re squeamish and/or aversive to gore, maybe sit this one out. Otherwise, consider this talked-about series an absolute must-watch.

Sci-fi movies on Netflix in November 2021

A smaller, tighter prequel to this past summer’s zombie-filled blockbuster Army of the Dead, Netflix’s new movie focuses on the German locksmith Ludwig Dieter. Matthias Schweighöfer stars and directs under the guidance of Zack Snyder. Army of Thieves is a fairly straightforward heist movie that is much lighter on the zombies, and yet it wields a kind of big brain reverence for Wagner’s Ring Cycle.

“After a strange series of events, Sebastian is swept up on a globe-trotting mission involving opera, Interpol, and three legendary heists,” Inverse’s Dais Johnston writes in their review. “One could call it the Scream 2 of heist movies: hyper-conscious of the long shadow in which it stands, delighting in upending and acknowledging its tropes rather than merely repeating them.”

Army of Thieves was released on Netflix on October 29, 2021.

Long before Mark Zuckerberg co-opted the term “Meta” for his latest scheme on the way toward world domination, Last Action Hero delivered a smart meta-commentary on action movies. For this to be Schwarzenegger’s first movie after Terminator 2: Judgement Day truly boggles the mind.

A teenager mourning the loss of his father gets a magic ticket once owned by Harry Houdini, and it transports him into a movie featuring his favorite action hero: Schwarzenegger’s indestructible Los Angeles cop Jack Slater. Within this fictional reality, Slater is an unstoppable badass but once he migrates into the “real” world is dismayed to find that he is mortal. Schwarzenegger also plays himself within that “real” world.

Last Action Hero may be certified rotten on Rotten Tomatoes, but I disagree. Maybe it’s my rose-tinted glasses from growing up in the era when Schwarzenegger was king of the box office. Nonetheless, I wholeheartedly agree with Uproxx’s Mike Ryan when he wrote last year that “Last Action Hero is incredible and was ahead of its time.”

No offense to the reliably excellent Colin Farell, but you can’t just replace Arnold Schwarzenegger with a handsome Irishman and deliver the same vibes. Like many remakes of ‘90s action classics, 2012’s Total Recall takes things too seriously and forgets that campiness is what makes that era of film fun.

Based on Philip K. Dick’s 1966 short story “We Can Remember It for You Wholesale,” Total Recall takes place just before the dawn of the 22nd century. Jaded factory worker Douglas Quaid dreams of being a spy and pays to have a company implant artificial memories in his mind — except the technicians find that he has real memories of being a spy. What ensues is a mind-bending action spanning across the solar system.

The action sequences and special effects are solid in this remake, but the overall execution is unimaginative and bland.

A word to the wise: skip the remake and watch the original instead. "Get your ass to Mars!" Arnold Schwarzenegger says to himself via a pre-recorded message. The overall plot of both versions of Total Recall remains mostly consistent, but Schwarzenegger’s larger-than-life presence as an actor really carries a movie with entertaining sci-fi and just enough witty humor to balance everything out.

Schwarzenegger in his prime plays the same factory worker Douglas Quaid who learns that all of his memories may be fake implants. So he's thrust into some action-packed espionage that takes him to Mars to save the entire planet. Total Recall is goofy and a lot of fun, like so many of Arnold's blockbusters from the '90s. It's hard to imagine anybody else in this role, which is a big reason why the 2012 remake simply is not as good.

2. Snakes on a Plane

It’s got snakes! It’s got a plane! It’s got Samuel L. Jackson dropping F-bombs like he’s in a Quentin Tarantino movie! What more could you possibly want from an irreverent movie where there’s just a ton of deadly snakes on a regular plane?

After a surfer/dirtbike racer witnesses a brutal murder committed by a crime syndicate leader, it’s up to Samuel L. Jackson’s FBI Agent Neville Flynn to escort him from Hawaii to Los Angeles so he can testify and put that villain away for good. Too bad that crime syndicate leader is a total sicko with a convoluted master plan that would make Doctor Evil cringe: Not only is there a time-release crate full of deadly snakes of all sizes, but all of the passengers leaving Hawaii are wearing flower leis sprayed with a pheromone that makes all of the snakes very aggressive.

Shenanigans ensue in this gleefully ridiculous mashup of horror and action with a healthy dose of pseudoscience.

Snakes on a Plane will board the Netflix library on November 1, 2021.

1. The Mitchells vs. The Machines

Here’s this month’s family-friendly recommendation: From producers Phil Lord and Chris Miller (the team behind Spider-Man: Into the Spider-Verse), The Mitchells vs. the Machines is the story of a dysfunctional family who comes together to save humanity from a robot apocalypse. They’ve got a goofy-looking pug, too!

The action is entertaining. The comedy is hilarious. It’s also got an incredible cast with Maya Rudolph, Danny McBride, and Abbi Jacobson, to name just a few. The end result is a stunning animated film that will make you laugh, gasp, and maybe even cry as you watch this ridiculous family come together to save the world from a Siri knockoff gone rogue. To be honest, this might be a great movie to fire up on Thanksgiving Day when you're hanging out with the whole family — assuming you’re not watching football already.