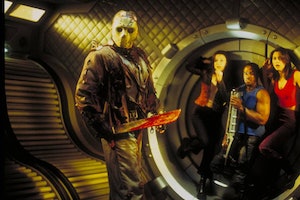 Did you know that Jason Vorhees (of Friday the 13th fame) once wound up on a spaceship in the distant future to murder a bunch of students? While perhaps "bad" as a movie, Jason X is an underrated horror flick that leans heavily into science fiction. It's also one of the many new additions coming to Netflix this March.

Outside of The Dark Knight (one of the greatest superhero movies of all time), most of this month's shows and movies present a grim look at the far-flung future — whether we're talking about a zombie murder man named Jason stalking kids on a spaceship or some kind of alien invasion from outer space.

Anyone hankering for a taste of tomorrow should consider watching these 11 science fiction shows and movies available to stream on Netflix. As always, we'll spotlight whatever's new, original, or leaving soon.

Christopher Nolan's seminal superhero masterpiece, The Dark Knight, once again sweeps back onto Netflix this March. The film details Batman's attempts to dismantle Gotham City's criminal underworld just as the Joker emerges from the shadows to wreak havoc. Against the backdrop of great unrest, yet another famous supervillain arises to complicate things further.

No DC Comics film will ever match this outing in terms of gravitas and thematic potency. Christian Bale plays an excellent conflicted protagonist. He truly makes it seem like Batman is his real identity and Bruce Wayne is the mask he wears. Heath Ledger’s unnerving performance as the Joker is also one for the supervillain hall of fame.

It's a mind-bending swap this March because even though The Dark Knight is back, Christopher Nolan's follow-up, Inception, will fade away after only just rejoining the Netflix library in February.

This iconic yet totally bizarre movie is all about a technology that allows people to enter others' dreams. A star-studded cast including Leonardo DiCaprio takes us through a heist inside several layers of dreamscapes to ultimately explore the nature of consciousness in compelling ways.

If you're already a fan of sci-fi, chances are you've seen this seminal classic that's both a rock-solid heist movie and a cerebral bit of science fiction. But if you need a palate cleanser after the purposefully obtuse Tenet, then Inception may be the perfect thing to watch.

Inception will be removed from the Netflix library on March 31, 2021.

2021 may seem like an exhausting time to watch any sci-fi films that focus on a global pandemic, but Will Smith's I Am Legend is an exciting adventure with supernatural twists.

After a genetically re-engineered measles virus touted as the cure for cancer instead mutates, 90 percent of the world's population is killed. Nine percent turn into vampiric Darkseekers, seemingly brainless zombies who can move and extreme speeds, but only at night due to their vulnerability to UV light. The remaining 1 percent, like protagonist Robert Neville (Will Smith), is immune. As an army virologist, Neville is uniquely suited to surviving for several years while trying to engineer a vaccine using his own blood.

The vibes here greatly resemble the video games in The Last of Us series with urban environments being reclaimed by nature, but that beauty is offset by the brutal threat of zombies. Say what you will about the divisive ending, but I Am Legend gets by on the strength of Smith's acting and charisma with an interesting script.

Jason X may look like the kind of joke movie you'd see as a fake movie trailer within another movie, but it does exist. Released in 2001, it's a product of a strange era of cinema where slasher horror leaned heavily into camp and silliness. So sci-fi VFX master James Isaac sent the mass murderer Jason Vorhees, son of a summer camp cook, into space.

Jason, a superpowered undead killing machine (so to speak), is being experimented on by the U.S. government when he's cryogenically frozen. 445 years later, a group of students on Earth-Two embark on a field trip visit the original Earth. Rather than go anywhere interesting, they investigate the lab where Jason was being held. After making the terrible decision of bringing his body onboard, he embarks on a grisly murder spree that incorporates novel sci-fi elements.

There are holograms, nanobots, and all manner of dangerous chemicals, technology, and other equipment aboard the ship. At the very least, it's a departure from the series' familiar trappings.

If you appreciate actress Lindsey Morgan's work as Raven in The CW's post-apocalyptic sci-fi series The 100, Skylines may be just what the doctor ordered.

The series began with 2010's Skyline, which featured a full-on alien invasion with bright lights and brain-stealing. Here, the alien-human hybrid Rose Corley from the second film, Beyond Skyline, is all grown up (and played by Morgan) and has developed superpowers as a result. To stop a virus that threatens to turn friendly alien hybrids hostile, she has to lead a crack team to the alien homeworld, destroy a beacon, and save humanity.

Everything feels wildly derivative, but this movie is less than a year old. The production quality is there even if the writing and character development are a bit lacking. For fans of the series, Skylines is a must-watch, but you might find it entertaining even if you have no idea what's going on. And if you want to, start with Beyond Skylines, which is already available to stream.

Space Sweepers was one of the best things to hit Netflix in February, so if you haven't watched it yet, the time is now.

In the year 2092, environmental disasters have made Earth uninhabitable, so most of humanity spends their time on gritty spaceships out in space. Written and directed by Jo Sung-hee, this South Korean space opera feels reminiscent of Syfy shows like Dark Matter but with a much bigger budget.

A ragtag group of misfits who forage for junk in outer space accidentally discover a young girl who turns out to be some kind of android super-weapon. Do they sell her off to the highest bidder to finally have enough money to live comfortably? Or do they contend with all the nefarious forces and protect their new friend with their lives? The film starts with four people trying to save themselves, but once they are compelled to save the child, the scope and stakes balloon outward until they're saving the world.

"Get your ass to Mars!" I can still remember hearing Arnold Schwarzenegger say this to his future self in this unforgettable 1990 sci-fi film co-starring Sharon Stone. Loosely based on the 1966 Philip K. Dick short story "We Can Remember It for You Wholesale," Total Recall takes place in 2084 when memory modification and implants are almost as common as interplanetary space flight.

Schwarzenegger in his prime plays a construction worker who learns that all of his memories may be fake implants, and he's thrust into some action-packed espionage that takes him to Mars to save the entire planet. Total Recall is campy, goofy, and a lot of fun, like so many of Arnold's blockbusters from the '90s. And it's hard to imagine anybody else in this role — which is a big reason why the remake from 2012 is so bad.

The transdimensional Kaiju meets mecha universe created by Guillermo del Toro's excellent 2013 film Pacific Rim lives on in the form of this Netflix anime series. Teenagers Taylor and Hayley have been left behind in Australia, which has been overrun by Kaiju and mostly evacuated during a time period that seems to take place before the first movie. Together, they teach themselves how to pilot an abandoned Jaeger with the hope of finding their missing parents.

Made by Polygon Pictures, the same studio that made Levius and Ajin: Demi-Human, The Black's animation style may look familiar to Netflix anime diehards. The scope and stakes here are much smaller than the blockbuster films, especially when it's two kids piloting a training Jaeger with not much offensive power. If you're a fan of mecha anime and the Pacific Rim movies, this one feels like a no-brainer.

Pacific Rim: The Black Season 1 invades our dimension on March 4, 2021.

"How far would you go to find The One?" It's a provocative question in this series based on a book of the same name with a premise that feels like an extended Black Mirror episode. Dating has been broken down into a science: All it takes is a DNA test for anyone to find their genetic soul mate. But after someone dies, the woman who started it all comes under investigation, and what police find isn't so simple.

The show will chronicle Rebecca's "reckless" journey to helping people find love using flashbacks to contextualize the events in the present day. The core plot hook here could be the setup for a balanced, charming dramedy, but instead, Netflix is marketing this one as a tense thriller. But will it be the right match for you?

One of The CW’s best non-Arrowverse programs, The 100 is a YA dystopian drama with a hard sci-fi premise and LOTS of steamy romance for the teenaged characters. And if you also enjoy Skylines this month, then you simply must watch The 100 to see Lindsey Morgan as Raven, a smart-mouthed grease monkey with one of the more interesting narrative arcs in the entire series.

Following the nuclear apocalypse, a portion of humanity took to a series of connected space stations to survive the radiation. Almost a century later, supplies are diminishing, and a group of 100 delinquent children is sent down to test survivability on Earth’s surface. During Season 1, Raven refurbishes escape pod to join her boyfriend on Earth and in the ensuing years becomes a major leader, despite the fact that her boyfriend is a total jerk.

The 100 still thrives on The CW by evolving in all sorts of unexpected ways as the survivors rejoin with other people from the space station and have to integrate into the society of "Grounders" or people that survived the apocalypse on Earth. The upcoming seventh season will end the series.

The Black Mirror Season 2 premiere, "Be Right Back," remains the pinnacle of what Netflix's cerebral series is capable of doing to our hearts and brains. Martha (Hayley Atwell) is left alone and grief-stricken in a strange country home after her partner, Ash (Domhnall Gleeson), dies suddenly right after they've moved in. But there exists a digital service that scans Ash's digital personality across various social media accounts to create an artificial intelligence. (So yes, this is very similar to Her.) Except things escalate in uncomfortable ways once the AI Ash is uploaded to a synthetic body.

By most accounts, "Be Right Back" is one of the all-time greatest Black Mirror episodes thanks to the performances of its two leads, and that won't change anytime soon. So whether you're a diehard fan or just want to test out the best the show has to offer, now's as good a time as any to watch.

All of Black Mirror is streaming now on Netflix.