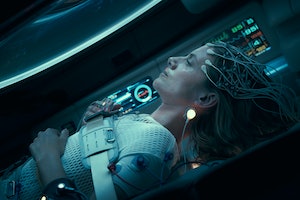 Great Scott! Watch out for whiplash, because after careening back onto Netflix at the start of May, all three Back to the Future movies are somehow leaving at the end of June. It’s almost fitting considering the time-traveling nature of the series. But seriously Netflix, what’s going on here?

May 2021 was a chaotic month on Netflix with plenty of new sci-fi coming in and old shows and movies going out. As it turns out, the gritty live-action superhero show Jupiter’s Legacy is a bit of a letdown. The claustrophobic Oxygen is great. And Zack Snyder’s Army of the Dead? Somewhere in between.

This June, if you find yourself hungering for a taste of tomorrow, consider these 11 science fiction shows and movies. As always, we’ll pay special attention to what’s new, original, or leaving Netflix soon. But ultimately, you just want the good stuff, right?

This French sci-fi film is Certified Fresh on Rotten Tomatoes with 89 percent positive from critics and 76 percent from the audience following its May 12 debut on Netflix. Our Inverse review, written by Dais Johnston, calls it “the first great sci-fi movie of the Covid-19 pandemic.” (!!!)

Directed by Alexandre Aja and starring Mélanie Laurent, Oxygen is about an amnesiac woman who wakes up from cryogenic stasis with no memory of how she got there. She doesn’t even remember her own identity! She has to piece together the clues with the aid of an AI called MILO before she runs out of — you guessed it — oxygen. MILO won’t comply with her request to unlock the cryo pod, but he will give her access to some kind of internet so she can uncover her past.

Remember that 2010 movie called Buried where somebody buries Ryan Reynolds alive in a coffin and he just spends 90 minutes sort of panicking? Imagine that mixed with Gravity, and you’ve got an idea of what to expect.

What gives, Doc? The most important time travel franchise of all time (hehe) is already going to become a thing of the past ... again. All three Back to the Future movies are cultural touchstones that even get namedropped in Avengers: Endgame, and after rejoining Netflix on May 1, they’re leaving on June 30.

In these films, teenager Marty McFly (Michael J. Fox) is best friends with a disgraced nuclear physicist Dr. Emmett "Doc" Brown (Christopher Lloyd) who transforms a DeLorean automobile into a time machine. After traveling back in time, Marty has to navigate high school with his parents in the first film and endure smooching his mom. In the second, he and Doc wind up in the future for other hijinks. Then the third film brings them all the way back to 1885 for what’s essentially a steampunk adventure.

Back to the Future is a series of lighthearted romps with likable characters that never takes itself too seriously, but the lovable dynamics at play are always fun.

What is it about Dave Bautista that makes him so damn likable? Unlike so many hulking bruisers in Hollywood, he’s effortlessly charismatic. Maybe it has a lot to do with his role as Drax the Destroyer in the MCU?

He gets the starring role in Army of the Dead, a Zack Snyder film that just hit Netflix on May 21. It’s essentially a high octane Ocean’s 11 with big guns, bigger personalities, and loads of zombies. Las Vegas has been decimated and quarantined following an outbreak. Dave Bautista's Scott Ward leads a group of mercenaries on a mission to reclaim a bunch of money from one of the casino bosses.

Army of the Dead is ambitious, long (148 minutes), and totally worth it for a bombastic and brainless good time. Audiences like it more than critics — to the tune of 69 percent for Rotten Tomatoes critics and 76 percent audience — but that makes for a nice experience. This one’s also in theaters, so if you’re vaccinated and want a raucous time at the movies, consider it.

8. The Mitchells vs. The Machines

From producers Phil Lord and Chris Miller (the guys behind Spider-Man: Into the Spider-Verse) and first-time movie director Mike Rianda, The Mitchells vs. the Machines (formerly titled Connected) is the story of a dysfunctional family who comes together to save humanity from a robot apocalypse.

Full of comedy and action, the film has an incredible cast (Maya Rudolph, Danny McBride, and Abbi Jacobson, to name just a few). It also takes the innovative technology used in Spider-Verse and pushes it in weird new directions. And it’s relatively new, having only just hit Netflix at the end of April.

“We took all those tools on Spider-Verse and just like bent them,” Rianda tells Inverse. The result is a stunning new animated film where every frame looks like a painting. The Mitchells vs. the Machines will make you laugh, gasp, and maybe even cry as you watch this ridiculous family come together to save the world from a Siri knockoff gone rogue.

7. Cloudy with a Chance of Meatballs

One of my all-time favorite children's books was transformed into a stunning and hilarious animated picture back in 2009, and I've loved it ever since. A quirky young inventor accidentally develops a device that creates giant pieces of food that integrate with local weather patterns. It quite literally begins to rain meatballs, but that's only the beginning.

The obnoxiously named "Flint Lockwood Diatonic Super Mutating Dynamic Food Replicator" (FLDSMDFR) quickly grows out of control, throwing Flint's home into chaos. Will he be able to save the day? Or will they all drown in marinara, soup, sriracha, mashed potatoes, mayonnaise, ketchup .... etc?

Phil Lord and Christopher Miller (the same duo behind The Mitchells vs. The Machines) did this one, so catch their work before they hit the big time — before it leaves Netflix.

Cloudy with a Chance of Meatballs clears out from Netflix on June 30, 2021.

Jason X may look like the kind of joke movie you'd see as a fake movie trailer within another movie, but it does exist. Released in 2001, it's a product of a strange era of cinema where slasher horror leaned heavily into camp and silliness. So sci-fi VFX master James Isaac sent the mass murderer Jason Vorhees, son of a summer camp cook, into space. A great Screen Rant ... rant ... about the movie argues that it’s “better than its bad reputation.” We agree.

Jason, a superpowered undead killing machine (so to speak), is being experimented on in the present(ish) day by the U.S. government when he's cryogenically frozen. 445 years later, a group of students on Earth-Two embark on a field trip to visit the original Earth. Rather than go anywhere interesting, they investigate the lab where Jason was being held. After making the terrible decision of bringing his body onboard, he embarks on a grisly murder spree that incorporates novel sci-fi elements.

There are holograms, nanobots, and all manner of dangerous chemicals, technology, and other equipment aboard the ship. At the very least, it's a departure from the series' familiar trappings. This one’s only been on ‘flix since the beginning of March, but now it’s about to leave.

Netflix could not have picked a better time of the year to drop Black Summer Season 2. It hits the platform mere days before summer begins! Oh wait ... this just in ... we’re hearing that Season 2 takes place ... in the winter?

Black Summer is a bleak and action-packed zombie series with more fast-paced unead akin to 28 Days Later. That dramatically alters the literal and structural pacing of the show compared to something like The Walking Dead. It’s a masterclass in tension by focusing less on zombie hordes and more on how a single living person struggles to survive just one infected. Survivors are ill-equipped to handle this apocalypse.

The show is sort of an anthology, following various characters as they fight for their lives, meet one another, fight some more, and more often than not, get eaten by zombies. Black Summer is not afraid to kill off your favorite characters, much like Game of Thrones. Season 2 does indeed take place during winter, at a time when survivors must deal with dangerous militias and scavengers, all of them more desperate than ever before.

4. The Twilight Zone (The Original Series)

The Twilight Zone is the epitome of an anthology show. Hosted and narrated by the unnervingly suave Rod Serling, there’s always something strange going on in this black and white world, and it’s always resolved in a tight half-hour.

Whether it’s William Shatner getting increasingly paranoid on an airplane, Carol Burnett realizing fame and fortune isn’t enough, or Peter Falk as a Castro-analog with a magic mirror, The Twilight Zone never has two episodes that are alike. You can, however, always count on a twist and a haunting moral read by Serling at the end of each story.

If you’re intimidated by the sheer volume available, don’t worry. There aren’t really any bad episodes. Just dive into the Zone headfirst, perusing your way through and finding the settings and premises that intrigue you. This is the dimension of imagination. It is an area which we call The Twilight Zone. — Dais Johnston

The Twilight Zone (The Original Series) will vanish from the Netflix library on June 30, 2021.

David Lynch’s Twin Peaks is a surreal and beloved cult favorite from David Lynch in which FBI Agent Dale Cooper (Kyle MacLachlan) travels to the small titular town of Twin Peaks, Washington to investigate the murder of homecoming queen Laura Palmer. Though campy and incoherent at times, Twin Peaks is a gripping mishmash of murder mystery with soap opera drama.

The series is, as the kids might say, “a whole ass mood.” It’s an experiment in TV atmosphere, riddled with the implication that sinister supernatural forces abound, often inspiring more questions rather than answering any. Shows like LOST, True Detective, and many more owe a lot to Twin Peaks for its groundbreaking approach. It’s just too bad that it’s leaving Netflix.

Twin Peaks will be removed from the Netflix library on June 30, 2021.

There were more than two full years between the first and second seasons of Netflix’s Love, Death & Robots. Season 2 was only just added in mid-May, so it’s definitely a hot topic on the streaming platform. Our Inverse review notes that the series is better than ever.

Episodes vary between five and 15 minutes — or more — and use different animation styles to tell stories within the realms of sci-fi, fantasy, horror, and comedy. This totally unique series from Deadpool director Tim Miller and David Fincher is always surprising and occasionally outrageous.

“Season 2 lets the script drive the action, using the lush visuals to flesh out and add details to the narrative,” Dais Johnston writes. “These stories are more interested in where each new world lies within its story, not where each story exists in the world.”

In the crowded arena of cerebral animation made for a more mature audience — think Rick and Morty and Adventure Time — Netflix’s Midnight Gospel is an absolute revelation. Its experimental nature caters to the stoner crowd, but it’s satisfying to anyone thirsty for a philosophical challenge.

Set in a vibrant, far-out future where “spacecasters” have replaced podcasters, The Midnight Gospel chronicles the adventures and interviews conducted by Clancy Gilroy, a pink dude in a wizard hat. Using a malfunctioning universe simulator, Clancy travels through various alien worlds to interview various beings. Virtually all of the dialogue comes from series creator Duncan Trussell and real-life interviews conducted on The Duncan Trussell Family Hour podcast with mystics, gurus, and other religious leaders. Topics range from drugs and spirituality to the nature of the multiverse.

The Midnight Gospel juxtaposes these deep conversations with vibrant animated worlds, brain-melting sci-fi concepts, and even a compelling overarching narrative for Clancy. It is a pure visual and intellectual delicacy.