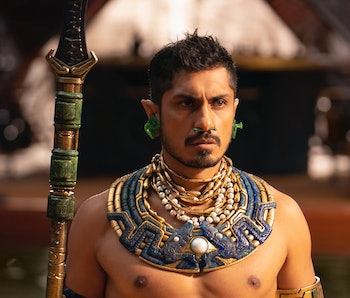 At last, Namor the Sub-Mariner has surfaced in the Marvel Cinematic Universe. But while you shouldn’t expect the Wakanda Forever antagonist to score a solo film anytime soon, this doesn’t mean he can’t return.

In an interview with TheWrap, Black Panther producer Nate Moore confirms that the complex movie rights to Namor, one of Marvel’s oldest comic book characters, prevent Marvel Studios from producing a standalone Namor movie. The rights currently belong to competing Universal Studios, alongside the rights to the Hulk.

But just like the Hulk, the rights issue doesn’t keep Namor from appearing in other Marvel films. It also doesn’t restrict Marvel’s interpretation of the character. “It honestly affects us more ... in how we market the film than it does how we use him in the film,” Moore told TheWrap.

In 1996, Marvel was navigating bankruptcy when it auctioned off the film and TV rights to its many characters. The X-Men ended up at Fox, Spider-Man at Sony, and the Hulk and Namor at Universal. A 1997 Variety article described Marvel’s comic book characters as being “scattered ... all over town.”

Today, of course, Disney’s MCU is a powerhouse. Moore tells TheWrap that Namor is “borrowed” from Universal in a similar manner to how Marvel borrows the Hulk. In fact, the Hulk provides a blueprint for determining how Marvel could use Namor from now until the climactic Avengers: Secret Wars in 2026.

While the Hulk hasn’t starred in his own movie since 2008’s The Incredible Hulk, he’s not scarce. Mark Ruffalo has appeared in several Marvel movies, including The Avengers, Thor: Ragnarok, Avengers: Infinity War, and Avengers: Endgame. He also cameoed in Shang-Chi and the Legend of the Ten Rings, and enjoyed a supporting role in the Disney+ series She-Hulk.

Namor could follow a similar path. While Namor can only star in his own movie if Universal makes it, there’s nothing stopping Marvel from deploying Namor in future Marvel movies and shows as long as the marketing doesn’t imply it’s a solo project.

In the comics, Namor is a prolific character who’s deeply involved in important events. He’s been an ally of the X-Men and the Avengers, he’s flirted with Sue Storm, and he co-founded the Illuminati. He’s sided with Captain America in Civil War, fought Skrulls in Secret Invasion, and splits the Phoenix Force’s powers with Cyclops and Emma Frost in Avengers vs. X-Men. His resume is stacked, so it would make sense for him to be the “next” Hulk. He won’t star in his own movie, but he’s still an A-list superhero with the potential to weigh in at important moments.

Marvel also keeps creative control over Namor, which Moore says gave director Ryan Coogler the freedom to pursue a Mesoamerican spin. “There weren’t really things we couldn’t do from a character perspective for him,” Moore told TheWrap.

With new crossover movies like Avengers: The Kang Dynasty and a Fantastic Four flick on the horizon, Marvel fans will likely see more of Tenoch Huerta’s deliciously sinister Namor. He may not be powerful enough to conquer legal boundaries, but he’s well on his way to conquering the surface.

More like this
Entertainment
11 hours ago
Ant-Man's Memoir Is Real and Hints at Dark Quantumania Ending
By Eric Francisco
Entertainment
Jan. 26, 2023
Corey Stoll could have the chops to make a live-action M.O.D.O.K. work
By Mónica Marie Zorrilla
Entertainment
Jan. 25, 2023
The MCU could bring back a hero from its most underrated TV show
By Dais Johnston
LEARN SOMETHING NEW EVERY DAY.
Related Tags
Share: