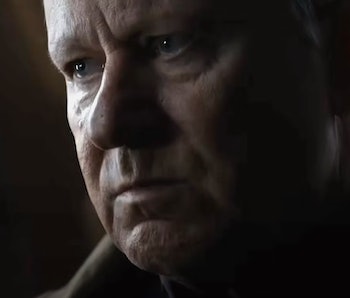 The best part about Andor is that it barely feels like Star Wars. That may seem counterintuitive, but after Disney spent the last 10 years jamming Easter eggs and cameos down our throats, it’s refreshing to watch a Star Wars show that isn’t about Jedi, Sith, or the Force at all.

Andor is a grounded political-spy thriller that just so happens to take place in the Star Wars universe. But there’s one theory that could completely redefine Andor’s connection to the franchise by revealing a Force user who’s been hiding in plain sight.

Is the Rebel leader Luthen (Stellan Skarsgård) a secret Jedi? After Andor Episode 11, this ludicrous fan theory seems more likely than ever.

Light spoilers for Andor Episode 11 below.

Last week, we speculated that Luthen could be an ex-Jedi who witnessed Order 66 and swore off the Force entirely. Besides his steely attitude, the best evidence we had was the crystal he gave to Cassian Andor (Diego Luna), which looks a bit like one of the kyber crystals used to power lightsabers.

But Episode 11 pushes this Andor theory even further. At one point in the episode, Luthen jets off the visit fellow Rebel leader Saw Gerrera (Forest Whitaker). When Luthen arrives, guards demand that he hand over any weapons. Luthen pulls out a brown baton-shaped device that looks suspiciously like a lightsaber. The guards seem confused and hand the device back to him.

Later, while attempting to leave the planet where Saw is hiding out, Luthen’s ship is almost captured by a Star Destroyer. In response, he pulls off a series of maneuvers that feel suspiciously like the kind of dogfighting only a Jedi could do. Luthen easily outmaneuvers multiple Tie fighters. He then deploys a laser beam that shoots out of the sides of his ship and looks a bit like lightsaber technology.

The Inverse Analysis — To be clear, this theory still feels pretty farfetched. Like we said, Luthen being a Jedi undercuts the entire premise of Andor and its story of grassroots rebellion. It’s a bit like if Jar-Jar Binks were to show up in the finale and give Cassian Andor a high-five. Fans might love it, but would it make sense thematically?

Andor is streaming now on Disney+.