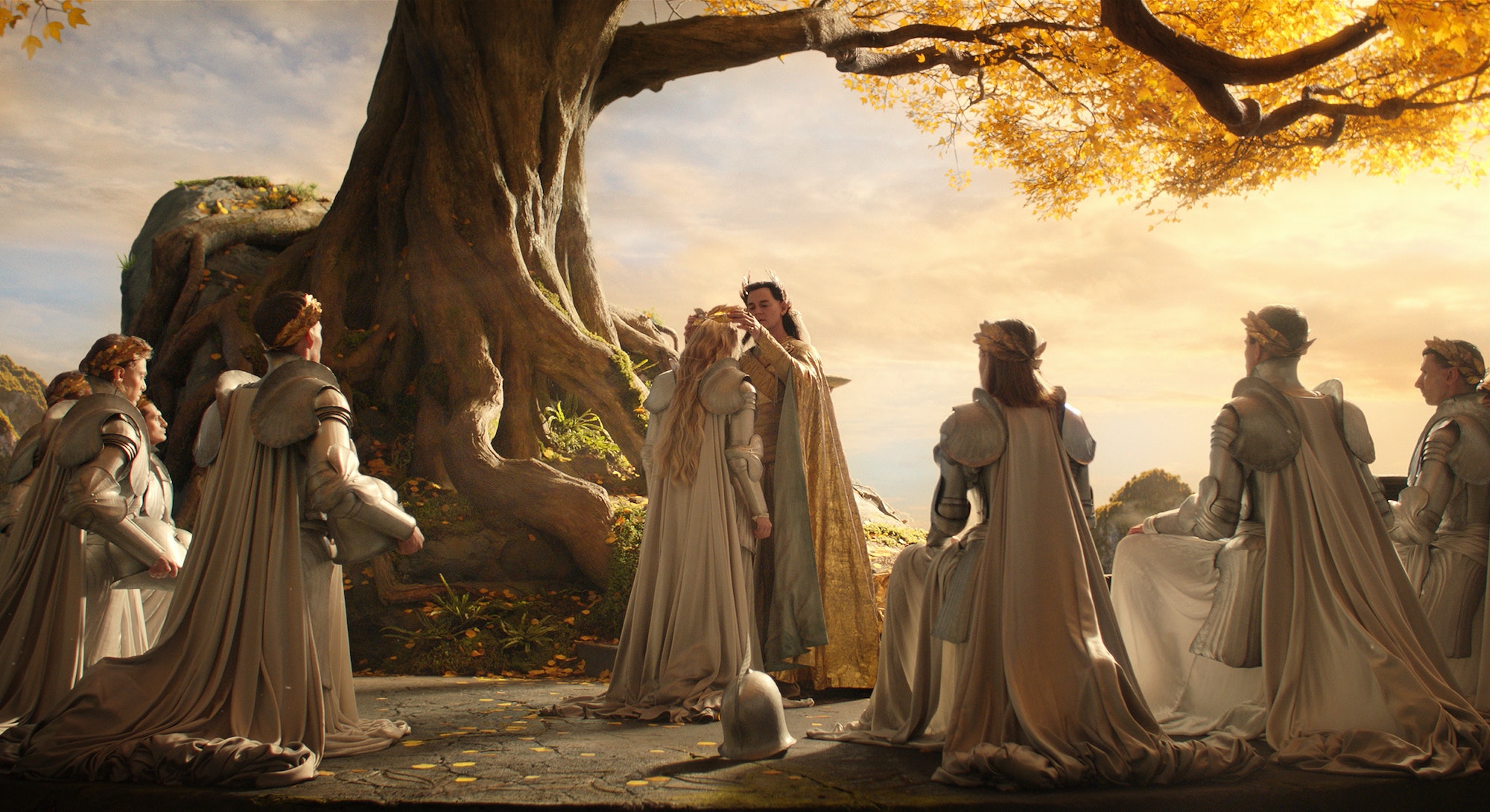 Early reports have claimed that The Lord of the Rings: The Rings of Power may end up being the most expensive TV series ever made. To the show’s credit, it’s easy to see why.

The Rings of Power’s immense production budget is on clear display from the moment it begins. The series’ first two episodes (the only installments Amazon Studios allowed critics to screen early) are brimming with some of the most awe-inspiring images that have ever been brought to life on TV.

From the sumptuous golden lights and leaves that define the Elven kingdom of Lindon to the Earthy shades of gray, green, and blue that comprise the Dwarven realm of Khazad-dûm, the Middle-earth presented in The Rings of Power is strikingly different from the one seen in Peter Jackson’s Lord of the Rings film trilogy. However, it’s a credit to The Rings of Power’s set design and visual effects teams that it feels no less inviting or lived-in.

Even in a post-Game of Thrones world, the Amazon series’ scope and visual beauty defy all expectations of what a television series can accomplish. To put that another way: J.R.R. Tolkien fans need not be worried about Middle-earth feeling small in The Rings of Power.

“A prequel in the truest sense of the word”

What’s less clear after The Rings of Power’s first two installments, though, is whether or not it will ultimately be able to match the narrative elegance of the live-action J.R.R. Tolkien adaptations that have preceded it.

The Lord of the Rings: The Rings of Power is a prequel in the truest sense of the word. The series, which is headed by first-time showrunners Patrick McKay and J.D. Payne, takes place thousands of years before the Lord of the Rings trilogy and is set to explore many of the events that laid the foundation for Frodo Baggins and Samwise Gamgee’s fateful quest. That not only means iconic kingdoms like Gondor and Rohan have yet to be founded when The Rings of Power begins, but characters like Aragorn, Legolas, Merry, Pippin, Frodo, and Sam are also nowhere to be seen in the series.

We still get a few recognizable characters, however. Immortal elves like Galadriel (Morfydd Clark) and Elrond (Robert Aramayo) are very much at the forefront of The Rings of Power, as are several important heroes who are referenced in the Lord of the Rings trilogy, including the Elven High King Gil-galad (Benjamin Walker) and two of Gondor’s future rulers, Isildur (Maxim Baldry) and his father, Elendil (Lloyd Owen).

At the start of The Rings of Power, a number of these characters are still recovering from the cataclysmic conflicts that unfolded at the end of Middle-earth’s First Age. Unfortunately, while many are hoping to leave their days of battle behind when The Rings of Power begins, others suspect that evil still lingers in Middle-earth. In the case of Clark’s Galadriel, a never-ending search for answers has led her to believe that Sauron, the most trusted servant of Middle-earth’s first Dark Lord, is secretly plotting his return.

Anyone familiar with the plot of the Lord of the Rings trilogy will know that Galadriel’s concerns are well-founded. However, both McKay and Payne have previously stated that their primary goal with Season 1 of The Rings of Power is to set up and explore the show’s central heroes. For better or worse, the first two episodes of The Rings of Power suggest that McKay and Payne have followed through on that promise.

“The vibrancy of the show’s color palette helps its locations feel unique.”

On the one hand, The Rings of Power’s unwavering focus on its heroes allows the show to truly spotlight several of its strongest cast members. Clark shines as a version of Galadriel who is more battle-hardened and outwardly headstrong than the older, wiser, and more ethereal iteration Cate Blanchett famously played in Peter Jackson’s movies. Owain Arthur nearly steals the show with his likable, charismatic turn as Durin IV, the dwarven prince of Khazad-dûm.

On the other hand, the lack of a major antagonist in The Rings of Power’s opening installments creates an unfortunate sense of waywardness. At times, the show’s disparate storylines feel like they are only connected by the vague notion that evil may be just around the corner. Consequently, there are moments — especially in The Rings of Power’s second episode — when the series’ continent-spanning structure feels frustratingly unwieldy.

The Rings of Power’s occasional missteps call to mind the moments when Game of Thrones struggled to juggle its various perspectives and subplots. As was the case in that HBO series, some of The Rings of Power’s early storylines are more immediately compelling than others. The show would, for instance, be wise to spend more time focusing on the dwarves of Middle-earth and less on, say, the interactions between a group of nomadic Harfoots (i.e. The Rings of Power’s Hobbits) and a mysterious stranger (Daniel Weyman) who has already become known among Tolkien fans as “Meteor Man.”

Fortunately, while The Rings of Power feels a little narratively uneven right now, the same cannot be said for its aesthetic and impressive visual style. Directed by A Monster Calls filmmaker J.A. Bayona, the first two episodes are as visually stunning as any Hollywood blockbuster in recent memory. The series is so refreshingly bright, colorful, and intricately designed that it’s difficult not to be simply blown away at times by what Bayona and co. have accomplished.

The show’s Elven, Dwarven, and man-made kingdoms all feel distinct and alive, and certain visual motifs help ensure they feel separate from each other despite existing within the same fictional world. Additionally, while a number of sets in The Rings of Power look as if they were designed to be intentionally reminiscent of those featured in Peter Jackson’s Lord of the Rings trilogy, the vibrancy of the show’s color palette helps its locations feel unique to it and its Second Age setting.

The similarities between The Rings of Power and Jackson’s Lord of the Rings films create an interesting visual bond between the projects. After watching The Rings of Power, it’s easy to imagine how the Middle-earth depicted in the Amazon series could eventually transform into the decaying, almost post-apocalyptic world featured in the Jackson films. That’s an undeniable accomplishment, but it’s far from the only impressive feat that The Rings of Power pulls off across its first two episodes.

“Off to a very promising start”

The series is, indeed, off to a very promising start. With a five-season outline already in place, The Rings of Power also has the time and space it needs to fix its few issues. Whether or not it manages to do that remains to be seen, but as every Lord of the Rings fan can attest, few journeys ever get off to a truly perfect start. In the end, what matters is that the journey itself feels worthwhile.

The Lord of the Rings: The Rings of Power premieres Friday, September 2 on Prime Video.