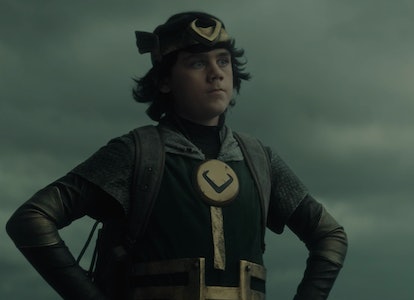 It only takes three words to establish Kid Loki as one of the best new characters in the Marvel Cinematic Universe. In Loki Episode 5, the Disney+ series all-but confirms something we’ve suspected for a while now about the plot of Avengers 5.

Or should we say... Young Avengers?

Warning! Spoilers ahead for Loki Episode 5, “Journey Into Mystery.”

When we first met Kid Loki at the end of Episode 4, it was a lot to take in. Flanked by Classic Loki and Boastful Loki (and holding Alligator Loki), the child-sized version of the God of Mischief seemed like just another variant. But by the end of Episode 5, it’s clear he’s so much more.

Despite his size, Kid Loki is the undisputed leader of this gang of variants. His claim to the literal Loki throne is simple. “I killed Thor,” he says. Among Lokis, it doesn’t get much better.

Later, Kid Loki gifts our Loki (Tom Hiddleston) with a golden dagger, an apparent reference to the flaming sword wielded by Loki in Norse mythology. The fact that Kid Loki doesn’t die at the end of the episode (unlike Classic Loki, R.I.P.) also suggests he could come back in a future chapter of the MCU.

The story of Marvel Phase 4 so far may be the story of the studio carefully assembling the Young Avengers. In the comics, this pint-sized superhero team has included:

Kid Loki has a particularly interesting connection to the group. The team reluctantly accepts his membership — they’re right not to trust him as he wants to steal Wiccan's superpowers. The young Asgardian eventually becomes a full-fledged member of the team but leaves after he is transformed into a young adult.

It’s unclear when exactly the Young Avengers will assemble (there’s still no Avengers 5 release date) or who they might fight — though their comic book origins also connect to the incoming MCU villain Kang the Conquerer. But if Kid Loki is any indication, this upcoming team-up could be just as exciting as the original Avengers.