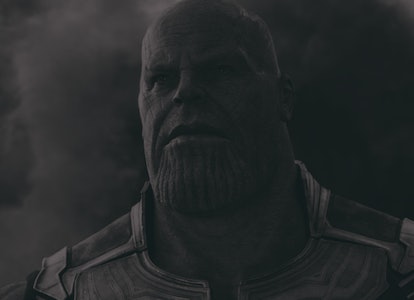 Marvel is living in the past. Ever since Avengers: Endgame, every single story told in this sweeping cinematic universe comes back to the same thing — and Loki is no different.

From Spider-Man dealing with the fallout from the Blip to Loki processing his own death, it all comes back to Thanos. But in Loki Episode 4, Marvel’s newest Disney+ show reveals a surprising way the MCU can get out from under the Mad Titan and try something different.

The answer is counterintuitive, but hear me out: Loki is going to bring back Thanos, but not the one we remember. Confused? Let’s take a few steps back.

Loki and the (Mad) Titan

Loki Episode 4 was filled with twists and turns. There are so many you might have missed arguably the most important moment. This one:

When Mobius lists the various creatures the Time Variance Authority has arrested — “Kree, Titans, vampires” — our first instinct was to think Loki could be setting up Blade. After all, we’re pretty sure this is the first time vampires have ever been mentioned in the MCU. Ever. With Blade in the works, this could be our first breadcrumb that leads Marvel’s most famous vampire.

But what about Titans? Now, to be fair, this could be a reference to lots of different characters, but it feels like a pretty clear reference to the Mad Titan himself: Thanos.

It also makes a lot of sense that the TVA would have already arrested at least one Thanos variant. This is a space god who tracked down all six Infinity Stones (which the TVA has a habit of collecting too) and wiped out half of all life in the universe. It seems likely that at one point or another, Thanos used his powers to deviate off the “sacred timeline” only to attract the TVA’s attention. (Some fans even think Thanos knew about the TVA in Avengers: Endgame.)

So if Thanos variants exist, what does that mean for the MCU? To answer that question, we need to talk about the massive spoiler at the end of Loki Episode 4.

Thanos variants in the MCU?

Loki Episode 4 ends with the reveal that a whole bunch of banished Loki variants are hiding out in some sort of apocalyptic timeline. It’s a pretty wacky bunch, including Richard E. Grant’s “Classic Loki” and even what appears to be a “Crocodile Loki.”

So it stands to reason that if the TVA has also been arresting Thanos variants, there could be some very weird ones hanging around — maybe in the very same timeline where now finds himself. And if that’s the case, we could meet some very weird versions of Thanos very soon.

Imagine a scene in Loki featuring “Kid Thanos” or even “Penguin Thanos.” That would definitely be enough to undercut whatever remaining mystique the Mad Titan still has in the MCU. Sure, it would be hilarious, but it would also free Marvel to finally move beyond the character and start something completely new.