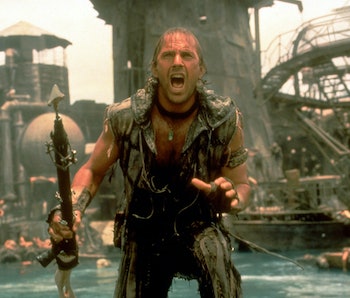 How does a movie “fail,” anyhow? At what point do all the factors of filmmaking — like budget, vision, execution, and public interest — give way to the more subjective idea of merit?

Even if it’s poorly reviewed, does a movie “fail” if it leaves behind a legacy? Can a movie really be a “failure” if it’s still entertaining and more engrossing today than it was when it was first released?

In 1995, Kevin Costner was Hollywood’s crown prince, ruling the late ‘80s and ‘90s. His starring role in Field of Dreams, a sentimental celebration of not simply baseball but American tradition, cast in amber his image as the ultimate movie dad.

By the next year, Costner was on top of the film industry as the director and star of Dances With Wolves, which earned him two Oscars. A string of escapist blockbusters and adult thrillers followed: Robin Hood: Prince of Thieves and JFK, both in 1991, and The Bodyguard — responsible for many karaoke nights thanks to the might of Whitney Houston — in 1992.

But by 1995, the wind had shifted direction. That year, Costner starred in the science-fiction action film Waterworld, a movie that wasn’t bad but so ludicrously expensive that its modest box office haul disrupted Costner’s momentum. While it’s unfair to say the film ruined Costner’s career — the man kept working and still works today, as the producer and star of the mega-popular Paramount series Yellowstone — Waterworld is often held up as a cautionary tale of what happens when a movie with too much money asks too much of its star. At some point, the tide will turn.

And yet, Waterworld is the movie you need to stream on Netflix before it leaves on November 30. Grab a plate of leftovers from Thanksgiving and hit play. Here’s why.

In 2021, perhaps we’re still being unfair to Waterworld. Despite wooden acting from almost everyone, Costner included, Waterworld is relentlessly imaginative and fun as you’d expect a half-Mad Max, half-swashbuckler epic with the narrative DNA of a gritty Western to be. Its tactile filmmaking emphasizes practical effects and death-defying stunts over CGI, which has allowed the film to age like fine wine. And as for Costner — always seen in the archetype of a good, wholesome everyman American (even in places like Sherwood Forest) — Waterworld has Costner fill the stolen boots of an antiheroic asshole type he’d later play to greater acclaim in Yellowstone.

In Waterworld, from director Kevin Reynolds (he maintains that credit but actually quit the film over heated battles with Costner) and co-written by Peter Rader and David Twohy, the film depicts a post-apocalyptic future in which climate change has fully melted the polar ice caps. Almost all of Earth is submerged, leaving the remnants of civilization to scavenge for scraps on the high seas. Only a daring few are capable of setting sail on their own.

Costner stars as the nameless “Mariner,” a loner who survives by his grit and his wit. An opening close-up between his legs, peeing in a jar, is a rough note to start on, but the heroic framing succeeds in making sure you know this guy is our way into this strange new world. It’s later revealed the Mariner is a “muto,” or a mutant — a rare breed of people whose gills and webbed feet indicate humans are starting to evolve to survive their new environment.

When the Mariner escapes an atoll — tiny, floating villages — during a violent raid, he brings along with him Helen (Jeanne Tripplehorn), a barmaid who serves fresh water, and Enola (a young Tina Majorino), an artistic girl with a strange tattoo on her back. The three venture off to find the mythical “Dryland,” a vestige of solid ground somewhere in the endless ocean. They do so while racing against the fearsome pirate leader Deacon (Dennis Hopper), a functional villain who conveniently brings stakes and urgency to the screenplay.

While critics at the time dismissed Waterworld as an oceanic Mad Max rip-off, today that influence comes off as more inspired than it does imitative. Waterworld fully tells its own story with its own textured world, leaping forward thanks to big and small ideas. The spectacular action setpieces that illustrate more color and feel more dangerous than today’s green-screen superhero movies are a sweet bonus.

World-building enthusiasts will be enamored by Waterworld. With its simple premise of a flooded Earth, the film reveals new ways of life for its characters that feel alien (and horrifying) to us, landlubbers still blessed to live on soil.

Take for example “Portugreek,” the language of traders. Or the atoll, where a father offers Mariner his daughter because his seed can ensure genetic diversity — and a stronger, healthier baby — that inbreeding cannot. At Deacon’s base of operations, running on a dwindling supply of oil, cigarettes are a currency, much like in prisons. The rarity of mutants like Mariner nods to a macro sense of deep time. This is the beginning of man’s next phase, adapting to the planet through the ancient process of evolution.

Waterworld is full of narrative imagination, and it deserves more credit. The film makes weird but logical deductions from its central idea, taking it further than what immediately meets the eye. It’s the little things that make a difference in this dystopia.

On top of that, Waterworld has legitimately awesome stunts and a sweeping sense of theme-park spectacle. The editing makes things occasionally incoherent but the sheer determination by the stuntmen to just go for it is key to Waterworld’s appeal. (Unsurprising, but no less amusing, that this “bomb” spawned a long-lasting attraction at Universal’s theme parks.)

It’s unfortunate Waterworld is best remembered as a “failure” rather than for its artistic strengths. Waterworld wasn’t the first major box-office bomb in Hollywood, but it was one of the few to struggle visibly. Indeed, the film was notorious before it was released over the many problems that plagued it. (Including, notably, a hurricane that ruined the expensive set.)

The costs added overtime, and Waterworld was known around the industry for its eye-watering price tag (an estimated $175 million, or $317 million adjusted for inflation), which meant even in the best of cases, Waterworld was doomed to sink. And that’s what happened. Despite opening at number one and grossing $264 million worldwide (plus more revenue from home video and broadcast airings), the film was deemed a disappointment.

Is Waterworld a failure, though? It marked the beginning of a downturn for Costner as a Hollywood leading man, before he finally zeroed in on network TV stardom. It raked in millions, but the costs involved proved difficult to justify. Perhaps a binary understanding of success and failure is inefficient to gauge a weird but ambitious movie like Waterworld. The best we can say is that it made a hell of a splash, even if its ripple effects were lost to sea.

Waterworld is streaming now on Netflix until November 30.