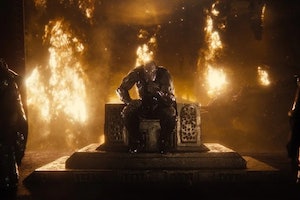 'Justice League': The only 5 Snyder Cut scenes you actually need to watch

It’s been a little over a week since the Snyder Cut debuted on HBO Max, so if you haven’t watched it yet there’s a decent chance it’s because you’re intimidated by that four-hour watch time. The truth is that while Zack Snyder’s Justice League is a decent watch (as long as your spread it over two or three days), there are only a handful of scenes in the Snyder Cut that are really worth watching.

If you don’t have time to watch the full Snyder Cut, but you still want to experience the best of the Justice League director’s cut, here are five scenes that are actually worth checking out. Here’s my extremely subjective list, presented in chronological order.

We saw similar version of this scene in the 2017 Justice League — but with Steppenwolf in Darkseid’s place. The Snyder version is also at least a minute longer and a lot cooler thanks to the director’s recognizable action style.

This scene got cut entirely from Joss Whedon’s Justice League, and it’s pretty great. We meet Ezra Miller’s take on Barry Allen, and get to see his powers in action when he rescues Iris West (Kiersey Clemons) from a car crash. I won’t spoil anything beyond that because this really is a fantastic moment.

If you’re excited for the upcoming Flash movie, do yourself a favor and watch this scene (even if it’s the only part of the Snyder cut you watch).

Another great scene that was cut entirely from the 2017 movie. Zack Snyder restores his vision for Cyborg (which is a good thing since we’re probably never going to get see this version of Cybor in a movie ever again).

Again, no spoilers, but Cyborg was clearly meant to be the heart of Justice League, and it’s great to see Zack Snyder restore that vision. Watch it for yourself, and then read this explainer from Inverse’s Eric Francisco.

We just skipped a lot of the movie, but honestly, you’re not missing much. Once the Justice League unite, nothing that interesting happens until they decide to bring Superman back to life. But when he comes back, he intially doesn’t remember any of the other heroes, leading to an all-out superhero brawl.

This is another scene that was also in the original 2017 film, but it’s longer, better edited, and more exciting here.

You’ve probably already heard about this one. Zack Snyder brought back a bunch of the original cast to film this epilogue, which imagines a dytopian future where Superman is evil, Darkseid’s destroyed the Earth, and Batman is forced to team up with... the Joker!

This is reportedly the only actual new footage in the Snyder Cut, and it seems to mostly function as a teaser for the Justice League sequel Zack Snyder eventually wanted to make (he apparently had an entire trilogy planned out once upon a time). Sadly, it’s probably all we’ll ever get.

Still enjoying the Snyder Cut? Rewind a bit and rewatch the big climactic battle between the Justice League and Steppenwolf. Zack Snyder’s version is a lot better, mostly thanks to the addition of Darkseid (sort of) and the removal of that random Russian family.

To be honest, this big battle still isn’t great, but it’s noticably better thanks to Snyder’s edits. So at this point you might as well watch it, right?

The Snyder Cut is streaming now on HBO Max.

More like this
Entertainment
8.4.2022 4:14 PM
53 sci-fi and DC shows and movies on HBO Max you need to watch ASAP
By Jake Kleinman, Eric Francisco and Ryan Britt
Entertainment
8.4.2022 10:30 AM
Batgirl’s cancellation is bad for all superhero movies — here’s why
By Dais Johnston
Culture
8.8.2022 11:30 AM
You need to watch the most underrated time-travel thriller on HBO Max ASAP
By Dais Johnston
Related Tags
Share: