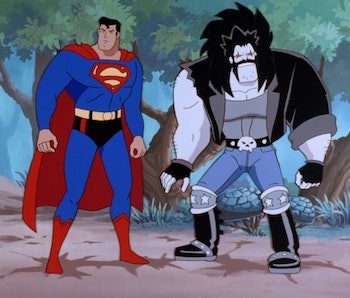 Jason Momoa has a firm place in the DC Universe as a rugged Aquaman. But if you ask him, there’s another DC character he wants to play. Last week, DC fandom began buzzing when the actor revealed that his dream superhero project might be in the works at Warner Bros. Discovery.

When interviewed by ET Canada to promote Slumberland, Momoa had positive comments about Peter Safran and James Gunn ascending to the highest echelons of the newly-formed DC Studios.

“There's a lot of cool things that are going to be coming up, and one of my dreams come true will be happening under their watch, so stay tuned,” Momoa said.

Days later, Momoa gave Comic Book Resources a hint that the project may be a Lobo movie. “It's definitely something I've collected my whole life,” Momoa said. “So, all the fans who know me will know that I collect this comic book the most.”

Long before Momoa was cast as Aquaman in 2014, he talked up Lobo at an Evolution Expo appearance. According to MovieWeb, Momoa said at a panel:

"I think it would be really, really fun to play a superhero. You know? I've always talked about, like, what's your favorite. I mean I love Lobo, so ... It would be awesome.”

To understand why Jason Momoa loves Lobo, and why fans are on board with the idea despite Momoa already playing a Justice League mainstay, a little explanation is in order. First, here’s Jason Momoa:

Who is Lobo? — Created in 1983 by Roger Slifer and Keith Giffen, Lobo is an alien bounty hunter who takes on jobs across the galaxy. He first appeared in the DC series Omega Men, with a different look and personality than he’d later show.

In his original iteration, Lobo still sported his ghostly white skin, purple hair, and bloodshot red eyes. But his physique was lean, even for a comic book character, and his costume was an orange and blue spandex unitard. His signature motorcycle also looked like a sci-fi hoverbike stolen from Flash Gordon’s garage rather than the bulky Harley Davidson hog it is now.

After his debut, Lobo became a regular character in the DC Comics series L.E.G.I.O.N.. During the series, Lobo grew to be less “gothic Ziggy Stardust” and more like a belligerent biker gang leader. He ditched the spandex for leather jackets, fingerless gloves, longer hair, a cigar that never seems to go out, and a brawnier physique. His personality was also given machismo, with Lobo now referring to himself as The Main Man.

As a character, Lobo relishes mindless violence, but he does have some semblance of a moral code. Mostly, he prioritizes his word. If Lobo makes a promise, he keeps it, though he won’t do anything more or less than what he agrees to.

During L.E.G.I.O.N., writer Keith Giffen used Lobo to satirize the prevalence of over-the-top antiheroes in comic books during the late ’80s and ’90s, best epitomized in characters like Deadpool, Spawn, and Frank Miller’s Batman. Ironically, this would make Lobo incredibly popular.

In a 2006 interview with Newsarama, Giffen looked back on writing Lobo, saying, “I have no idea why Lobo took off. I came up with him as an indictment of the Punisher, Wolverine, bad ass hero prototype, and somehow he caught on as the high violence poster boy. Go figure.”

Jason Momoa carries himself with Lobo-esque vibes, which explains why his theoretical casting makes sense. But it’s perhaps the weirdness of Lobo that's most appealing. On paper, he’s a mindless killer with a blunt sense of humor, but his comic books take him everywhere from intergalactic game shows to a hit on Santa Claus (he’s hired by the Easter Bunny). Nothing is off the table, making the prospect of a Lobo movie compelling.

Lobo is also an enemy of Superman, which might explain Momoa’s excitement. With Justice League co-star Henry Cavill playing Superman again, Momoa is probably champing at the bit to appear opposite Cavill as a character he feels more naturally attuned to than Arthur Curry.

The Inverse Analysis — If and when a Lobo project is announced, and Momoa is involved, it will be interesting to see how DC gets around the fact that he’s already the face of its billion-dollar Aquaman franchise. The multiverse could provide an answer, but that feels a bit cheap for someone like Lobo. The Main Man deserves better, and the combined might of James Gunn and Peter Safran could provide him with a compelling bounty.