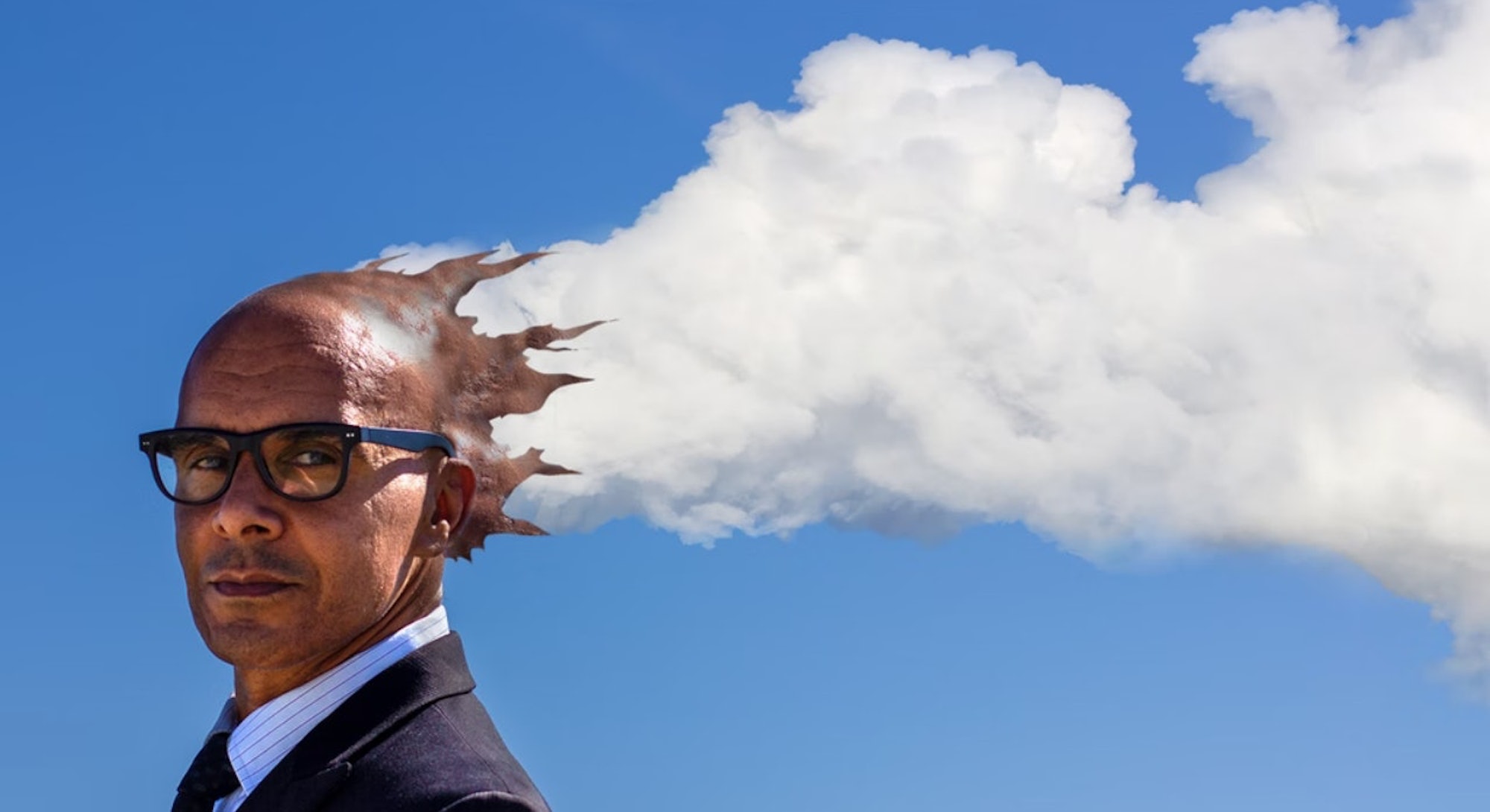 Coherence is more popular than James Ward Byrkit could have predicted.

Almost a decade after making his feature directorial debut with the mind-bending science-fiction miniature, the acclaimed writer-director is readying its follow-up in the form of independent anthology series Shatter Belt. He’s also still processing the surprise staying power of his no-budget breakout, a metaphysical mystery-thriller about guests at a dinner party whose realities fracture as a comet passes overhead.

“One of the greatest satisfactions about Coherence came from our mission that people would want to watch it over and over,” Byrkit tells Inverse, speaking from his Eagle Rock residence, 10 minutes from where he shot the film back in 2012. “I still hear from people every day that that’s exactly what they’re doing because something about it is watchable and satisfying on that level.”

Coherence grossed over $100,000 — twice what Byrkit spent on it — after first hitting U.S. theaters in 2014. It also received critical acclaim, with particular praise levied at Byrkit’s naturalistic shooting style and heady use of quantum-physics concepts like Schrödinger's cat and the many-worlds interpretation.

At the time, Byrkit was largely pleased with the response, especially given that he’d shot the film in five days with friends. What has most impressed him about the experience is the enthusiasm with which international audiences continue to champion Coherence in more recent years.

Five months ago, one of Byrkit’s friends advised him to look at Douban, a social networking service on which tens of millions of Chinese users review films and form online communities. There, listed among the service’s top-rated 250 movies of all time — alongside The Shawshank Redemption, Titanic, and Spirited Away — was Coherence. (It’s currently #228, just below The Matrix Reloaded.)

“I was gobsmacked by that,” recalls Byrkit. “To know that the film has penetrated at least the youth culture there is really fascinating.”

Four years ago, Byrkit traveled to China to promote Coherence. He knew it had been well-received there, but he had not quite realized the degree to which his film was capturing the interest of Chinese audiences.

“The young people of China speak English now, which has opened the door to these new genres, including science-fiction,” he says. “This flood of new awareness has come in, now that young people in their twenties can watch movies in English and appreciate them on a new level.”

Though fantasy has been a long-established film genre in China, science fiction has historically been less popular — but movies like Byrkit’s are changing that. “Somehow, Coherence hit exactly the sweet spot of what they’re fascinated by,” he says. “A lot of it is about parallel worlds and choices. And something about the dinner party of it all just landed perfectly with 200 million people in China.”

Byrkit has many theories about why this might be the case, but he’s currently more focused on making lightning strike twice. With Shatter Belt, Byrkit has returned to the indie filmmaking fold after years spent toiling in Hollywood. Though exciting projects crossed his desk during that time — including a planned Primer series — nothing had come together with Coherence’s can-do spirit.

Funded through Kickstarter as a means of reclaiming the same independent filmmaking spirit that fueled Coherence, Shatter Belt is billed as a series of short film episodes, all based around themes of consciousness. Three of the first season’s self-contained installments have been shot, with Byrkit now in production on the fourth and final.

“Some of the episodes are very metaphysical, and some of them are a little more classical science fiction,” he explains. “I’m trying to keep them grounded in an entertaining pulp aspect that allows a broad audience to appreciate them, as well as the super nerds who just want to geek out about these deeper ideas about how the universe is constructed.”

Shatter Belt’s first episode, “The Hard Problem of Carl,” explores artificial intelligence, following a woman who works as a “contact tracer” for AI. Responding to a call, she discovers a man apparently captured by the emerging AI of his smart refrigerator. As this strange situation becomes more dangerous, she’s drawn into the depths of questions concerning the nature of awareness. Coherence’s Emily Baldoni and Hugo Armstrong star in key roles.

“Immotus,” the second episode, entertains the possibility that its characters — all employees at an Internet startup company — live in a simulated universe; its ensemble cast includes J.J. Nolan, Julie Zhan, and Coherence alum Maury Sterling.

“People discover, in a way, a glitch in the matrix,” Byrkit explains. “They find this apple that can’t be touched. And people start theorizing as to whether this is proof that we’re in a constructed world because there is no physical reason why it should be. There’s no forcefield, no nothing. But every time someone is about to touch the apple, they change their mind. It becomes about intention and will. Is this mass hypnosis, or is it an actual crack in the code?”

Actor-comedian Patton Oswalt stars in Shatter Belt’s third episode, “The Specimen,” about a man trying to rebuild his life by trading one treasured collectible for another, aiming to recover his laptop so he can finish an article that will finally lead to a payout. Meanwhile, across town, the bones of an ancient king are analyzed and cataloged. The two narratives intersect, creating what Byrkit teases as a cosmic love story.

“It has an element of questioning how conscious messages are transferred and received and how they last through time,” he adds.

“Coherence is basically a long-form version of a Shatter Belt story.”

Where Shatter Belt’s future stories are concerned, Byrkit isn’t closing any doors. A second season might include longer-form installments told in three parts.

“Coherence is basically a long-form version of a Shatter Belt story,” he notes. “It’s told in a unique way, with a different kind of storytelling and production, breaking a lot of rules along the way but in doing so touching something uncanny.”

In conceptualizing the series, Byrkit has drawn upon a decade’s worth of ideas — compelling, cosmically minded concepts — that he struggled to get made in Hollywood once the initial rush of post-Coherence pitch meetings had subsided.

“When you go the traditional Hollywood route, people are not used to working as quickly or decisively as I am,” he reflects. “That leads to frustration and wasted time, to great projects that were just about to happen before random events derailed it.”

This fate befell Byrkit around 15 separate times in the years after Coherence, he estimates. One such project that still pains him to discuss was a planned small-screen extension of Primer, a 2004 science-fiction cult film that earned broad acclaim for its complex plot structure and jargon-heavy treatment of time travel.

“It would have touched the whole world.”

“What I can tell you is that it was a television series that was everything I love about science fiction,” says Byrkit. “I always had a soft spot for figuring out logical rules for time travel. And so I spent two and a half years working with David S. Goyer, figuring out how to bring logical time travel rules to a series based on Primer.”

For a time, it seemed like the series would happen. “It was so exciting and so satisfying to see it all hold together,” he recalls. “And to see stories that emerged that were emotional and complicated, from multiple points of view yet retaining the same intense, independent spirit that Primer had.”

But the series never came to fruition. Byrkit doesn’t go into details, though it’s clear the experience left a mark. “It was really heartbreaking to see the events that led to its implosion, but all I can say is it had really beautiful energy behind it,” he said. “And it would have touched the whole world.”

Recovering from that setback took time. “The lesson I had to learn over and over,” he says, “is that there’s no way to get something as ambitious as I’m imagining off the ground unless I am doing it unimpeded, with no baggage, with nothing that can block it. I had to learn that in at least 15 heartbreaking ways, not just on Primer.”

Willing it into existence

Byrkit has seen his fair share of success in Hollywood, most notably serving as a conceptual artist on Gore Verbinski’s first three Pirates of the Caribbean films and co-writing the script for Rango, Verbinski’s Oscar-winning acid-Western cartoon. But he sees Shatter Belt as an overdue return to the stripped-down, self-starting creative ethos that governed his breakthrough feature.

“With Coherence, I had an idea, then I had friends who came over to make a movie,” he says. “There were no other layers involved. In Hollywood, there’s 50 layers of extra people that don’t need to be part of it. Shatter Belt kicked off last year when I realized I don’t need to keep going to meetings. I have a camera. I have ideas. I have scripts. I have people I can call, literally right now. And we can start shooting in five minutes. And that’s what we did.”

As Byrkit zeroes in on his initial goal of completing a four-episode first season of Shatter Belt, he’s been focused on production but looks forward to shopping the series around.

“The dream right now is that a streamer will fall in love with it and want multiple seasons,” he says, though the advance interest from international territories could see him focus on independently building out the series’ global distribution strategy.

“Right now, it’s just about the theory that if you build it, they will come,” he says. “If you build it in a way that’s absolutely unique, you’re going to get an absolutely unique response from the audience. The reason we’re so sure about doing an entire season, and we're so sure that it can be something, is from the year that I traveled the film festival circuit with Coherence. I realized there was this huge audience out there that was starved for good science-fiction.”

What makes Shatter Belt so unique?

In this, Byrkit senses a symmetry with the science-fiction concepts at play in Shatter Belt.

“Every story is about this weird boundary between consciousness and the physical world, which is baffling to scientists,” he says. None have been able to solve “the hard problem of consciousness,” which asks why physical processes in the brain give rise to subjective experiences in the mind.

“There is no satisfactory explanation for how our abstract thoughts, which have no physical weight or mass to them at all, affect the physical world,” adds Byrkit. “How is that possible? We can’t answer that yet. Everything about Shatter Belt is driven by that question — and driven by my passion for filmmaking.”