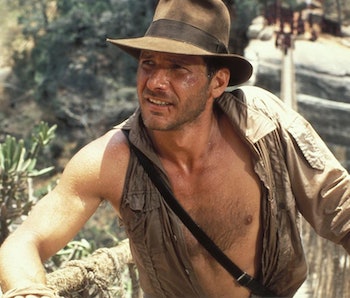 Indiana Jones is unique for its long life but sporadic release schedule. Now, 40 years after the first film, Harrison Ford is putting on the fedora for a final time. The still-untitled Indiana Jones 5 is now in post-production and slated for a 2023 release. Few details have been released, but a first glimpse reveals that the movie is returning to where the franchise began.

Empire reported that the upcoming movie will be set in 1969 and pit Indy against his old foe: Nazis. This time, they won’t be trudging through Egypt, but will be right at home in America. Indiana Jones 5 is going to cover the space race, which involved Nazi scientists who were snapped up and sent to NASA in the wake of Germany’s defeat. The villain (Mads Mikkelsen) is based on Wernher von Braun, who helped develop the Nazi’s V2 rocket before becoming a key contributor to the Apollo program.

Like other Indiana Jones stories, this one is focused on the search for an artifact, although the precise goal isn’t clear yet. If this movie follows in the footsteps of another Indiana Jones trope, the Nazi connection may only be tangential.

The first three Indiana Jones movies centered around religious artifacts. First there was the Ark of the Covenant, then the Sankara stones, and then the Holy Grail. 1969, the famous Summer of Love, might continue that trend by moving into new age spiritualism. NASA’s Jet Propulsion Laboratory has an odd spiritual history thanks to Jack Parsons, an engineer crucial to the lab’s founding. Parsons was interested in the occult, and hung out with L. Ron Hubbard.

While Werner von Braun and the role Nazi scientists played in the Space Race fits the Indiana Jones model, Jones 5 could also bring back the religious motifs that Crystal Skull avoided. Together, they could close out the franchise with the God-fearing, Nazi-punching elements that made it so great in the first place.