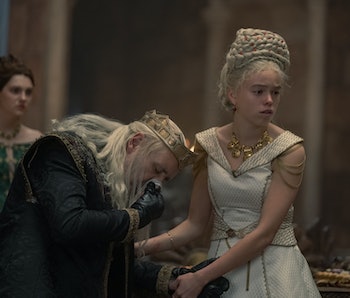 Could an innocent old man in grey robes be behind the downfall of the House of the Dragon?

The Grand Maester conspiracy theory is a long-running hypothesis among Song of Ice and Fire readers and Game of Thrones viewers. The theory claims that the supposedly impartial Maesters have shown their true colors throughout the franchise, opting to take sides to advance their own agenda.

Now, House of the Dragon fan are revisiting this theory in light of Grand Maester Mellos (David Horovitch) failing to cure the ailing King Viserys I Targaryen (Paddy Considine).

What is the Grand Maester conspiracy theory?

The Maesters are scholars who advise the lords of the Seven Kingdoms on all matters scientific, medical, and historical. While ostensibly neutral, the Maesters dream of turning their world of occult magic and superstition into a world of reason. While Maester Pycelle (Julian Glover) admitted fealty toward House Lannister rather than the realm in Game of Thrones, Grand Maester theorists point to a specific passage in A Feast for Crows as definitive proof that the Maesters are choreographing war and peace behind the scenes.

“Marywn smiled a ghastly smile, the juice of the sourleaf running red between his teeth. ‘Who do you think killed all the dragons the last time around? Gallant dragonslayers armed with swords?’ He spat. ‘The world the Citadel is building has no place in it for sorcery or prophecy or glass candles, much less for dragons. Ask yourself why Aemon Targaryen was allowed to waste his life upon the Wall, when by rights he should have been raised to archmaester. His blood was why. He could not be trusted. No more than I can.’”

Musician and Thrones superfan Akeda Keyz argued in a TikTok that if the Grand Maesters are pulling the strings in Westeros, then they’ve likely been conspiring against House Targaryen since the Targaryen dynasty began. What noble house poses a greater threat to the Citadel’s primary ambition of building a world based on reason than the Targaryens, who are firm believers in dragons and prophecies? The Targaryens believe their abilities make them closer to gods than men, and their faith in their supposed exceptionalism led to arrogance, inbreeding, paranoia, and pyromania, which can set their dynasty — and the realm — in flames.

How is the Citadel conspiring against House Targaryen?

The current victim of the Maesters’ political machinations is King Viserys I Targaryen. Keyz notes that Grand Maester Mellos is adamant that Viserys continue to be treated for his illness (leprosy, according to an Entertainment Weekly podcast) with excessive leeching, even though that treatment is obviously not working.

Keyz concludes that Viserys is being left to die to ignite chaos in King’s Landing. The death of Viserys would lead to the dominos of the Targaryen dynasty (and their dragons) falling, starting with bloody warfare between siblings Princess Rhaenyra and Prince Aegon II. Keyz also mentions that House Hightower funds the Citadel, as the Citadel stands in their ancestral home of Oldtown. Mellos, like Maester Pycelle, may have forgone neutrality in favor of supporting the Hightowers.

The books further hint at the maesters plotting against the Targaryens. In A Dance with Dragons, Barbrey Dustin (who never appears on television) claims the maesters orchestrated Robert Baratheon’s Rebellion, which led to the apparent destruction of House Targaryen. Rickard Stark’s maester, according to the claim, suggested marriages between the Starks, Baratheons, Tullys, and Arryns, undermining the Targaryen bloodline and leading to the Robert Baratheon/Lyanna Stark/Rhaegar Targaryen love triangle that culminated in Robert’s Rebellion.

The Inverse Analysis — The Grand Maester conspiracy theory has always been compelling. The concept of well-read men lurking in the background being the puppeteers of all of the messiness that has gone down in the Seven Kingdoms for centuries aligns with George R.R. Martin’s favorite themes of moral ambiguity and the lust for power. We’ll have to see in the weeks ahead whether this conspiracy theory will hold its weight throughout House of the Dragon.

House of the Dragon Episode 6 airs September 25 on HBO.