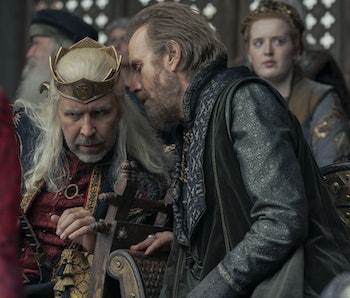 And if you haven’t noticed so far, the Hightowers are not a House that lets go of power easily. They always opt to keep their friends close, and their enemies wed. Viserys’ father-in-law’s expulsion from the Red Keep can only mean more drama and deceit in King’s Landing, despite Princess Rhaenyra’s wish for stability.

Why does Otto Hightower get the boot?

The climax of House of the Dragon Episode 4, “King of the Narrow Sea,” sees Rhaenyra and her uncle, Prince Daemon Targaryen, kiss, then follows the aftermath of Daemon’s (Matt Smith) failed attempt at incestuous intercourse with his niece.

Unknown to Rhaenyra and Daemon, they’re being followed around town by Mysaria’s child spies. Mysaria (Sonoya Mizuno), in turn, is feeding information to whoever in the Red Keep will pay well for it. When one spy sees Daemon shamefully stumbling out of the brothel, and Rhaenyra following close behind, he runs to tell Mysariathat the two slept together — a fair assumption, but an inaccurate one.

Though the Targaryens are unusually chill about interbreeding given their obsession with keeping their dragonlord bloodline “pure,” Otto knew that Viserys would not only find Daemon to be a reprehensible husband for his beloved daughter, but also that Viserys would be aghast if questions about Rhaenyra’s “maidenhood” somehow affected her seat on the Iron Throne. Exhilarated by the information he receives from Mysaria, he informs Viserys, who explodes.

Alicent overhears and confronts Rhaenyra, expressing both concern and simmering rage, and Rhaenyra’s reaction leads to a bitter and dangerous chain of events. Rhaenyra accuses Otto of lying, while simultaneously lying to Alicent about who she lost her virginity to and the state of her relationship with Daemon. Believing his daughter, Viserys strips Otto of his title, a decision that makes his wife detest both him and Rhaenyra.

Will Otto Hightower come back?

It should be noted that, in the Song of Ice and Fire prequel novellas, Otto loses his position as Hand of the King for a different reason than he does in House of the Dragon.

In the books, Otto is removed because he keeps asking the king to declare Viserys’ son with Alicent the rightful heir to the Iron Throne, which would boot Rhaenyra from the running. His expulsion fuels growing support for Alicent and her line. When he’s eventually reinstated as Hand of the King following the suspicious demise of his replacement, Lord Lyonel Strong, it’s not immediately seen as a huge development, because he only lost the job for being a pest.

However, Otto’s “humble” return to the Red Keep masks sinister intentions: No one will get in the way of the Hightowers again. He’s one of the puppeteers behind Alicent and Aegon II Targaryen’s ambitions, brainwashing them both into believing that not snatching the Iron Throne from Princess Rhaenyra would lead to their execution as potential threats to her rule.

When Viserys dies, Otto betrays his king’s wishes. Viserys’ body is hidden, Rhaenyra isn’t notified of her father’s passing, and the public is kept in the dark for several days. These decisions give Otto time to get a crown on his grandson’s head.

Otto succeeds, but his backstabbing is never forgiven. After Rhaenyra seizes King’s Landing back from her half-brother, Otto gets what he deserves.

The Inverse Analysis— Will Otto Hightower make his way back into King Viserys’ good graces in House of the Dragon? We’re inclined to think he will. As much as Game of Thrones is about prophecy and supernatural powers and shocking twists, it’s also about the familial and political intrigue required to grasp the coveted Iron Throne. House of the Dragon will almost certainly show Viserys getting fooled by an old friend with huge ambitions.

House of the Dragon Episode 5 airs September 18 on HBO.