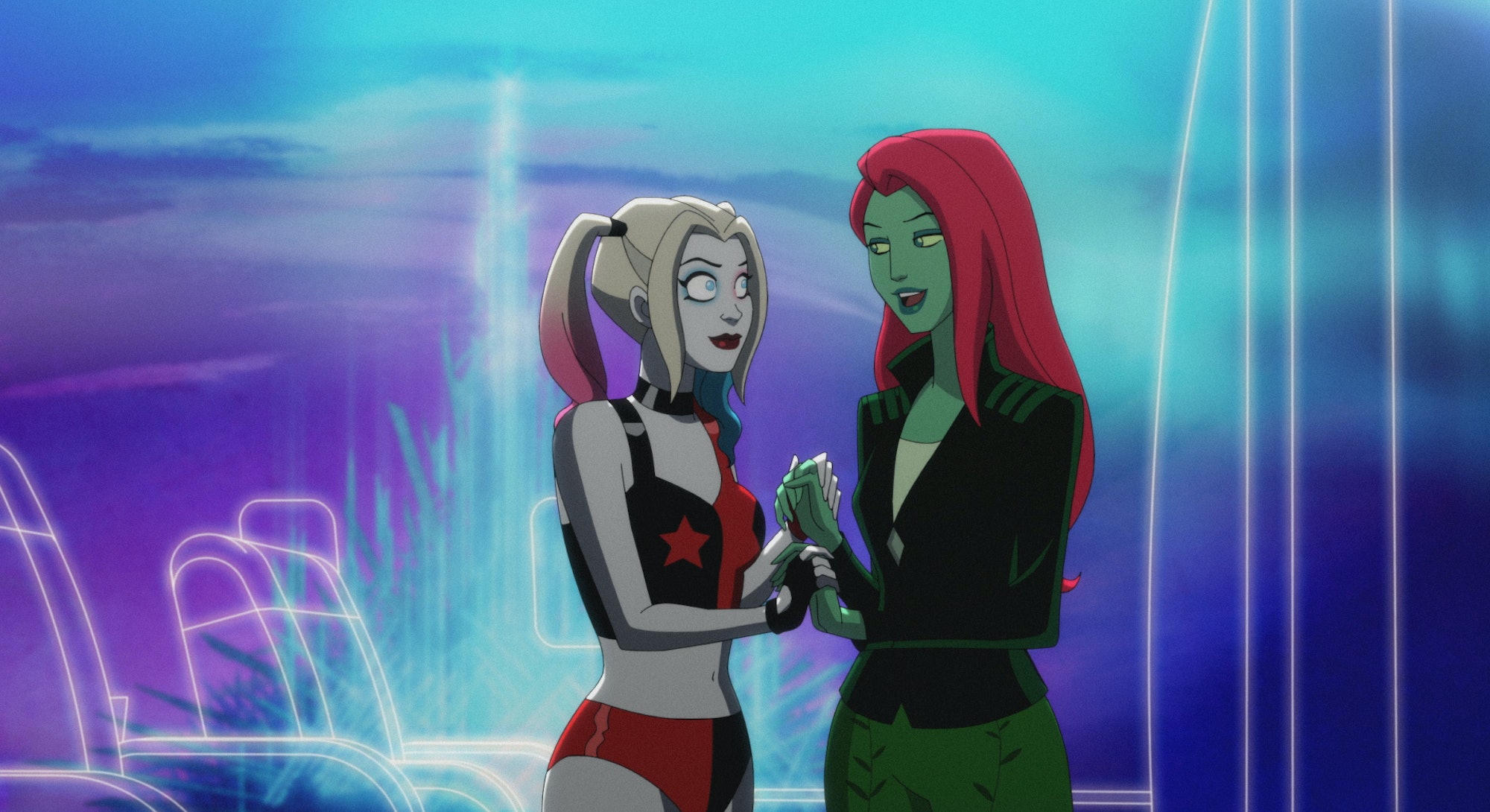 HBO Max may be a threat to the irreverent Harley Quinn, given the recent cancellation of Batgirl.

But as far as Harley’s concerned, all that matters is her relationship with her best friend turned girlfriend, Poison Ivy.

At the end of Harley Quinn Season 2, which released on the now defunct DC Universe app mere weeks into the Covid-19 pandemic, Harley Quinn (Kaley Cuoco) finally got together with her crush, redhead fatale Poison Ivy (Lake Bell).

As the two drove into the sunset, it was unknown what would become of Harley’s breakout series, which was the wildest, smartest, and best adaptation of a DC character in ages. But after a two-year hiatus and a move to HBO Max, Harley Quinn is back for its third season.

Harley Quinn is still wild, smart, and great. The series continues with Harley and Ivy learning to love each other, while those in the periphery — like beleaguered bad guy Bane (James Adomian) and hot-tempered Jim Gordon (Christopher Meloni) — start to come into their own.

That doesn’t mean Harley Quinn will be nothing but romantic walks in the park. “The challenge is, how do we create organic drama between the two of them that’s never going to be so dire it actually ruins their relationship?” Schumacker says.

Schumacker and Halpern spoke to Inverse about how Harley and Ivy will navigate their new relationship, what characters have newfound prominence in this cartoonish corner of Gotham City, and why Bane is referencing Sex and the City.

Inverse: No relationship is happily ever after. What friction will Harley Quinn and Poison Ivy have in Season 3?

Justin Halpern: The big thing we always talked about was, how do you operate in a good relationship when you’ve only been in bad ones? What habits do you take to new relationships? Harley's only ever been what Joker wanted. Her wants were whatever Joker wanted. Now she’s back in a relationship, and she’s starting to ask herself, “Do I put everything into what my partner wants? Do I put in what I want?”

“We’re going to find she’s having trouble figuring out how to be in this relationship. ‘How do I make it work?’”

Patrick Schumacker: We end the premiere with Poison Ivy’s name in neon under Harley’s in the title. The show’s not changing its title, it’s still Harley Quinn, but this is about both of them. They deviate on the moral spectrum. Ivy’s going to embrace her inner supervillain, and Harley is going to struggle with being labeled as a supervillain. How does that affect their relationship when these two are madly in love?

Season 3 introduces Nightwing. How did you find your version of Nightwing, compared to other versions of Dick Grayson?

PS: We really liked the idea of Nightwing, primarily because Batgirl has become such a fixture in the Bat-Family and we liked the idea of, “What happens when the ecosystem in the Batcave has completely changed?” He feels like he's being kind of pushed out by this charlatan in the form of Barbara Gordon. Those two will have an antagonistic relationship, at least early on. Nightwing will also have an antagonistic relationship with Harley.

There have been depictions of the Bat-Family before, but Harley Quinn is one of the most complete versions. How do you feel about beating everyone else to the punch?

JH: We were only going to do it if they each had a completely different point of view that would make for good scenes. I don't think the goal for us was to reunite the Bat-Family. But I was like: You have Damien, who is a little shit and our Gen Z-er, Babs who is so optimistic, and what Patrick described for Dick. Those three with Bruce Wayne, who is going through some shit, how they play off one another and how there’s conflict that comes about because it’s three unique personalities together. We like crew shows. Harley’s got a crew. The Bat-Family are a crew. It’s just fun to play in those worlds.

“Batgirl is going to play a really crucial role in Harley’s arc this season, in discovering where her true moral compass points.”

You pit these two “crews” against each other in Episode 2. What did you learn about these characters when they were paired like this?

PS: I would focus my answer on Batgirl and Harley. Batgirl is voiced by Briana Cuoco, Kaley’s sister. We see these two as mirror images, a sort of force of optimism in their respective crews. They do have a sisterly vibe this season, even though it makes Harley want to vomit that she’s friends with a hero like Babs. But they are. And Batgirl is going to play a really crucial role in Harley’s arc this season, in discovering where her true moral compass points.

What’s up with Jim Gordon this season? He’s terribly unfit for Gotham PD, let alone Mayor. Will he rise like the phoenix in Season 3?

JH: I don’t know that “phoenix” and “Gordon” go together in our show. Gordon is a broken man. We try to think about the Gordon everyone’s familiar with. That’s what Gordon was 20 years ago, in our show. So we never see that Gordon. We see the broken Gordon who’s so far gone, so far astray from what made him want to be a police officer in Gotham. He’s just looking for anyone to affirm him. This season he’s like, “Well, maybe voters will do that for me.” We like him as this pathetic character who just needs to go through therapy but would never do that, and trying to do the shortcut run for Mayor and have people love him.

“People started to understand we were mushing Sex and the City into Bane.”

Another side character getting focus this season is Bane. What’s encouraging his prominence?

PH: We get juvenile joy from writing Bane. Bane would be in every scene if the writers had their druthers, and I think it’s fair to say that in our spin-off Noonan’s, which HBO Max has picked up, Bane will be a huge presence. Literally and figuratively. He’s gonna be a series regular. But a Harley season without Bane is not a Harley season. I had my reservations when we decided to characterize him as the butt of the DCU, because in the comics he’s the smartest guy in Gotham. I was like, “Should we walk this back? Like it’s a ruse, he’s playing naïve?” And the writers threw tomatoes at me. He’s a joy to write.

At San Diego Comic-Con, a joke in Episode 2 involving Bane and Sex and the City got a big laugh. What’s the origin of that moment?

JH: It came about because we were toying with that scene, when the bank teller is going over his charges. Somebody in the writer’s room was like, “I wonder if this means Bane is depressed.” Somebody broke into the Sex and the City narrations like, “It made me wonder...” I remember thinking, “This joke is so fucking stupid, in a great way.” At the premiere at Comic-Con, I had forgotten that joke was coming. I’m like, “No one’s going to get this, it’s not gonna go well.” And then the waves of laughter as people started to understand we were mushing Sex and the City into Bane. People got it. I was like, “Oh my god, this is the best.”

Last year you guys made waves when you revealed that Batman wasn’t allowed to perform oral sex. Did the fan reaction influence the scene in Episode 3 where Batman’s apparent advance on Catwoman is shot down?

JH: Those were dark times.

PS: You’ll know when you’re watching the moment that it became. I honestly think you could interpret it still, the way it was animated and everything. If someone came into that episode with a clean slate, knew nothing of the Twitter virality, I think they might actually make the leap that he does do that. But I’ll leave it to the theater of the mind.

Three seasons in, what’s it like knowing Harley Quinn is a colorful counter-program to other DC media, such as The Batman?

JH: That's one of the cool things about DC. You can have those worlds and DC will sort of support them. Pat and I would also love to do things in live-action. Please put in your article that we want to do Booster Gold. A live-action Booster Gold.

JH: You can have Matt Reeves, you can have James Gunn, you can do things in the world and play with it in a way a lot of places might not be cool with. To be honest, we’ve found people who love The Batman and love our show. I don’t think it’s one or the other.