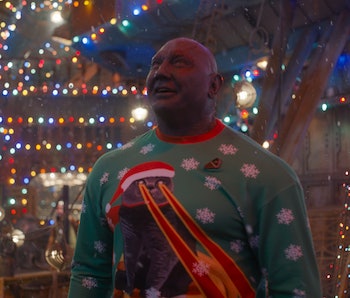 But just what happened to Knowhere, and why are the Guardians settling down there? There’s an entire galaxy at their disposal, which is like having the option to live anywhere on Earth and choosing a leaky houseboat.

The Holiday Special partially takes place in Knowhere, with a post-Endgame and Love and Thunder Guardians overseeing its rebuilding efforts. Christmas is also fast approaching, which inspires Mantis (Pom Klementieff) and Drax (Dave Bautista) to get Star-Lord (Chris Pratt) the gift of Kevin Bacon.

If you recall, Knowhere is the severed head of a Celestial, an ancient race present at the dawn of creation most recently seen in Eternals. The first time the MCU visited Knowhere was in the post-credits scene of Thor: The Dark World, but the location didn’t become official until Guardians of the Galaxy. Initially a mining colony that harvested the Celestial’s valuable biomatter, it later became a haven for outlaws.

One notable resident was the eccentric Collector (Benicio del Toro), whose museum included everything from Howard the Duck to an Infinity Stone. In Guardians of the Galaxy, our heroes visit Knowhere intent on making a sale to the Collector, and in Infinity War, the Guardians return to retrieve the Reality Stone. But they arrived too late, Thanos (Josh Brolin) having already taken it and left the whole place a fiery wasteland.

The MCU hasn’t spent much time in Knowhere since then, but now the Holiday Special returns to the iconic Marvel location. However, it’s still not abundantly clear why the Guardians have occupied Knowhere, let alone want to rebuild it. As fans, however, we know they’ll need a home base before Guardians of the Galaxy Vol. 3 hits theaters next year.

Vol. 3, which is set to be the last chapter for this iteration of the Guardians, will pit them against two enemies: Adam Warlock (Will Poulter), an artificial being created by Vol. 2’s Ayesha (Elizabeth Debicki) to destroy the Guardians, and the High Evolutionary, who actor Chukwudi Iwuji describes as “narcissistic” and “sociopathic” in his mission to forcibly enhance all living beings.

The Guardians will also reunite with Gamora (Zoe Saldana), who’s time-displaced after Endgame and has virtually no memory of her life with the group. Between all these threats and reunions, it’s helpful — and poetic — for the Guardians to set up shop on the same soil where they first became a proper team. There’s no better way to end a story than to return to the beginning, and to leave the place better than how you found it.

More like this
Entertainment
11 hours ago
Ant-Man's Memoir Is Real and Hints at Dark Quantumania Ending
By Eric Francisco
Entertainment
Jan. 26, 2023
Corey Stoll could have the chops to make a live-action M.O.D.O.K. work
By Mónica Marie Zorrilla
Entertainment
Jan. 25, 2023
The MCU could bring back a hero from its most underrated TV show
By Dais Johnston
LEARN SOMETHING NEW EVERY DAY.
Related Tags
Share: