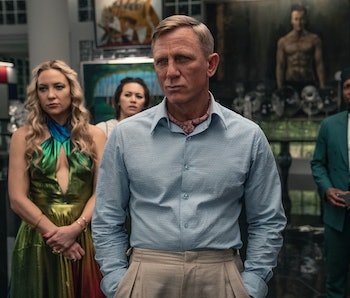 Joseph Gordon-Levitt isn’t the leading man in most of Rian Johnson’s movies, but he still ends up in them all somehow. Johnson’s latest movie, Glass Out: A Knives Out Mystery, is no exception.

In an interview with ET, Rian Johnson revealed the sneaky way he got Gordon-Levitt, who he first directed in the acclaimed 2005 thriller Brick, a small part in Glass Onion. While on the set of the new Peacock series Poker Face, Johnson asked Gordon-Levitt to do him a favor.

“I just said, ‘You have to trust me, say the word ‘dong’ really loudly,’” Johnson recalled.

In the movie, there’s a running gag where its central location — a lavish, high-tech mansion on a remote Greek island — dings with an audible “Hourly dong!” every hour. In his chat with ET, Johnson reveals Gordon-Levitt as its voice and says it’s an homage to one of his favorite movies.

“That’s a reference to one of my favorite mystery movies, Evil Under the Sun, there’s a big [plot point] in it with the ‘noonday gun,’ and they shoot a canon off at noon every day,” he said.

According to Johnson, Gordon-Levitt apparently misunderstood his directions. “In the script, it’s written as, I think, the ‘hourly gong,’” Johnson said. “[Joseph] said it wrong and said the ‘hourly dong.’ And I said, ‘That’s it, it’s the hourly dong now.’”

Since working together on Brick, a noir mystery set in a California high school, Johnson and Gordon-Levitt have remained friends and collaborators, with Gordon-Levitt getting at least a tiny role in all of Johnson’s movies. Besides also starring in his 2012 time travel action movie Looper, Gordon-Levitt had a cameo in Johnson’s 2008 comedy The Brothers Bloom, and a minor speaking role as an alien with a Texas drawl in 2017’s Star Wars: The Last Jedi.

In 2019’s Knives Out, Gordon-Levitt appeared via voice-over, playing a TV detective whose voice is heard through a laptop early in the movie. Glass Onion not only continues Johnson’s tradition of having Gordon-Levitt in his movies, but its franchise’s own tradition of making sure you never see Gordon-Levitt’s face. So keep your ears open whenever Knives Out 3 rolls around.

Glass Onion: A Knives Out Mystery will stream on Netflix on December 23.

More like this
Entertainment
Jan. 28, 2023
Where and how to watch the 2023 Oscar nominees
By Mónica Marie Zorrilla
Entertainment
Feb. 2, 2023
Everything Wrong with Netflix’s New Password-Sharing Rules
By Dais Johnston
Science
Jan. 28, 2023
The best mystery thriller on Netflix ignores a basic fact about hydrogen energy
By Tara Yarlagadda
LEARN SOMETHING NEW EVERY DAY.
Related Tags
Share: