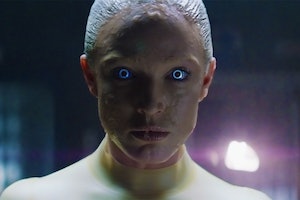 Getting your science fiction fix can be tricky without Netflix, Hulu, Amazon Prime, or that thing called basic cable. After some digging, we found streaming services aren’t the only ones with a plethora of sci-fi films available; YouTube has a selection of free movies for your viewing pleasure.

Robert Zubrin, aerospace engineer and founder of The Mars Society, had some wild ideas for getting humans to Mars back in 2007, which 10 years later makes much more sense. Once we’ve landed, Zubrin discusses civilization and how humans will use the soil to build tools, plant crops, produce oxygen, and eventually populate the planet with the first true Martians.

Erol, played by Haley Joel Osment (yeah, the kid from The Sixth Sense, Forrest Gump, and Pay It Forward), learns that his father time-traveled to 1946 to meet Albert Einstein and never came back. As the title suggests, the son follows his dad through time to bring him home. Thrilling, chilling, and probably more heartwarming than your usual sci-fi film, the story will make you think about what it means to exist in this multi-dimensional universe we call home.

This one gets credit for being super low budget and for faster-than-light space crystals, which allow humans to travel the stars effortlessly. Eventually a “dark wave” wipes out the power of the crystals, leaving humans drifting (get it?) aimlessly around the universe. 20 years later, a vessel with alive humans arrives at a spaceship graveyard where they find some pretty spooky things. Understanding it was made for only 5000 pounds, you might grow to appreciate it.

This Australian indie flick took five years to make because all of the actors were volunteers and could only work on the weekends. After total destruction by an alien empire, Earth is failing to revive itself via terraforming technology. Then four rebels join forces to take down the alien overlords. In addition to being available on YouTube, this 2004 film’s success also boasts an award for Best Sound at the Melbourne Underground Film Festival.

11. Attack of the Giant Leeches

In this black-and-white classic, produced in 1959, a doctor and a drunken game hunter discover giant leeches eating humans in a local swamp. It takes rounding up the entire police force before they can do anything about it. The movie is funny nowadays but was a real horror back then.

The often-maligned Frankenstein character finally gets the spotlight he deserves in this 2008 film. Igor follows, well, Igor as he follows his dreams of becoming an evil scientist in his own right, not just a lowly assistant. With an all-star cast including John Cusack and Steve Buscemi, this picture makes for the perfect family movie night.

9. It! The Terror from Beyond Space

All you need to know about this film is that it was cited by Ridley Scott as one of the primary inspirations behind his iconic film Alien. It's the story of a mission to Mars that goes horribly awry, leaving only one survivor. However, the Martian creature that slayed the crew is still very much alive and well — and ready to continue on its murder spree. It's the original sci-fi horror film, and as cheap as it may look, it's nice to dive into the genre's roots.

Speaking of cheap-looking movies, Arena is a 1989 sci-fi sports movie about a futuristic gladiator-like sport that pits man against alien. Just like any classic boxing movie, Arena has intrigue, behind the scenes corruption, a cheating scandal, a no-nonsense female lead, and an underdog story. All of that, plus a lot of lamé costumes.

Stan Lee is a titan of the science-fiction genre, and this documentary dives into his life from his military past serving in World War II all the way up to his prolific career as a cameo artist in Marvel movies. The entire universe will miss him, but with a movie like this so readily available, there's no way he'll be forgotten anytime soon.

Epoch is a 2001 movie with a different kind of 2001 premise. It follows the mysterious appearance of a monolith in the mountains of Bhutan. It emits a massive electromagnetic pulse resulting in widespread blackouts, prompting the world's governments to try and organize a response. It's like Arrival, but with more mystery and less linguistics.

RoboCop is an utter classic directed by Paul Verhoeven. It's a crime movie, action movie, and science fiction movie all mixed together, and the result is one of the most beloved sci-fi movies ever. It follows police office Alex Murphy as he undergoes a transformation into RoboCop, the cold, metal face of justice. This movie pulls no punches both literally and figuratively.

Jake Gyllenhaal stars in this romantic comedy that has gained probably too much more meaning in 2021. It depicts a boy with an autoimmune disorder forcing him to live within a plastic bubble as he attempts to create something resembling a normal life. It's the perfect cheesy teen rom-com to watch while socially isolating.

HBO may have catapulted Westworld to another level of fame, but lurking in YouTube's archives is the forgotten sequel to the original film. While only steely and terrifying Yul Brynner reprises his role from the classic sci-fi film, Futureworld is a must-see for fans of Westworld, be it film, series, or original novel.

Mel Brooks takes Star Wars, science fiction, and the concept of meta-humor to new heights in this film, starring Canadian national treasure Rick Moranis as Dark Helmet, an equally menacing and bumbling villain. Like all Mel Brooks parodies, this film's irreverent angle makes it a great companion piece to Star Wars, but it also works as a classic science fiction film in its own right.

1. Invasion of the Body Snatchers

There's nothing like a purely classic science fiction film. Donald Sutherland stars in this 1978 thriller following a health inspector as he uncovers an alien invasion happening under the public's knowledge. That's enough of a hook already, but just to make things even better, Leonard Nimoy plays a tweed-jacket-wearing psychiatrist. This film was the blueprint for so many films to come, and an essential in any science fiction education.

More like this
Culture
8.12.2022 11:30 AM
You need to watch the most awe-inspiring sci-fi epic on HBO Max ASAP
By David Grossman
Culture
8.6.2022 11:30 AM
20 years ago, Robert Rodriguez made the strangest sci-fi sequel of the early 2000s
By Jon Negroni
Entertainment
8.3.2022 4:17 PM
Prey is an old school throwback that brings new life to the Predator series
By Eric Francisco