“They’re trying to French fry us!” 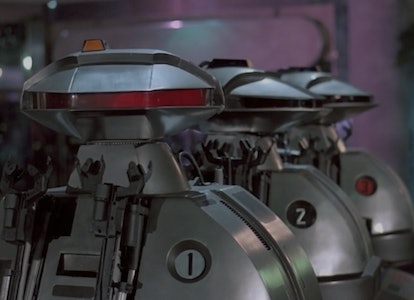 It would probably be a stretch to call Jim Wynorski’s movies “good.” But the prolific B-movie filmmaker has found a way to stay relevant within the ever-changing landscape of low-budget exploitation movies, honing in on the key elements of various disreputable subgenres.

But Wynorski’s greatest artistic achievement came when he was just starting out, working under the tutelage of legendary B-movie producer Roger Corman. Wynorski’s second feature as a director is the rare B-movie that lives up to the ridiculousness of its title, and must be seen to be believed. Good news: you can see it online for free, right now.

Is 1986’s Chopping Mall “good”? Maybe not, but it fully accomplishes its goals, delivering everything you could reasonably want from a movie about mall security robots run amok.

Wynorski and co-writer Steve Mitchell bring a self-aware, self-deprecating sense of humor to the movie, which is full of tributes to the rich history of B-movies (and to Corman’s work in particular). Produced by Corman’s wife Julie, Chopping Mall is set in a mall with stores that include Peckinpah’s Sporting Goods and Roger’s Little Shop of Pets, references to director Sam Peckinpah and Corman himself.

Chopping Mall opens with a presentation about the so-called Protectors, security robots that look like a cross between Short Circuit’s Johnny 5 and RoboCop’s ED-209.

“They remind me of your mother,” Paul Bland notes to his wife. “It’s the laser eyes.”

Meanwhile, a company scientist assures the audience, “Absolutely nothing can go wrong,” which is a guarantee that soon, absolutely everything will go wrong.

Their first target? The security technicians supposedly monitoring them. One oblivious technician is reading a dirty magazine, while the other is reading They Came From Outer Space, a book of sci-fi stories that were later adapted into movies (edited, of course, by Jim Wynorski). That combination sums up the appeal of Chopping Mall, which offers plenty of gratuitous nudity before getting to the robot killing spree.

Wynorski doesn’t just show off the bodies of his female stars, though. The main character is assertive, independent pizza parlor employee Alison (Kelli Maroney), who isn’t convinced about the party or the potential blind date set up by her friend and co-worker Suzie (Barbara Crampton). Alison and Suzie mock the boorish male customers who treat them like pieces of meat (“It is ‘babe,’ isn’t it?” is their impression of an entitled man talking down to them), and when it comes time to fighting killbots, Alison proves the most resourceful of the bunch.

Her blind date is the shy Ferdy (Tony O’Dell), who’s honorable but still not as accurate with a rifle as Alison is. “Dad’s a Marine,” she shrugs after being praised for a perfect shot, just like her similarly perky but deadly character in 1984’s Night of the Comet.

Before Alison gets to shoot at some killbots, though, her slightly less responsible peers get their throats slit and their bodies blown to bits (among other injuries), all while the Protectors intone “Have a nice day.” Anyone who isn’t sure what they were getting into with a movie called Chopping Mall will fully understand once the Protectors’ lasers explode one tragic mallgoer’s head.

Wynorski maintains the campy tone throughout, but he also generates some genuine suspense from the menacing Protectors as they stalk the characters through various stores in the mall. The robots cut through metal doors, ride elevators, and even mess with the climate control system as the characters attempt to escape via the vents.

“They’re trying to French fry us!” Suzie cries out, as the cramped ducts heat up.

At 77 minutes, Chopping Mall has very few lulls and never outstays its welcome. Wynorski understands his mandate perfectly, and he creates a movie that his mentor Corman can be proud of. “I guess I’m just not used to being chased around a mall in the middle of the night by killer robots,” laments Linda (Karrie Emerson) as the situation looks grim late in the movie. But for a B-movie workhorse like Wynorski, that’s just another day at the office.

Chopping Mall is streaming for free on Pluto TV, Popcornflix, Shout Factory TV, Tubi, Vudu and Hoopla in the U.S.