“Obviously, I’m living in the past.” 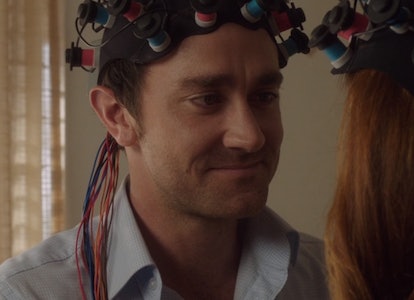 When Dean and Lana arrive for their latest anniversary celebration, they discover that the hotel where they spent their previous anniversary is completely abandoned. Dean’s (Josh McConville) carefully planned itinerary for the weekend is immediately ruined, and that’s before Lana’s (Hannah Marshall) ex-boyfriend Terry (Alex Dimitriades) shows up to win her back.

Soon, Lana is leaving with Terry after Dean tearfully tells her he never wants to see her again. His relationship destroyed, so Dean does the only sensible thing: He stays at the empty hotel for the next year, building a time machine that will allow him to travel to the past and makes things right with Lana.

Of course, that’s not how it works out, and the delight of Australian writer-director Hugh Sullivan’s The Infinite Man is in watching the many, many ways Dean screws up his chance with Lana — despite having essentially unlimited opportunities. Even before he builds the time machine, it’s clear that Dean is controlling and insecure. Lana seems to genuinely love him, but he’s unable to let go of his meticulous calculations even in the most intimate moments. “Sexual congress in five minutes!” he yells down to Lana from the hotel’s second floor with the enthusiasm of a teenage boy about to see his first internet porn.

Dean’s own jealousy and immaturity is his undoing in funny and then increasingly poignant ways as the movie progresses. He’s immediately threatened by Terry’s macho bluster, despite Lana’s obvious lack of interest in this creepy guy who can’t let go of a woman he dated for two weeks four years ago.

When Dean overhears what he believes is Lana’s plea for Terry to run away with her it becomes the catalyst for the entire doomed enterprise. Later, as Dean keeps traveling back to the day of the anniversary over and over again, he becomes jealous of his future and past selves. Eventually, there are multiple Deans in various places around the hotel, all in various stages of breaking up or reconciling with Lana.

The Infinite Man is as intricate a time travel movie as Shane Carruth’s Primer or Nacho Vigalondo’s Timecrimes, with the kind of plot that can only be understood via elaborate diagrams. Mercifully, it’s also the kind of movie that doesn’t require a detailed understanding of every narrative thread in order to be entertaining.

When there are only two or three Deans and Lanas in the mix, it’s not that difficult to keep track of where each one is, both physically and temporally. But by the third act, there are too many versions of the characters in too many places to follow along with at once. This confusion contributes to the comedy, and Sullivan is adept at unexpectedly returning to previous scenes in new contexts, providing both greater humor and greater emotional depth.

“Obviously, I’m living in the past,” Dean says to Lana at one point, and his fixation on getting everything right prevents him from moving forward with his life or his relationship. The movie never leaves the one-year period between anniversaries, as Dean waits out those interim months with grim determination, always convinced that the next time he goes back, he’ll perfect the formula. Even with Lana standing in front of him, professing her love and insisting they leave the hotel, he can’t resist staying behind to put the proper pieces in place so that past events play out exactly as they already have (even though that means devastating his past selves).

The relationship between Dean and Lana seems toxic at first, and Sullivan never reveals any back story to explain their emotional connection. Instead, he offers a different kind of character development, peeling back layers of scenes as he approaches them from new angles. What seemed like callous or unstable behavior from one character turns out to be motivated by something they experienced earlier (or later, depending on how you view the timeline).

The movie’s one bit of information about the pre-anniversary past comes when Dean and Lana talk about their first date. Dean pulls out an audio recording he made of that encounter, already obsessively chronicling and analyzing their romance. It’s a potentially creepy moment that Sullivan makes sweet and tender, thanks to the effective performances from McConville and Marshall.

Sullivan is working with limited resources, so those performances are essential to creating an immersive sci-fi world. The stars bring new layers to their characters even when just delivering the same lines from a slightly different perspective, and that gives the story a grander scope than you'd expect from a film with three people and one location.

The time machine itself is cobbled together from electronics and computer parts that look like they were picked up at a swap meet. The desolate hotel (where virtually the entire movie takes place) looks like something out of the post-apocalypse.

But all those simple elements add up to a convincing story about the perils of time paradoxes, and the way that obsessing over past mistakes can prevent people from living their lives in the present.

The Infinite Man is streaming for free on Tubi in the U.S.