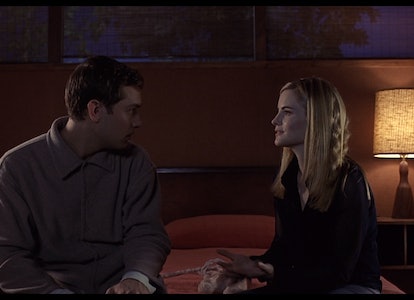 In 1999, a mind-bending sci-fi movie inspired viewers to question the nature of existence, placing characters within a simulated world so real to them that they couldn’t tell the difference between virtual and actual reality. The movie followed a seemingly naïve office worker as he questioned everything he thought he knew about his life, in the process joining a rebellion against the creators of the shared simulation.

That movie, of course, was The Matrix, the massive global box-office hit and pop-culture phenomenon. The success of The Matrix overshadowed pretty much every other sci-fi movie that year (and even in subsequent years), and its influence can still be felt in any movie that takes on the idea of reality as a simulation. But another, much less successful movie with the same themes was released less than a month later, virtually guaranteeing its failure at the box office and with audiences.

That’s a damn shame because eXistenZ is an underrated classic — despite that terrible name.

David Cronenberg’s eXistenZ isn’t going to challenge The Matrix for sci-fi supremacy or inspire a whole world of sequels and spin-offs. Like most of Cronenberg’s movies, it’s weird and off-putting and not interested in making viewers comfortable. It’s not “mind-blowing” in the sense that The Matrix is, with its carefully calculated reveals and cutting-edge special effects sequences.

Cronenberg’s film operates on something closer to dream logic, and even when it drops a huge twist near the end, it’s more about messing with the characters’ emotions than about fitting the pieces of the plot together. eXistenZ is visceral where The Matrix is cerebral.

In the best Cronenberg tradition, it’s also a total gross-out. Set in some undefined future, eXistenZ opens in what appears to be a dingy church basement, the kind of place that would host an Alcoholics Anonymous meeting, complete with wooden folding chairs. But this is somehow the launch event for a major new video game that cost $38 million to develop, created by superstar game designer Allegra Geller (Jennifer Jason Leigh).

Allegra is here to introduce a focus group to her game eXistenZ, but this isn’t some flashy Steve Jobs-style Apple presentation. The evening’s host (Christopher Eccleston) writes the name of the game (emphasizing its annoying stylized capitalization) on an actual chalkboard.

The “game pods” that people use to play eXistenZ don’t look anything like modern video game systems. They’re pale pink and literally writhing, like a combination between a fetus and a Fleshlight. The first glimpse at a game pod offers just a hint of the sexualization of technology that Cronenberg focuses on throughout the movie, in a playful and oddly sensual way, even in patently ridiculous moments. Game pods are attached via “umbi-cords” that plug into “bio-ports,” orifices that are installed at the base of people’s spines.

Umbi-cords aren’t the only things that penetrate bio-ports as the movie goes on.

Almost all technology in this world is organic, including the gun used in an assassination attempt on Allegra. She’s shot with a bullet made from a human tooth, propelled from a gun constructed out of flesh and bone. In the ensuing chaos, Allegra escapes, joined by Ted Pikul (Jude Law), a seemingly mild-mannered employee of game company Antenna who just happens to be in the right place at the right time to help Allegra. “Death to the demoness Allegra Geller!” shouts the would-be assassin, who’s part of a movement of “realists” opposed to people spending all their time in virtual worlds.

That’s just where Allegra and Pikul end up, though, porting into Allegra’s pod to play eXistenZ, ostensibly so Allegra can verify that it isn’t damaged. But the game’s world is even more nightmarish than the supposed real world, and the same terrorists (and their repulsive weaponry) exist in the game, just in a slightly different form. “It’s a game everybody’s already playing,” Allegra says of eXistenZ, which is so baffling and overwhelming and discordant that it’s hard to imagine anyone willingly participating in it.

The characters in eXistenZ aren’t on a journey toward enlightenment or liberation like the characters in The Matrix, and the guy who shouts “Death to realism!” is just as clueless as the guy who shouts “Death to the demoness Allegra Geller!” Cronenberg is more interested in whatever freaky stuff Allegra and Pikul can get up to with their bio-ports.

“I have this phobia about having my body penetrated … surgically,” Pikul says about his reluctance to get fitted with a bio-port. “New ports are sometimes a bit tight,” Allegra says as she lubes up his recently installed port with WD-40. Later, she fingers his port, and after they’ve gotten more intimately acquainted, he sticks his tongue in hers.

It’s a sci-fi version of the automobile fetishization in Cronenberg’s preceding movie, 1996’s Crash, and a self-consciously silly approach to the potential seriousness of cyberpunk. Cronenberg isn’t interested in intricate futuristic world-building, and the game created by supposed genius Allegra seems haphazard and glitchy (Allegra herself complains about the shaky accent of one particular NPC).

eXistenZ is streaming for free on Crackle, Plex, and Kanopy in the U.S.