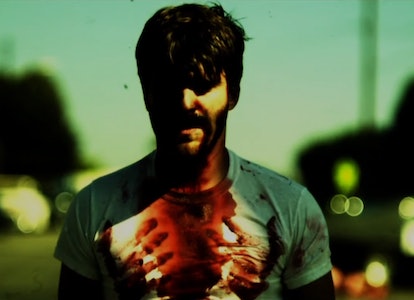 Watch enough sci-fi movies, and you too might start to think that the apocalypse is actually kind of cool. That’s what’s happened to best friends Woodrow (Evan Glodell) and Aiden (Tyler Dawson) in Glodell’s 2011 feature-film debut Bellflower, an examination of geek misogyny from a time before directors like Rian Johnson made genre self-reflection mainstream.

In the same year that Battle: Los Angeles pitted aliens against the military and Rise of the Planet of the Apes rebooted Charlton Heston's sci-fi classic into a modern apocalypse franchise, Bellflower stands as the most interesting movie of 2011 to tackle the concept of the end of the world.

Woodrow and Aiden seem like a couple of harmless SoCal hipsters living in a threadbare apartment and spending their evenings making the rounds of local bars. They love the Mad Max movies, which they watched dozens of times on VHS as kids in Wisconsin, and they have notebooks filled with doodles of sci-fi characters with names like Lord Humongous.

But as a series of quick flashes indicate in the opening of the movie, the pair’s violent visions will eventually leave the realm of fantasy. There’s blood and fire in the future, and they’re the ones responsible for it. Woodrow and Aiden aren’t just daydreaming about the apocalypse, they’re actively preparing it by constructing the kind of equipment that Max Rockatansky himself could be proud of.

“I’m building a flamethrower,” Woodrow says to Milly (Jessie Wiseman) when she throws the standard “What do you do?” question at him after they meet at a bar. Woodrow and Milly have a perfect indie-movie meet-cute when they’re pitted against each other in a cricket-eating contest (she easily beats him).

If you forget those initial glimpses of violence (or at least store them away in the back of your mind), the first half of Bellflower could be any early ’10s indie romantic dramedy about aimless slackers falling in love. None of the characters in this movie appear to have jobs but they have plenty of money for booze and flamethrower parts.

Woodrow is timid and reluctant when Aiden encourages him to go out and hit on women, in contrast to Aiden’s bold, borderline inappropriate confidence. But Woodrow and Milly click right away and they spend their whole first evening together just talking. Woodrow insists on taking Milly out on a proper date the next evening. He seems like a considerate, thoughtful contrast to his loud best friend.

Woodrow arrives at Milly’s house in a nice button-down shirt and vest and brings her flowers. He offers to take her to a fancy restaurant, but she has something else in mind. “I want you to take me to the cheapest, nastiest, scariest place you know of,” she tells him, and so he drives her to a roadside stop in Texas.

The epic first date that lasts for days (and involves driving halfway across the country) could come right out of a cheesy romantic comedy, but there are hints of darkness even in the earliest part of this honeymoon phase. When Woodrow and Milly walk up to the cheap, nasty, scary place in Texas, a man outside grabs Milly from behind. Woodrow immediately turns violent, although he’s the one who ends up knocked over with a punch.

As she lies in Woodrow’s arms, Milly warns him that their relationship will only lead to heartbreak. That turns out to be an understatement, but for a brief moment, it seems like these two oddballs are perfect for each other, completely in sync in their grungy, degenerate lifestyles. In addition to flamethrowers, Woodrow and Aiden build custom cars that are tailor-made for the post-apocalypse, and Milly is gleeful when Woodrow shows her the whiskey dispenser he’s installed in his current vehicle. “It’s like a James Bond car for drunks,” she marvels.

Back in California, Aiden is still hard at work on his flamethrower and Mother Medusa, a car named after the gang that he and Woodrow plan to form after the apocalypse. “If and when the apocalypse happens, we’re set up to rule over the wasteland,” Woodrow explains to Milly, who convinces him to trade his car for an apocalyptic-looking motorcycle while they’re in Texas. They return home to find a party raging at Milly’s in her absence, and once again, Woodrow turns violent in an instant, smashing a bottle over the head of a man who’s harassing another party guest.

Glodell captures all of this in a grimy, oversaturated visual style, with blown-out images and smudge-covered lenses that make it look like he’s shooting the movie with salvaged equipment from after the end of the world. The custom vehicles and weapons are all actual pieces built by Glodell and a minimal crew, and there’s a real sense of danger to the characters’ interactions.

As the relationship between Woodrow and Milly sours, the characters’ obsessions with weapons and destruction and the collapse of civilization don’t seem so endearing anymore. All of this time dreaming about a world in which the rules don’t apply anymore has turned Woodrow and Aiden into bitter nihilists, and taking what they want from women isn’t much different from using a flamethrower to burn piles of junk in their makeshift workshop.

Eventually, an apocalypse of sorts does arrive, although by that point the movie has become so abstract that it’s not clear whether it’s an actual apocalypse or just an emotional one. Either way, the characters have lost themselves entirely in their bleak, violent imaginary worlds, where the guys with the fastest cars and the biggest guns get anything they want.

“Lord Humongous doesn’t get cheated on by some stupid bitch,” Aiden tells Woodrow, and what’s meant as a badass affirmation just sounds like a pathetic cry for help.

Bellflower is streaming for free on Crackle, Popcornflix, Tubi, Hoopla, and Kanopy in the U.S.