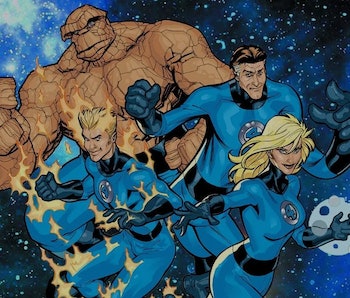 Reed Richards, Sue Storm, Johnny Storm, and Ben Grimm are headed to the big screen... again. Marvel’s “first family” starred in standalone Fox-produced Fantastic Four flicks in 1994, 2005, 2007, and 2015 with little success. Now that Marvel Studios has taken the reins, will the fourth time be the charm?

Kevin Feige, Marvel Cinematic Universe head, hopes so. But on Saturday, September 10 at D23, Feige had little to say about the upcoming movie beyond confirming its director. Here’s what we learned, along with a look back at recent casting rumors.

WandaVision alum Matt Shakman will go on to direct his second major MCU project: Fantastic Four. Along with WandaVision, Shakman has directed episodes of Succession, Mad Men, Six Feet Under, The Boys, The Great, House M.D., Fargo, and It’s Always Sunny in Philadelphia (which he also executive produces). Shakman’s proven ability to handle stories of many genres, along with superhero narratives, is a good sign for this latest iteration of the Fantastic Four.

Who’s in the Fantastic Four cast?

Kevin Feige made it clear that there was nothing else to say about Fantastic Four for the moment, but here’s a quick rundown of Marvel’s First Family and who might be playing them in the MCU.

Rumor has it that Penn Badgley, known best for starring in The CW’s Gossip Girl and Netflix’s You, will be Reed Richards. Reed (aka, Mister Fantastic) is husband to Invisible Woman, best friend to The Thing, and the smartest man alive in his respective universe. He’s the leader of the Fantastic Four, and can also stretch his body in extraordinary ways. In more recent years, the character has also taken on a slightly darker tone as his pursuit of science sometimes overshadows his desire to do good.

Badgley has shown in his aforementioned famous television roles that he can tackle being a charismatic dreamboat and disturbing villain (often at the same time). Badgley also has rom-com chops, as depicted in Easy A opposite Emma Stone, as well as a knack to star in more serious features like Margin Call, for which he won an Independent Spirit Award.

Just days before D23, word began to spread about Comer’s casting in F4, we got our answer at D23. Jodie Comer, most known for her television roles is our new Sue Storm (aka, Invisible Woman).

Comer’s other credits include two films that came out in 2021: The Last Duel, starring opposite Adam Driver, Matt Damon, and Ben Affleck, and Free Guy, starring opposite Marvel alums Ryan Reynolds and Taika Waititi. She has won two British Academy Television Awards and one Primetime Emmy Award.

Sue Storm has the power of invisibility and can also manipulate force fields. She’s the Human Torch’s sister and married to Mister Fantastic.

Johnny Storm (aka, the Human Torch) is Sue Storm’s brother and one of the most notorious playboys in all of Marvel Comics. The handsome and brash Johnny is able to control any nearby fire and both engulf himself and absorb fire without any burns. His catchphrase is “Flame on!”

We have no idea who might play the Human Torch.

Ben Grimm (aka, The Thing) is instantly recognizable thanks to his rocky exterior. But underneath all of that hard and stony dermis is a sensitive man with quick wit. He has superhuman strength.

We have no idea who might play The Thing.

When is the Fantastic Four release date?

The Fantastic Four release date was revealed earlier this year at San Diego Comic-Con by Marvel boss Kevin Feige. Fantastic Four whooshes into theaters on November 8, 2024, but we’re crossing our fingers for glimpses of the super foursome in a Marvel post-credit scene before then.