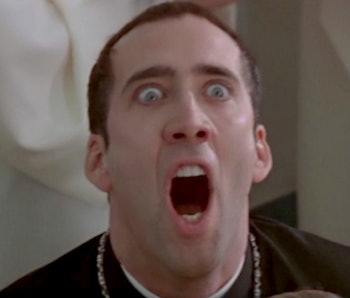 Face/Off is a perfect movie. I think that’s one thing we can all agree on (if you disagree, please leave). So how could you possibly top the 1997 John Woo original?

Maybe some new stunt casting? Or even more sci-fi face swapping? As tempting as that sounds, Face/Off 2 (actual title unknown) director Adam Wingard is taking a different approach with his sequel: he’s giving us more of everything we loved about the original. More humor, more action, and believe it or not, more Nicolas Cage (Castor Troy) and John Travolta (Sean Archer).

“My approach isn't to try to top it, it’s to try to continue it.”

“My approach isn't to try to top it,” Wingard tells Inverse, “it’s to try to continue it. Those characters are very rich, and that movie really does tee up a sequel very nicely. I would never be so vain, or narcissistic or whatever to think that I could ever top Face/Off. It really is a perfect action movie.”

Wingard, who’s currently promoting his latest film Godzilla vs. Kong, reveals that the script for Face/Off 2, which he’s writing with his longtime collaborator Simon Barrett, is almost done. “We’re in the final stages of finishing the script,” he says. “We are so thrilled.” After that, all he needs is approval from Paramount, along with Travolta and Cage, who Wingard recently revealed in an interview with Showbiz Cheatsheet are interested in returning.

For the writer-director, there is no Face/Off 2 without the original two stars.

“Face/Off isn't an empty sci-fi gimmick film to me,” Wingard says. “I see it as this exciting character study film. It's about Sean Archer and Castor Troy. And that's where we're picking up. We're continuing the Troy and Archer storyline. That's the movie I want to see.”

Whether the original Face/Off is meant to be funny, or if that’s just a byproduct of Cage’s overacting (and Travolta trying to keep up), is a mystery that may never be answered. But for Wingard, the movie is a comedy above all else.

“It's a very funny movie because I think the original Face/Off is extremely funny,” he says, “I think we're able to bring that sense of humor to it.”

“We have some of the most insane action set pieces that have ever been seen.”

Then again, this is an action film too, and that may be one area where Face/Off 2 actually manages to top the original.

“We have some of the most insane action set pieces that have ever been seen,” Wingard says. “So, in that regard, I think it'll live up to what you want from Face/Off, and in no way are we going to step on the legacy of that movie.”

Godzilla vs. Kong is in theaters and HBO Max on March 31.