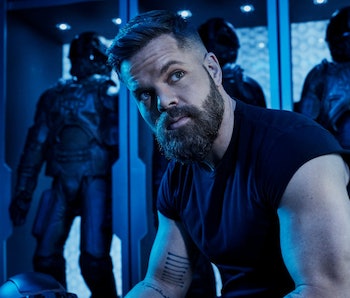 The Expanse is going deep. Deep underground, that is.

This week's episode, "Down and Out" already marks the halfway point of The Expanse Season 5. Amos Burton's (Wes Chatham) return to Earth after a long absence has already been pretty eventful, and it's about to take another dramatic turn. "Timmy" leaves Baltimore to visit his old pal Clarissa Mao (Nadine Nicole). It's a good thing he stopped by Luna on the way home to make nice with his "favorite stripper" Chrissie Avasarala (Shohreh Aghdashloo), because he needed friends in seriously high places to gain access to the underground facility where his old pal Peaches is being held. Suffice to say his visit doesn't exactly go according to plan.

You can check out Inverse's exclusive first-look footage from this week's episode after the jump.

We haven't seen much of Clarissa since Season 3 of The Expanse, when she's hell-bent on getting revenge on the Rocinante crew for taking down her obscenely rich father's top-secret Protomolecule experiments. Disguised as "Melba Koh," Clarissa attempts to frame Holden for destroying a UN vessel, but she ultimately changes sides, fighting alongside him and playing a critical role in activating the Ring Gates and preventing the destruction of the Sol System.

Still, a last-minute change of heart can't erase all she's done. She's hauled off to prison for bombing the UNN ship Seung Un at the end of Season 3. We only Clarissa her briefly in the opening episode of Season 4, on a video call with Amos, where they discuss their journey back from the Ring.

Once Season 5 rolls around, Clarissa's had plenty of time to think about the significance of her actions — and to mourn the comfortable life she's long since lost.

"She's going through this relinquishing of her identity," Nicole tells Inverse. "She has cut ties to her family, she's let go of trying to prove herself to her father. But now she's just lying in the bed that she's made — helpless, having given up. She's done so many horrible things that she just can't come back from it."

More like this
Entertainment
8.12.2022 4:04 PM
The Mandalorian Season 4 is coming sooner than expected
By Dais Johnston
Entertainment
8.9.2022 1:00 PM
Has your favorite HBO Max show been canceled? The fate of 9 sci-fi series revealed
By Robin Bea
Entertainment
8.5.2022 12:30 PM
For All Mankind Season 3’s space mogul is better than Elon Musk — here's why
By Ryan Britt
Related Tags
Share: