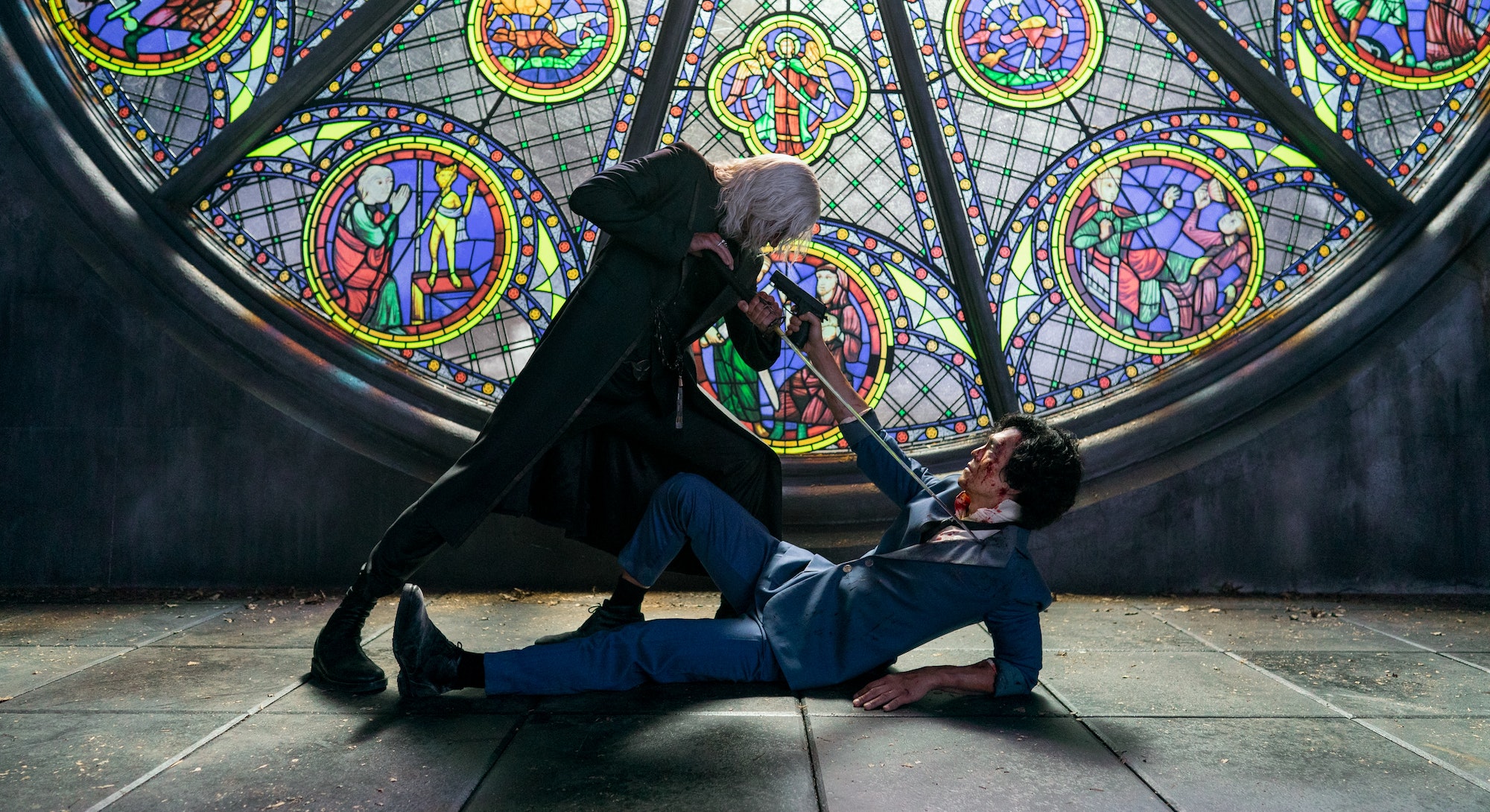 The essence of bebop was that it was music you couldn’t dance to.

While traditional jazz got people moving, bebop made people listen closely. Erratic and breathless, it inverted the role of jazz musicians, at least to the ears of journalists who coined the term. By eschewing more accessible dance rhythms, bebop freed up soloists to improvise atop existing compositions, exploring intricate and ever-accelerating chords and harmonies.

While bebop often sounded strange, especially to those hearing it in its early years, the style’s stark departure from conventions was its entire appeal. Cowboy Bebop, the Japanese anime that first premiered in 1998, lived up to the spirit of its namesake.

Animator Shinichirō Watanabe’s artistry eschewed the sugary aesthetics of anime at large; when it premiered, Cowboy Bebop felt fresh, even though it was unabashedly a pastiche of many atypical touchstones: pulp sci-fi, gunslinger westerns, detective noir, and, of course, jazz. The anime lasted for all of 26 half-hour episodes and one feature film, never telling a complete story across its runtime. Cowboy Bebop had no plot. It came and went like a gust of wind.

Given this, many have been understandably suspicious of the new live-action remake of Cowboy Bebop, streaming Friday on Netflix. And unfortunately — to cut to the chase — the series does little to dispel that skepticism.

Despite its labored efforts to resemble the anime — including a beat-for-beat recreation of its energetic opening (complete with animated cigarette smoke) and a diverse cast by John Cho, whose magnetism as a leading man has been long overlooked — one can’t shake the feeling Hollywood filmmakers have again misunderstood the nuances that exist within Japanese animation.

Netflix’s Cowboy Bebop, from showrunner André Nemec (Life on Mars), is a dud, simply put, that falls on its face less because of the liberties it takes with the anime and more because of its inescapable sense of unoriginality. This Cowboy Bebop, far from a triumph of translation, exists as a cautionary tale of artistry crushed beneath the Netflix house style.

The show is firstly turgid, told in bloated hour-long chapters that fail to pick up pace. However colorful and textured its physical environments appear, the paradox of high-budget streaming means no amount of money visibly been thrown into the production can stave off the sense audiences are watching a cheap knock-off.

Incompetent image composition, choppy editing, and wholesale mimickry of the anime that doesn’t grasp onto whatever made Cowboy Bebop special in the first place results in not just a subpar adaptation, but also validation for the most insufferable Internet trolls who can now brag, “Told you so.” (A depressing end-result for all of us.)

Like the anime, Cowboy Bebop centers on three galactic bounty hunters: Spike Spiegel (John Cho), an ultra-cool martial artist with a haunted past; Jet Black (Mustafa Shakir), an ex-cop with a tender heart; and Faye Valentine (Daniella Pineda), a spunky femme fatale and amnesiac desperate to learn her true identity. The three ride aboard the Bebop, the cruddy ship they call home. In this far-flung future, Earth is abandoned and humans have terraformed other planets; our heroes are known as “cowboys,” hopping from planet to planet to catch outlaws and make an easy buck.

There is, tragically, another plot shoehorned into Cowboy Bebop as well. Vicious (Alex Hassell), Spike’s former partner in a criminal yakuza called the Syndicate, wants to take Spike’s head off, which forces the crew of the Bebop to keep looking over their shoulders throughout the show’s half-episodic, half-serialized narrative. Meanwhile, a beautiful club singer, Julia (Elena Satine) comes back into Spike’s life to add further intrigue.

Anime fans haunted by the 2009’s live-action bomb Dragonball: Evolution often ask of any Hollywood adaptation, “Is it faithful?” In this Cowboy Bebop’s case, the answer is yes. Mostly. The show dresses its characters in the cool threads of their anime counterparts (though Pineda’s Faye is given more clothing for practical reasons) while Yoko Kanno’s original music is essentially left intact. Episodes have plots or story beats near-identical to the anime’s most memorable moments. But all of this amounts to spiritual cosplay: The show looks the part, but it never feels right, a byproduct of haphazard construction that plagues it from top to bottom.

The show looks the part, but it never feels right.

While the Netflix series offers its own unique spin on the anime across its ten episodes, including a baffling twist-ending that not even hardcore fans will see coming, that this has been designed as a binge-watch distorts Cowboy Bebop into an odd monstrosity. Any mystery in the anime, especially where Spike’s sad past was concerned, has been overwritten. What was once lore wisely shrouded in shadows is now exposed in the naked light of Netflix serialization. And what’s left isn’t a sexy story around Spike and an old flame, but rather more rudimentary heartbreak that could barely service a daytime soap opera.

If there’s a high mark the show hits, it’s the fact that its all-star main cast was successfully assembled to begin with. Cho, Shakir, and Pineda enter Cowboy Bebop full of texture, energy, and pizzazz that feels both respectful of the anime’s tone but still wholly their own. Cho proves he’s the real deal. As Spike, he oozes cool, charm, and wit, a modern-day James Shigeta. Cho may not be the Spike of your Toonami memories, but he’s the Spike he was always meant to be. Shakir’s Jet brings warmth to the cold-metal interiors of the Bebop, while Pineda supplies all the humor and sex appeal Faye famously dished out in animation.

Sadly the same cannot be said for Hassell and Satine, playing Vicious and Julia. Through no fault of their own, their characters’ added screen time adds little value. Any time these two are on screen, the show comes to a screeching halt, sabotaging any groove the show settles into. And in a show this ultimately terrible, such moments of genuine cohesion feel rare.

It sucks that Cowboy Bebop sucks. Imagine if this show was great. Imagine if this show had been allowed to be more than a Netflix content dump. The original Cowboy Bebop wasn’t celebrated because it was a sci-fi anime with cool characters, but because it stood out in a crowded marketplace through the confidence its art and vibes-centric storytelling radiated. The same can’t be said for Netflix’s version, a funhouse-mirror adaptation that stretches and distorts a classic until it’s misshapen, blatantly adding hours to satisfy Netflix shareholders who increasingly equate success with volume.

Here’s where everything wrong with the adaptation can be summarized in a nutshell: The original anime’s memorable end credits, set to Yoko Kanno’s “The Real Folk Blues,” featured beautifully framed illustrations that just barely told the story of Spike’s heartbreak. Netflix, a streaming service that famously wants you to skip the credits and get onto its next offering, gives audiences nothing to watch in its credits but still plays the same song.

Netflix’s Cowboy Bebop plays all the right notes. But without vision, it fails to find that perfect rhythm.