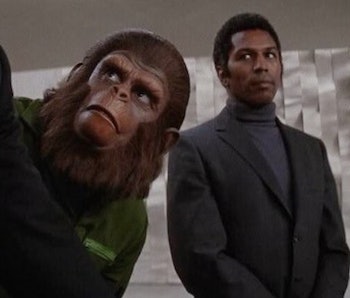 When producers planned to reboot the Planet of the Apes franchise with Rise of the Planet of the Apes in 2011, they didn’t look to the original 1968 film for inspiration. Instead, they borrowed elements from a later sequel, a movie that spoke more vitally to the times in which it was made and that could guide the contemporary social commentary of the new series. The iconic scenes and quotable lines of the original Planet of the Apes are rightfully ingrained in pop culture, but its third sequel may be the movie with the longest-lasting impact on the franchise.

Released 50 years ago this week, Conquest of the Planet of the Apes remains startlingly vital, especially in its brutal, explosive climax. It starts a bit slowly, with some residual cheesiness left over from the previous movie, 1971’s Escape From the Planet of the Apes. That movie shifted the series’ setting from the far-future planet dominated by intelligent apes to contemporary Earth, as apes Cornelius (Roddy McDowall) and Zira (Kim Hunter) travel through a time rift following the destruction of their world. They’re eventually killed by humans scared of the potential for an ape-dominated future, but Conquest reveals that their son, Caesar, avoided his parents’ grim fate.

Escape lurched from silly comedy to silly sci-fi, but Conquest is serious and thoughtful, even when bringing back Ricardo Montalbán as circus impresario Armando. Montalbán tones down his performance here, and it makes sense that Armando’s demeanor has hardened in the 20 years that have elapsed between Escape and Conquest. Set in the far-flung future of 1991 somewhere in “North America,” Conquest envisions an authoritarian state in which many of the prophesied early developments of ape society from the previous movies have come true.

Caesar is now a full-grown adult played by Roddy McDowall, who gives perhaps his most affecting performance of all his appearances in the series. After decades of traveling through “the provinces,” Armando and Caesar come to an unnamed city, represented by stark concrete and steel buildings, all harsh angles and cramped spaces. Caesar is horrified to see that as apes have evolved to become more intelligent, they’ve essentially been enslaved by humans, forced to perform menial tasks for a decadent leisure class supported by the repressive government.

The political allegory in Conquest is more blunt and insistent than in any other film in the series, but screenwriter Paul Dehn (who worked on all four Planet of the Apes sequels) and director J. Lee Thompson use that to their advantage, making a sci-fi movie with the urgency of contemporary social-issue dramas like Medium Cool or In the Heat of the Night. There are obvious parallels between the treatment of the apes and the history of slavery in America, and Conquest makes that point even clearer via human character MacDonald (Hari Rhodes), a high-ranking Black official in the city government.

MacDonald is the voice of reason compared to the city’s sadistic Gov. Breck (Don Murray), who’s obsessed with finding and eradicating the “talking ape” who could precipitate the downfall of humanity. When Armando is detained by police, Caesar escapes by hiding himself among a shipment of ape slaves coming from Borneo. He’s then auctioned off and enlisted as a servant for Gov. Breck himself, where he attempts to hide his intelligence by fumbling some basic tasks. “Brightness has never been encouraged among slaves,” MacDonald comments sarcastically, right before the white governor haughtily asserts that they were all slaves once, in one way or another.

Declaring himself the descendant of slaves, MacDonald later comes around to support Caesar’s cause as Caesar foments an ape rebellion. While the first half of the movie can sometimes be clumsy and constrained by its limited budget, the intensity picks up after Armando is dispatched and the focus shifts to Caesar, who becomes the Malcolm X (or perhaps the Nat Turner) of apes. He forms an underground resistance, gathering weapons and directing acts of sabotage and civil disobedience. He’s eventually captured and tortured, but he stays one step ahead of his pursuers.

“We cannot be free until we have power,” Caesar declares to MacDonald during Conquest’s harrowing climax, which Thompson shoots with chaotic immediacy. Thompson drops the score for eerie, nearly silent scenes of the apes gathering, while cops in riot gear stand in opposition. The images of those officers firing into a crowd of unarmed protestors would have been especially resonant in 1972, and they remain so today, even when those protestors are apes in brightly colored jumpsuits.

Conquest ends with a fiery speech from Caesar as literal fire burns around him, although the final version differs from the more unforgiving original cut. Dehn and Thompson allow Caesar a moment of mercy, a chance to be a better leader than those he’s deposing, and while it may have been a studio-mandated compromise, it plays as a moment of moral righteousness in a movie mostly infused with bleak pessimism.

It’s the kind of moment that the later reboot trilogy picked up and expanded on with its own Caesar character, played by Andy Serkis. Viewers impressed and moved by the power of those recent Apes films would do well to look back 50 years and see where much of those themes originally came from.