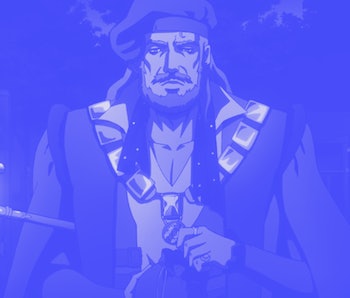 Castlevania Season 3 is finally here, and one of the most surprising new additions to the cast is the mysterious Count Saint Germain, a presumptuous and flamboyant traveling magician whom Trevor and Sypha encounter in the town of Lindenfeld early in the season.

But who is this Saint Germain and what do we know about him from the games?

Castlevania Season 3 arrives on Netflix early in the morning on March 5, bringing with it a new story exploring the fallout of Dracula's death at the end of Season 2. Trevor and Sypha have spent about a month defeating Night Creatures in the wild, protecting humanity from what remains of Dracula's demonic hordes, but they quickly arrive in the small town of Lindenfeld. There, a formerly religious priory has sinister intentions and an uneasy relationship with the local townsfolk, but by far the most interesting new person we meet is Saint Germain, voiced by Bill Nighy.

In his very first scene, Saint Germain tries to buy apples from a shrewd tradeswoman, but he only has Grosh coins from the east instead of the local denarius currency, so she refuses him. With some sleight of hand and a bit of magic, he's able to transform and multiply a single large coin into four smaller coins. It speaks to his vibe with easy confidence bolstered by the magic that feels decidedly different from Sypha's elemental spells.

Saint Germain's clothes look expensive, his golden necklace has a large hourglass in the center, and he saunters about with a kind of suave confidence that makes him seem like a nobleman who knows exactly how powerful he is. (He describes himself as "immortal and glorious" at one point early in the new season.)

The character is a very loose adaption of the character from the 2005 PlayStation 2 game Castlevania: Curse of Darkness. That game follows Hector as a hero on a quest for revenge against Isaac, who killed his wife. (Yes, these are the same two Forgemaster featured in the series but in wildly different storylines.) In Curse of Darkness, Saint Germain appears as a time-traveler with seemingly infinite knowledge of the universe, and his outfit looks like something a gentleman magician might wear with a posh top hat. He seems keen on upholding a certain kind of cosmic status quo and stands in Hector's way on occasion to achieve that, but his secrets and true intentions were always mysterious.

Warren Ellis, creator of Netflix's Castlevania series, has never (and probably will never) play the games, instead preferring to adapt whatever piques his interest.

"I'm free to just cherry-pick whatever I want," Ellis tells Inverse in a recent interview. "I've always been interested in history and the history of magic in the real world. There were many people like Saint Germain in the period up to the 1500s who were essentially itinerant 'magicians' wandering between the great courts of Europe in search of patronage — that always fascinated me." That's this version of Saint Germain: A wandering magician in search of knowledge rather than some time-traveling godly figure ... or is he?

You'll have to watch Castlevania Season 3 to find out whether or not Saint Germain winds up being an all-powerful time magician, but adapting him as a posh magic-user in search of lost knowledge establishes him as a compelling agent of chaos in Season 3 and beyond.

Castlevania Season 3 will be released on Netflix March 5, 2020.

More like this
Gaming
8.9.2022 9:18 PM
Did you know Netflix has games? Here's how to find them
By Robin Bea
Gaming
8.15.2022 6:00 PM
New South Park game could take inspiration from the series’ first episode
By Joseph Yaden
Gaming
8.17.2022 12:00 PM
Super-streamer Ludwig Ahgren hates the same awful gaming trends that you do
By Steven Asarch
Related Tags
Share: