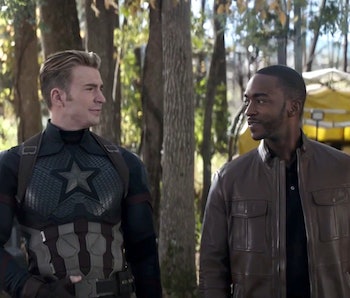 Sam Wilson’s Captain America is set to lead one of the last Marvel Studios blockbusters of Phase 5 in Captain America: New World Order, but does this mean anything for his predecessor Steve Rogers? Could we get some kind of Steve Rogers cameo, or will the former Cap stay on ice? The answer is complicated, both in our reality and in Earth-616.

As we all remember from the conclusion of Avengers: Endgame, Steve went back in time to return the Infinity Stones to their proper positions in the delicate timeline. But then he took the long way back, living out an entire life with Peggy Carter before appearing as an old man to hand the Captain America shield over to Sam. These days, multiverse madness is exploding all over the MCU, the Sacred Timeline is destroyed, and as far as we know Old Man Cap is still walking around... somewhere.

What we know about New World Order — “Sam Wilson is the new man with a plan,” the ever-so-brief San Diego Comic-Con 2022 stinger teased, confirming a release date of May 3, 2024. He’s definitely Captain America now, and it’s all but certain that Bucky Barnes will return as Sam’s closest companion. Sharon Carter, who was revealed as the Power Broker, could also factor in, as could characters like Helmut Zemo, John Walker, and even Valentina Allegra de Fontaine (who appears to be assembling the anti-hero Thunderbolts squad).

It’s worth noting that “New World Order” was also the title of the first Falcon and the Winter Soldier episode. In case you forgot, the six-episode series focused heavily on the fallout of the five-year “Blip” that occurred between Avengers: Infinity War and Avengers: Endgame. The Flag Smashers wanted to establish a new world that broke down barriers between nations and returned human society to how it was during the Blip. The new Cap movie could directly follow up plenty of lingering plot threads from the series, but considering how many MCU movies and shows are due out between now and then, a lot of priorities could change.

New World Order certainly implies an ominous dystopia, but does that leave room for Steve’s return?

What Chris Evans has said about it — In early July, The Hollywood Reporter reported that the previously untitled Captain America 4 had found its director in Julius Onah. On Twitter, THR speculated, “It is unclear if Chris Evans would reprise his role as the first #CaptainAmerica (though if the question of who is entitled to carry the shield continues, all bets are off).” In response, Chris Evans took to Twitter to state that “Sam Wilson is Captain America.”

Falcon and the Winter Soldier made it abundantly clear in its finale that Sam Wilson had completed his transformation into the new Captain America. Evans almost certainly won’t pick up the shield again, but recall that Avengers: Infinity War presented him as a shield-less nomad with a big beard.

However, a month earlier Evans made it seem clear he was totally done with the character. “It was such a good run, and I am so happy with it, and it’s so precious to me,” Evans said to ComicBook.com. A potential return, he said, “would have to be perfect.” Perhaps some sort of small cameo would fit the bill?

What the rumors say — Even if Marvel had a firm plan for Chris Evans to return, it would probably be kept tightly under wraps. However, way back in January 2021, Deadline reported that Marvel Studios and Evans were working out some kind of secretive deal for him to reprise the role of Steve Rogers, noting that rather than taking on a leading role, it would be more like “what Robert Downey Jr. did after Iron Man 3, appearing in such films as Captain America: Civil War and Spider-Man: Homecoming.”

At the time, that made it seem likely that Rogers might appear as an old man in Falcon and the Winter Soldier. But instead of using Evans, Sam’s conversation with an elderly Isaiah Bradley helps him reaffirm and reclaim his identity as the new Captain America.

We never get an overt confirmation of what happened to Steve, but since Peggy died during the events of Civil War, he could come out of retirement to offer what little help he still can to the world. It would make logical sense, even if it walks back his perfect Endgame ending.

For all we know, maybe Marvel and Evans never struck a deal, and he’ll never return. On the other hand, what if Marvel produced a live-action or animated series about Steve Rogers’ journey through the past returning the Infinity Stones? It’s also possible that he still engaged in superheroics alongside Peggy within the new timeline he created, yet another plot thread Evans could explore.

Other ways Chris Evans could rejoin the MCU — There’s also the odd possibility that Evans might play a variant of his original character, even an evil or surreal one. With the destruction of the Sacred Timeline in Loki and the expansion of the multiverse in stories like Doctor Strange 2, there’s a lot that could feasibly happen. Or maybe, just maybe, he could even return to the MCU as another character entirely.

In a June 2022 interview with MTV News while on a press tour for Lightyear, Evans responded to a question about reprising the role of Johnny Storm, the Fantastic Four character he played in the 2005 and 2007 movies.

“God, wouldn’t that be great?” Evans said. “No, no one’s ever come to me about that. I mean, I don’t exactly look the same anymore. That was 15, almost 20 years ago. Oh my God, I’m old. But I really love that character.”

Then in late June 2022, Avengers: Endgame co-directors Joe and Anthony Russo said they’d love to see Evans take on the role of Wolverine in the MCU. “Evans has incredible range and great physicality, and he’s real good at body control,” Joe Russo said on the ComicBook.com Phase Zero podcast. “He’s an incredible actor. I don’t mean this in a bad way, but he’s nothing like Captain America. Steve Rogers is very controlled and quiet, understated. Chris is energetic and funny and charismatic, and he brings a lot of energy to set. I’d love to see him do something like Wolverine.”

All things considered, it doesn’t seem like Evans will step foot back into the MCU multiverse anytime soon. But whatever happens, his legacy will hang over it.

Captain America: New World Order will be released on May 3, 2024.